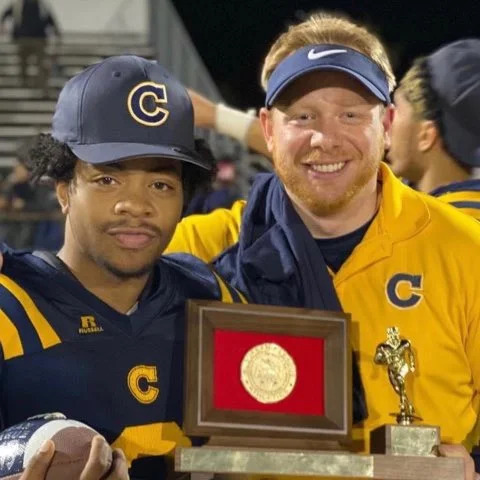 New Radnor coach Kyle Yeiter, right, poses with Cheltenham's Sam Sykes and the District 1 Class 5A trophy after Cheltenham's win over Academy Park in 2019. Yeiter, then the Panthers' defensive coordinator, was hired as Radnor's head coach this week. (SUBMITTED PHOTO)

Kyle Yeiter is a high school football coach and teacher at Radnor Middle School. When the head coach position opened at the high school, he considered it a perfect fit.

The Central High and Ursinus grad applied when Tom Ryan resigned after 15 years as head coach on Jan. 12, then waited patiently as the district made its decision.

The wait proved to be worth it, as Radnor announced Thursday that Yeiter is its next varsity football coach.

“Radnor is the only place I could ever see myself as head coach because I love it here so much,” said Yeiter, who has taught in the school district since 2016. “It was a long process …but I’m thrilled to get started.”

Yeiter got his coaching start at Father Judge and ended up at Cheltenham, where he coached alongside his brother, Mike, as the defensive coordinator from 2017-20. In his final season, the team captured the District 1 Class 5A title. In 2019, Cheltenham lost in the PIAA Class 5A final to Archbishop Wood, where Yeiter coached defensive backs last season.

Yeiter’s top priority is to get his players excited about the future of the program.

“Coach Ryan is legendary and I know I have some big shoes to fill,” he said. “I just want to get together with the kids and get started. I know many of them and I taught many of them when they were in eighth grade. Right now, it’s about injecting enthusiasm and excitement into the whole process of what we’re going to be doing. That’s going to start when I get to meeting with them and get rolling in the weight room and with our mini camp, which may depend on how far our lacrosse team goes. They’re usually pretty good and we have a lot of guys on the team, so our camp may get pushed back. But once we get that first practice together… I think it’s going to be eye opening for them to see how it’s going to be here.”

Yeiter is looking forward to competing in the Central League and leading Radnor back to the district playoffs. Ryan did wonders over the years, but the team struggled to a 3-8 record in 2021.

“I am excited to coach kids from the neighborhood, kids that live in Radnor,” Yeiter said. “The Central League reminds me a lot of Suburban One. You have the top teams every year, but you have teams that get better and better, too. It’s going to be what we make of it and the talent that we have to change things around. I’m really looking forward to the community aspect of it, too, which is something I saw while I was at Cheltenham and missed when I was at Wood. It’s that Friday Night Lights aspect where the whole community is at your games, that’s just an awesome experience.”