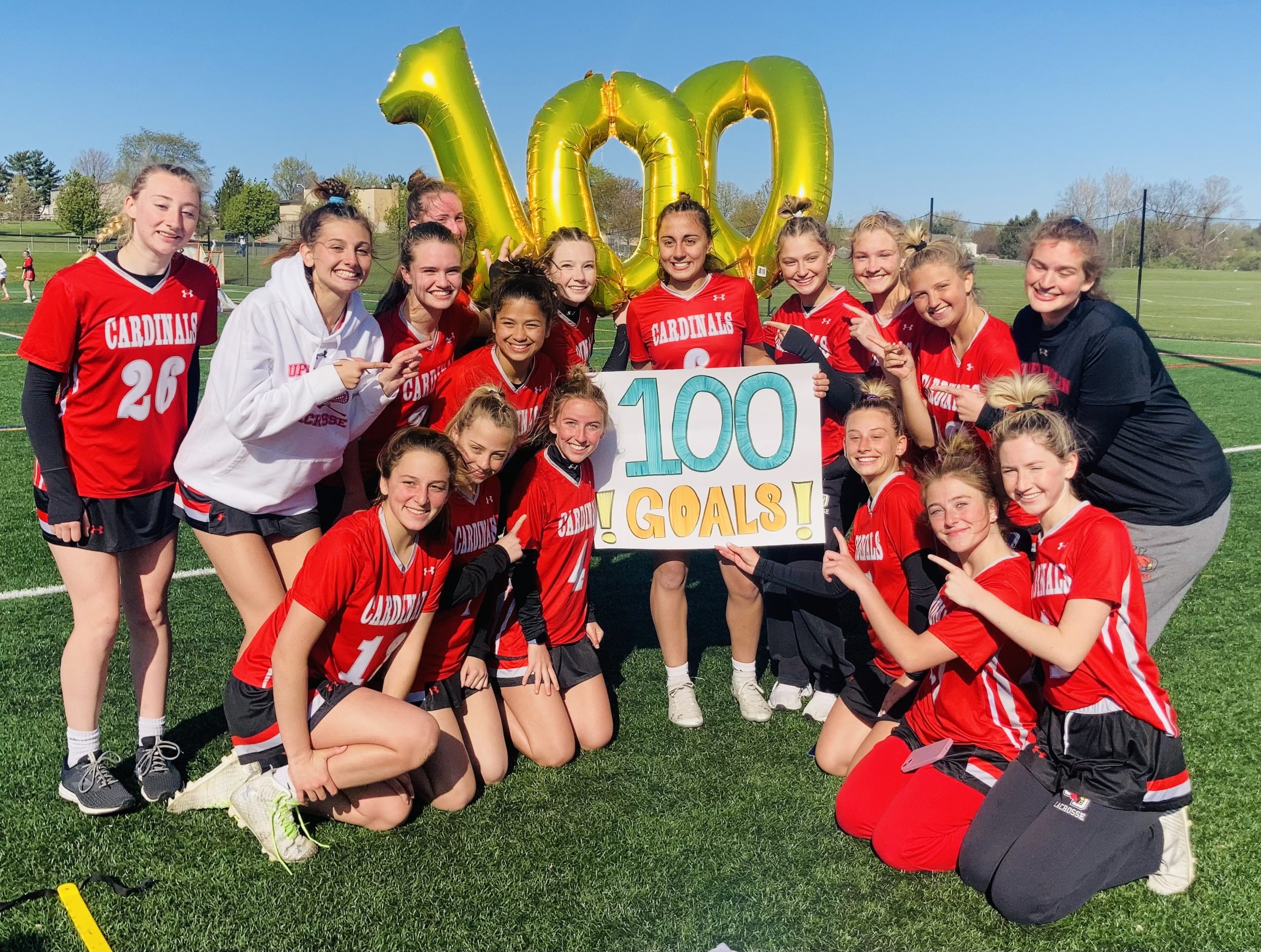 Upper Dublin's Aditi Foster is surrounded by teammates after scoring her 100th career goal in a win over Plymouth Whitemarsh on Thursday, April 28, 2022. (Kev Hunter/MediaNews Group)

WHITEMARSH >> As much as it meant to Aditi Foster to score her 100th career goal on Thursday, it meant even more to her to score No. 104.

That was the one that served as the game winner for Upper Dublin, as Foster made sure that a day of history for her and the Cardinals was also a day of victory.

The standout sophomore scored a career-high 10 goals, the last of which came with 1 minute, 51 seconds left to break a 13-13 deadlock with Plymouth Whitemarsh.

“Winning 14-13 with a minute left feels good,” said Foster, soon surrounded by her teammates and celebratory balloons signifying ‘100.’ “I think our offense did a really good job of working it around. We were really finding our cutters too. And I think a couple times, we weren’t finishing, but when we really needed to, we were finishing. PW was sending three people to the ball and we did a good job of finding the cutters and playing unselfishly.”

The victory raised Upper Dublin’s record to 6-3, including a 4-2 mark in the SOL American. The Cards travel to Haverford Saturday.

PW is 6-4 overall and 5-2 in the American and will travel to Pennsbury Friday.

Abby O’Meara controls for Upper Dublin, with the PW defense closing in during their contest on Thursday, April 28, 2022. Kev Hunter, MediaNews.

“It started on defense. Erin (Eby) made some really good stops. And I think it came down to (goalie) Dara (Fishman). She’s made some really key saves, especially when (PW) was coming down in transition.

“I think we did really well on our fast breaks today. We really connected on them. And once we got on offense, we were able to settle it down and get the ball around. I think that’s been working really well for us lately.”

The contest swung back and forth early, with the two rivals battling to a 4-4 draw.

Upper Dublin surged in the final minute of the first half, taking a 6-4 lead into the break.

The Cardinals had their biggest lead at 9-4, capped by Foster’s 100th career goal.

But the Colonials, led by Brianna Austin’s six goals, rallied back and eventually evened things up at 11 apiece. Upper Dublin went up 12-11, 13-12 and 14-13, then maintained possession as the final seconds wound down.

“We’re young and we knew that PW is really young too. It came down to who was gonna possess the ball at the end and do the best thing with it,” Cardinals coach Dee Cross said. “Because it really could have gone either way. At the end, it was so key to get that last draw. That’s a freshman that came up with that ball. Anna DiMartile came up with the draw.”

A young Cardinals team overcame a tremendous rally by the Colonials and got control – of the game and the ball – one final time.

“We needed every one of them,” Cross said. “We wanted the win and she had the hot hand today. So she put it together for sure.”