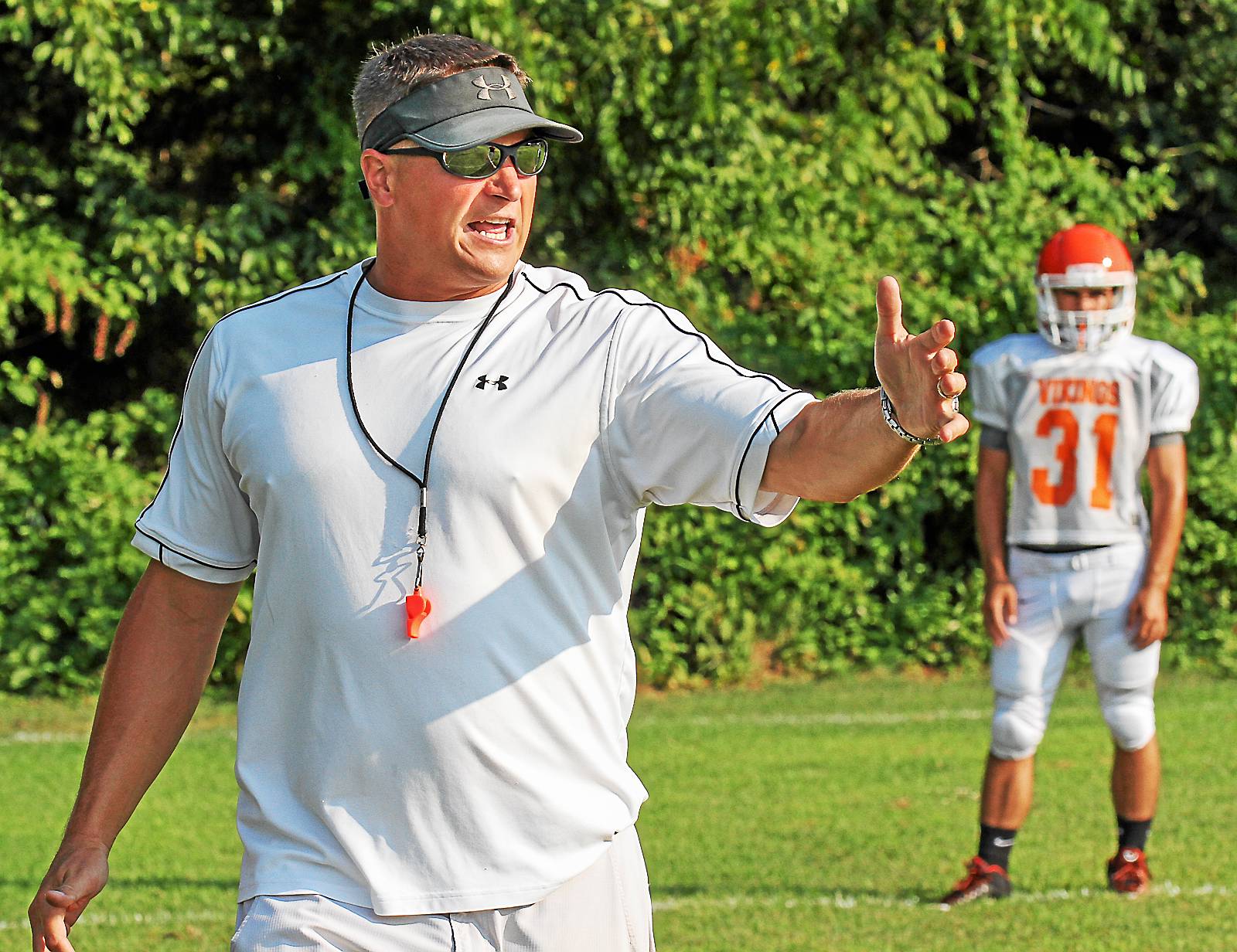 Scott Reed stepped down as Perkiomen Valley head football coach after the 2015 season. The seven years since have not been filled with regret.

In reality, prior to a month ago, returning to the head coaching ranks of high school football was the last thing on his mind.

“Probably about as far away as you possibly could be,” Reed said. “As many people say, the longer you are out (the more removed you get) and the more I watch guys, like everyday (as an educator at Perkiomen Valley) I get to see Rob Heist and how hard he works, how much he puts into the program at Perk Valley. And I would think, ‘Phew, I don’t miss doing all that.’”

Reed misses other things though. They stay with him in his memories.

Memories like his own playing days at St. Pius X and the iconic coaches that shaped him as a player and person as an All-Pioneer Athletic Conference linebacker who went on to play fullback at West Chester University from 1998-2001.

“I have a lot of great memories of St. Pius X. I shared a lot of those memories with some great men, like Jim Mich, Dave Bodolus, Dave Psota, and Ed Dobry, even Jim Mich Jr., and leading the way in all that would have been my own father (Ron Reed). That was a very special time in my life.”

It wasn’t just football. It was family. It was getting to be coached in his high school career by his father, the late Ron Reed, a St. Pius grad and Kutztown University Hall of Famer who died unexpectedly in 2000 at age 51.

It’s what drew him to joining the Pope John Paul II staff as an assistant in 2021 so he too could coach his son, Braden, a freshman for the Golden Panthers.

It’s also what has led Reed to fill the recently vacated head coaching position at Pope John Paul II, a move announced by the school on April 25.

Reed replaces Rory Graver, who departed PJP after eight seasons to take the head coach job at Wissahickon on April 5.

“I have all the respect in the world for Coach Graver and I thought he did a fantastic job at Pope John Paul,” Reed said. “I looked around the area, and coaching in general – being a head coach has gotten harder in every sport – it seems like there’s a lot of turnaround.

“I felt like if I could bring some stability with someone who was there this past year, maybe I can come in and help out and be a leader for the program.”

“We are thrilled that Scott Reed will be leading our football program here at PJP,” said PJP Athletic Director Joe Trainer in a statement. “Scott is a proven winner with tremendous credentials but more importantly, Scott is a great man and he will be an outstanding mentor to the young men he coaches.”

While Reed had not been pining to return to the head coaching cauldron, he recognized upon learning of Graver’s departure that ultimately he was the right person to guide the Golden Panthers.

“I knew a lot of eyes would look toward me, and obviously I looked within myself. I have experience doing this,” Reed said. “I can’t guarantee I’m going to be God’s gift to football, but I’m going to give it my best and try really hard to put out a product that Pope John Paul II can be proud of.”

It’s not exactly a ‘homecoming’ for Reed considering St. Pius X shut its doors in 2010. But St. Pius is one of Pope John Paul II’s ‘legacy schools’ (along with Kennedy-Kenrick) and elicits a familiar feeling for Reed.

“Being around the kids for the past year, I did feel like I was going back in time a little bit; it felt nostalgic,” Reed said.

“The first time driving in, when you turn in, the first road is Winged Lion Lane and that resonated with me.”

Perkiomen Valley’s head coach Scott Reed looks toward the field during a game against Spring-Ford in 2015. (MNG file)

Reed took over at Perkiomen Valley at age 24 and from 2004-15 elevated the Vikings from a sub-.500 program into one of the Pioneer Athletic Conference’s elite and an annual District 1 playoff qualifier. Reed won two PAC championships (2007, 2014) and reached the District 1 postseason four times in his PV tenure where he amassed an 81-54 record. He also sent the Vikings, under current head coach and former Red assistant Rob Heist, on their current trajectory that includes 11 straight winning seasons and four of the last six PAC championships.

He inherits a Pope John Paul II program in strong standing after Graver’s eight-year tenure that features five straight winning seasons, a District 1-4A championship in 2019 and trips to the last two PAC championship games (2019, 2021).

Reed joins PJP with a whole lot more knowledge about the job at hand than the kid who took over at PV 18 years ago.

“When I became a head coach at Perk Valley I was 24 and I had (assistant coaches) Jason Basile and Matt Young and they were with me all the way through. For us, we were starting brand new. And then Rob Heist came along,” Reed said. “I didn’t know what I was getting into, but man, was I fortunate to have those guys. They were an amazing staff. And we all learned together.

“Now I have a vision of what I want to do and what I’ve done. I need to teach a new group of men how I want to teach the sport of football and how we want to run our program. There’s that component plus needing to teach a group of kids a new system on offense and defense. As we approach a week away from May, that’s a daunting challenge.”

The timeline is a concern to Reed as he looks to rapidly install his methods at PJP. Being four months from the football season would seem like plenty of time in some contexts, but not in the 12-month cycle that presently presides over high school football.

“I have so many things that need to be done and need to be done fast. I’m working like crazy trying to get all my stuff up to date,” Reed said. “When you have your program and it’s established, there’s a lot of infrastructure with your fundraising, your lifting, recruiting, that’s all in place. None of that’s in place for us right now so I have a lot of work to do.”

Reed will continue in his role as a health and physical education teacher at Perkiomen Valley.

“I’ve been at Perk Valley for 21 years and I plan to continue to teach there as long as they’ll have me. I absolutely love everyone there,” he said. “The coaches there are my truest friends. They’ve been a huge help for me. They’ve really supported me through this whole thing, which I know is a tough thing with me as a possible opponent.”

Not being a teacher at the school he coaches will be a unique challenge compared to his previous position. Additionally, coaching at a non-border school that doesn’t have a built in student body through geography is as much challenge as it is opportunity.

“It’s not something I’ve ever experienced before,” Reed said. “I sat down with the PJP president (Vincent Cazzetta) the other day and he had an amazing comparison: ‘If you look at all the public schools, they know for the next hundred years they’re going to have this many kids coming through. We don’t even know how many kids are going to be here next year.’

“For a non-border school it’s a constant challenge as you keep trying to bring kids in.”

A great football program can help and if history is a good indicator, that program is in great hands with Reed.