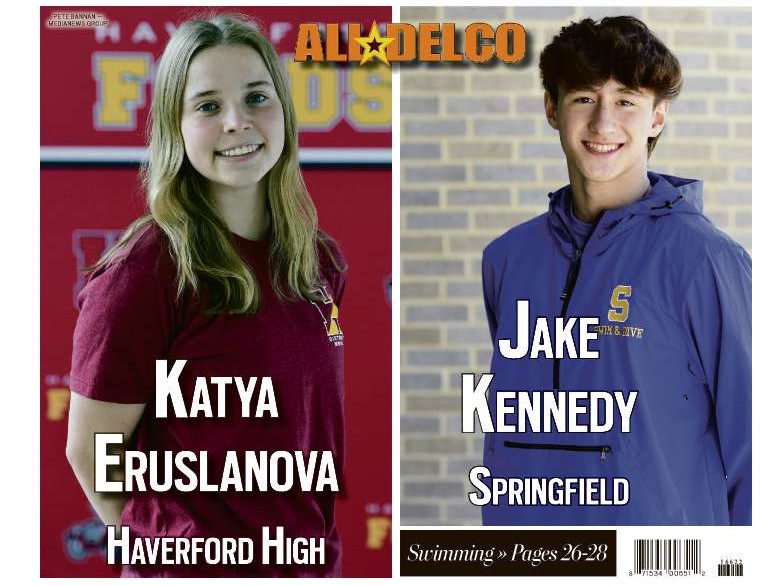 There’s something different about the mentality of Katya Eruslanova and Jake Kennedy compared to the typical swimmer.

Kennedy, a Springfield sophomore, has the aloofness of a sprinter, yet hasn’t caught up to what he’s physically capable of. Even at such an early juncture, he has three individual states swims under his belt and a physical build poised to achieve much more.

Haverford junior Eruslanova shares the trait of not quite knowing how impressive she is in the water. She’s a three-time state champion who’s gone from wondering if college swimming was possible to fielding a line of suitors, a group that could grow with a big summer at higher-profile meets.

It’s odd to clock that similarity, since the swimmers fall at opposite ends of the spectrum in terms of specialty. Kennedy is the consummate sprinter, a 50 and 100 freestyler who says, “I just like being able to swim it, get the adrenaline. It’s fun to me.”

Eruslanova hovers near the other extreme. She’s not quite a distance purist in the mile and 400 IM mold. But her best events may be the 200-yard strokes, swam in college but not high school. That leaves her to fill the 200 IM in high school, the event in which she’s a two-time reigning PIAA Class 3A champ. Her journey is encapsulated by a summer goal to secure the last two National Club Swimming Association Championships cuts she’s missing, for the 1,650 freestyle and 200 butterfly, whether she’d swim them at championships for Suburban Swim Club or not.

Despite that global proficiency, the high school format has brought out something special in her.

“In a high school meet, we have more chances to race,” she said. “I feel like that works really well for me. I’m able to practice my events in just a practice suit, and being able to race and have that mentality that, I’m at a meet, it’s time to swim.”

Both are uniquely talented. Both are Daily Times Swimmers of the Year.

Pastris is on the All-Delco team for the fourth consecutive year. Kolessar is a three-time honoree, missing out last year largely because the Inter-Ac season was abbreviated by the COVID-19 pandemic. Cosgrove, Kennedy and Rosenberger are two-time picks.

All four classes are represented, with an unusually young boys team comprising one senior and five sophomores. Abruzzo is the lone freshman. Three seniors – Kolessar, Collins, Pastris – lead the girls team. The All-Delco team is selected in consultation with local coaches.

Kennedy’s accolade is unprecedented: He’s the first Springfield swimmer named a Daily Times Swimmer of the Year, which dates to the mid-1990s. His selection to the team last year marked the first Springfield boys All-Delco since 2011 (John Quagliariello). Kennedy is the first Boys Swimmer of the Year from a public school since Haverford’s Shane Ryan in 2012. (Eruslanova and Kennedy, coincidentally, hail from schools that lack on-premises pools, with the Fords sharing time at Haverford School and Springfield at Swarthmore College.)

Kennedy burst onto the scene as a freshman, finishing third at the District 1 Class 3A Championships in the 50 free. He would end up 15th at states in that event.

Sophomore Jake Kennedy is the first Springfield swimmer ever recognized as Swimmer of the Year, boy or girl. (Pete Bannan/MediaNews Group)

A year older, Kennedy returned from states with a medal and four finals swims. He finished sixth in the 50, cracking 21 seconds to 20.93.  He added 12th in the 100 free and helped the Cougars tie for 10th in the medley relay and grab 11th in the 200 free relay.

Between Kennedy and Johnson, a fellow sophomore, the future is bright for Springfield swimming.

“I had a lot more support going into it,” Kennedy said. “I had some more teammates, and it really pushes me harder. To have other friends on other teams, it pushes me to get better.”

Kennedy partners for training at Ridley YMCA with Eckler, who qualified for states in both sprint events and finished 14th in the 100.

“It’s really fun to be able to swim him in the 50 and 100 free,” Kennedy said. “… He’s usually better than me in practice. I’m usually one or two behind him. But when we do sprints in practice, we definitely are racing each other.”

If Kennedy’s joy in the pool seems inherent in his splash-and-dash events, Eruslanova’s has more novelty. It was evident on her face at states, the delighted surprise at how fast she can get.

“I wasn’t expecting to get even close to under two minutes until maybe end of senior year of states,” Eruslanova said of the IM. “So seeing that I’m right there really builds on for next year. And I was just trying to defend the title at the same time because, it’s nice to win twice.”

Eruslanova has managed not to weigh herself down with expectations. She admits not thinking until her sophomore year that college swimming was a possible path; she’s now in the late stages of vetting several Ivy League schools. Primarily a 200 backstroker, she’s grown into an IMer, or maybe a 500 freestyler. Her history is full of stories that sound accidental, like dropping so much time in a 1,000 free that she has to take it seriously as a training option.

Her mindset at big meets just seems looser than most. She’s serious about preparation and her swims. But where the ready area at big meets can devolve into silent, shaking nervousness, Eruslanova seems freer, less trapped by external expectations.

“I just get in and swim my races,” she said. “I don’t really think about, if I got this time then this will happen, or I have to drop two seconds. I just do it all on my own terms. If I drop, I’ll be happy with it. It’s not because I need to get a certain time.”