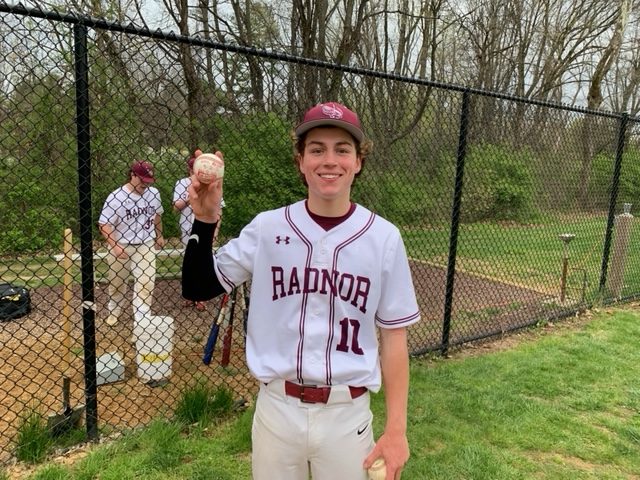 The senior pitcher tossed a no-hitter to lead Radnor to a 4-1 victory over Upper Darby in a Central League game Thursday. Reger allowed an earned run on three walks.

Strath Haven 13, Haverford 3 >> Mike Valente went 3-for-4 with a homer, double, three RBIs and four runs scored for the Panthers.

Dan Stickney had a RBI double for Ridley. Mitchell Brooks, Connor Kelly and Happersett drove in a run each.

Drew Van Horn belted a home run for the Jaguars. CJ Wood was 2-for-4 with a double.

Upper Darby 12, Penncrest 2 >>  Max Franzini and Drew Kressler each finished 2-for-4 with a pair of runs scored for the Royals, who plated seven runs in the bottom of the fifth to 10-run the Lions Wednesday. Sam Chestnut and Brian Fitzpatrick both contributed a double and three RBIs.

Springside Chestnut Hill Academy 3, Haverford School 0 >> The Fords (7-5, 0-2) managed only five hits, including a double by Will Ferris.

All-Delco Haley McMenamin was 3-for-4 with a home run as Ridley defeated Penncrest, 9-5.

Karlie Cecchini and Gemma Taggart combined for eight strikeouts from the circle. Paige Laughlin and Maddie Gordon had two hits apiece for the Green Raiders.

Haverford 11, Marple Newtown 0 >> Senior ace Emma Taylor dazzled with 17 strikeouts as the unbeaten Fords (8-0, 7-0) trounced the Tigers under the lights at Genthert Field.

Keri McCallum was 3-for-4 with a two-run homer and three ribbies. Shannon Gavigan went 2-for-4 with two RBIs and two runs scored. Kylie Ingram contributed two base knocks, three RBIs and a stolen base.

Interboro 15, Penn Wood 0 >> Jules Bergen threw a three-inning shutout with seven Ks and went 2-for-2 with two RBIs. Erin O’Shea ripped two doubles and drove in a pair of runs.

Cardinal O’Hara 9, Interboro 3 >> Hayden Sessions entered in relief and racked up 12 strikeouts over four innings as the Lions won on Wednesday. Caitlin Jordan led O’Hara with a triple and double, and Maddie Gibson smacked a two-run double.

Bryan Seavey had the hot stick for Springfield in a 17-4 shellacking of Lower Merion.

Conestoga 9, Garnet Valley 7 >> Joey Halloran registered a hat trick and Max Busenkell supplied a goal and fives, but it wasn’t enough for the Jaguars, who trailed 9-1 after thee quarters.

Matt Glavin notched a hat trick for the Green Raiders.

Radnor 12, Penncrest 6 >> Dylan McDougall and Jason Poole both scored twice for the Lions in a losing cause.

Haverford School 9, Germantown Academy 5 >> Ryan DiRocco provided three goals and one assist, and Avi Mehl had two and one for the Fords. Chuck Cacciutti finished with 15 saves.

Kate Galica had five goals and nine draw controls to lead the Pioneers.

Torres will represent the Del Val in the District 1 tournament next Friday at the Springfield YMCA.