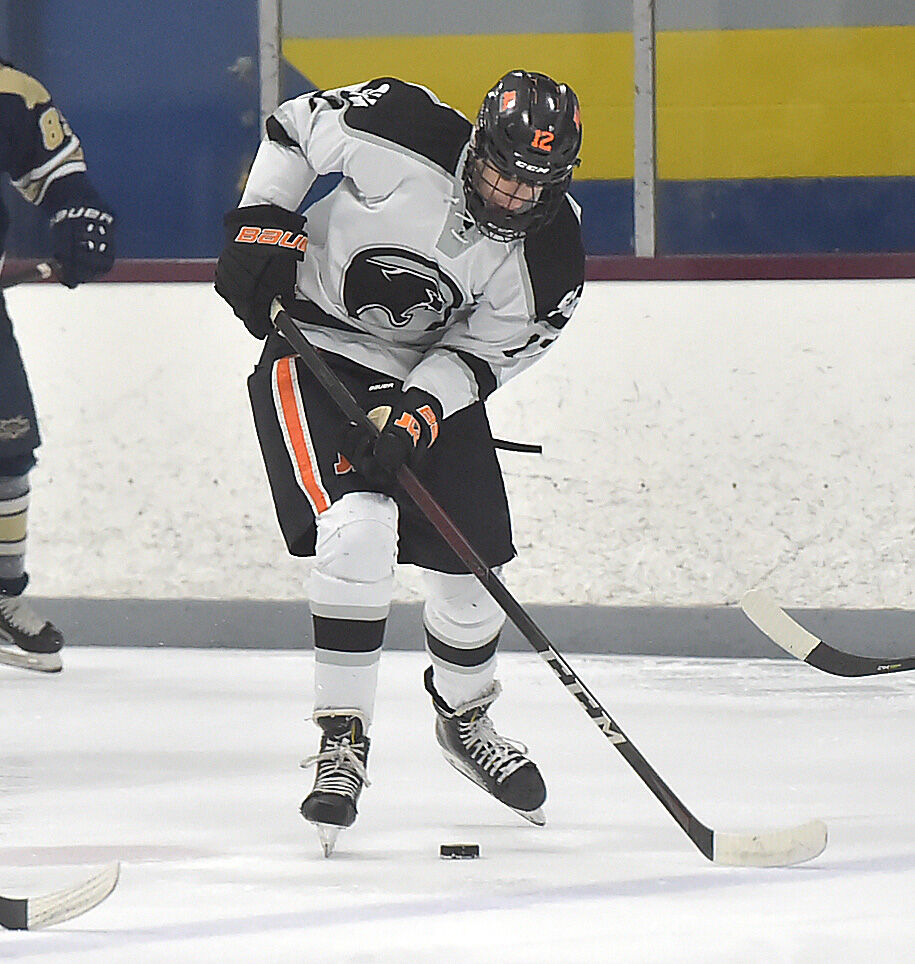 In addition to Player of the Year Jagur McClelland of Haverford, the All-Delco team includes:

Zach Crain, Springfield: The senior forward is on the All-Delco team for the second consecutive season after reinforcing his status as one of the county’s best playmakers. Crain was second in the county in goals (30), assists (28) and points (58). He was third in points per game at 3.05, leading the Cougars to the top seed in the Central League playoffs and a 17-win season. The Cougars also advanced to the Flyers Cup A final. Crain torched Central League foes, accumulating 47 points in 14 regular-season games (3.35 ppg). He was outstanding in the Flyers Cup, with a hat trick in the 4-1 win over West Chester Henderson and four assists in a 6-1 win over Palmyra. He had three goals and five assists in three Flyers Cup games before falling to West Chester East. He added a hat trick in a crossover game with Cardinal O’Hara.

Josh Peabody, Strath Haven: The senior forward played only 12 games, but he was electric whenever he touched the ice. Peabody scored 26 goals and 35 points, his 2.92 ppg fourth in the county. An excellent skater with a rangy stride and deft hands, Peabody is difficult to slow down once he gets a head of steam. Ridley can attest: Peabody blistered them for four goals and two assists in the opening round of the Central League playoffs, a 7-3 win. He scored all four goals in a 4-3 OT win over Conestoga in his first game of the season in November and hit Penncrest for a pair of hat tricks. Strath Haven was 0-9 in the games he missed, scoring 1.78 goals per game. With him, the Panthers went 6-6, including the Central League playoffs and Flyers Cup, scoring 3.75 goals per game.

Ryan O’Connor, Springfield: Even as injuries befell the Cougars’ goaltending contingent, forcing them to dig three-deep by the postseason, O’Connor made sure Springfield was one of the stingiest teams in the area. The Cougars allowed only 21 goals in 15 Central League games and 37 goals in 21 total games. The defensive displays included a pair of 10-0 wins over Strath Haven, which finished fourth in the league, a 5-0 blanking of third-place Conestoga and two one-goal concessions to start the Flyers Cup. O’Connor, with his massive wingspan, elite defensive instincts and plus-skating ability, was a big reason. O’Connor added five goals – two in a 3-2 crossover win over Henderson – and 15 assists. O’Connor was a second-teamer last year; a first-team All-Delco lacrosse player as a long-stick midfielder, he has signed to play lacrosse at Penn State.

Nick Dignazio, Strath Haven: If you needed to find Dignazio in a big game, you knew where to look, because it wasn’t the bench. The speedy junior defenseman would rarely leave the ice in big moments, using his athleticism, economy of movement and outright determination to anchor a Panthers defense that improved greatly as the season wore on. He was third on the Panthers with 10 goals, led the way with 16 assists and was second to Peabody with 26 points. He scored the first two goals of a 7-3 win over Ridley in the first round of the Central League playoffs, adding three assists (all to Peabody). He added a goal as the Panthers battled Springfield to a 5-4 loss in the Central League semifinals after two 10-0 losses to them in the season. Dignazio also had a goal and an assist in the Flyers Cup loss to Palmyra.

Nate Rabadam, Haverford: The senior bolstered his status as the top two-way defenseman in the county, earning a second straight All-Delco berth for the Central League champions. Rabadam is the consummate power-play captain, with his passing and powerful point drive. His superb skating, unflappability with the puck and defensive awareness makes him outstanding at avoiding trouble and putting out fires created by others. The Fords didn’t quite hit the Flyers Cup high of last year, but they still won 16 games and upset Springfield for their second straight Central League crown. From the blueline, Rabadam was fourth on the team in goals with 12, tied McClelland for the team lead in assists with 23 and finished second on the team and 12th in Delco with 35 points. He tallied a hat trick in a 4-1 nonleague win over Avon Grove, set up McClelland’s game-tying goal in the Central League final and tallied a goal and five assists in three Flyers Cup outings. “He was great,” McClelland said of his classmate. “He filled my role perfectly and he helped everybody out the same way I helped them out. … Nate really stepped up bigtime.”

Christian Green, Cardinal O’Hara: The senior goalie backstopped the Lions to a PCL title, saving his best for last. He made 55 saves in the title game, leading the Lions to a 1-0 win over Father Judge in a nervy double-overtime affair. It was O’Hara’s second overtime win over Judge and came after they allowed nine goals to the Crusaders in the first two meetings. Green didn’t allow a goal in two PCL playoff games, making 27 stops in shutting out Salesianum in the first round. He pitched four shutouts total, blanking Spring-Ford and Moreland in crossover play. He also held Flyers Cup champion West Chester East to just four goals. For the season, Green went 11-8-1 for the Lions, who courted a difficult nonleague schedule. He posted a 2.77 goals-against average and an .896 save percentage, both fourth-best in the county. Green is the third straight Cardinal O’Hara goalie named to the first team, joining Ronan Marley in 2021 and Tory Percival in 2019.