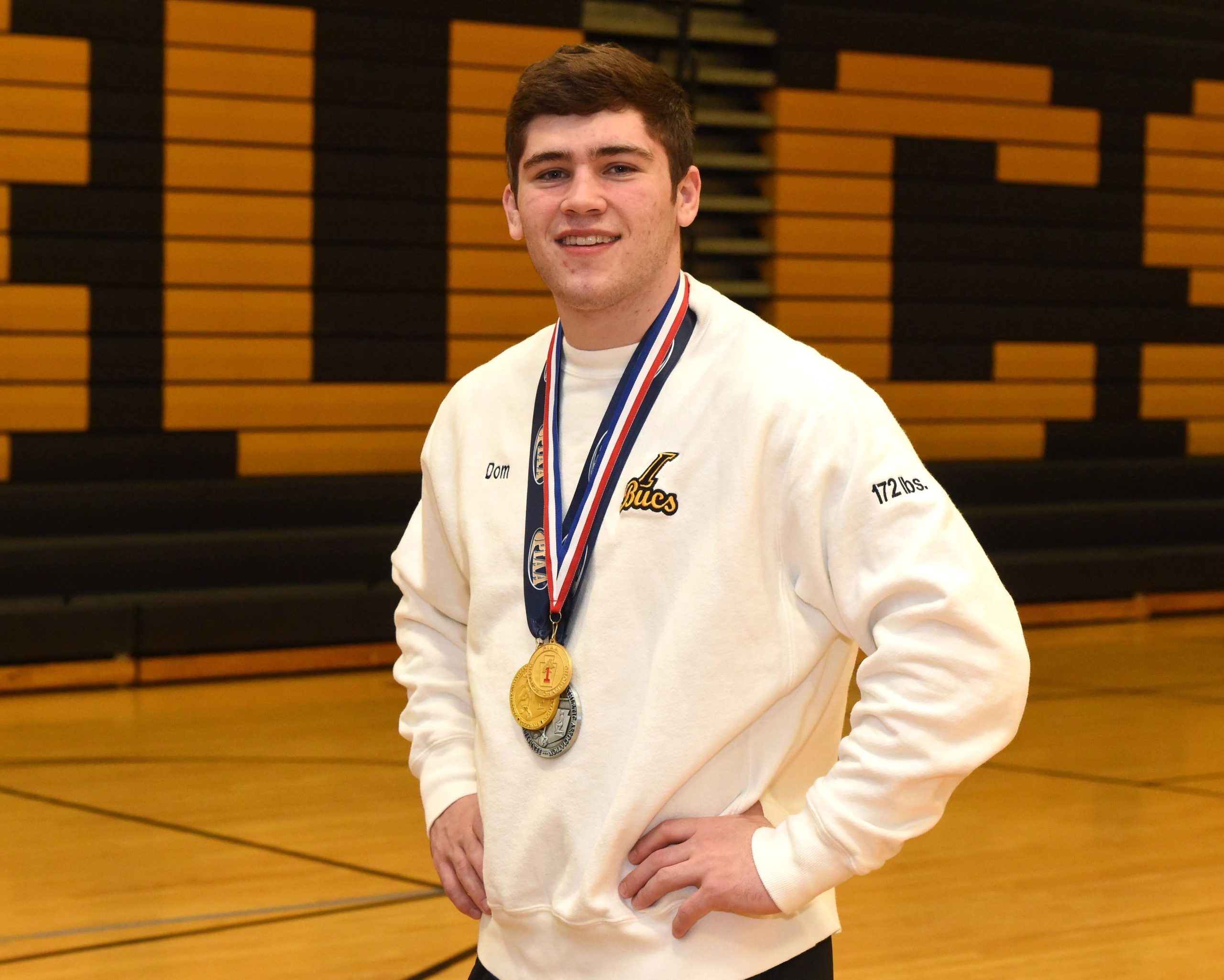 All you need to know about Delaware County Daily Times Wrestler of the Year Dom D’Agostino is he’d give anything, including his medals, to wrestle those last six minutes again after finishing one victory shy of a PIAA Class 3A state championship in Hershey.

It took all the verve of Interboro High coaches Dan Tobin and Ed Hall, D’Agostino’s uncle, to help him realize how amazing and historic his journey had been. No Bucs wrestler had made it to the state finals before. No Interboro wrestler had finished higher than sixth at the PIAA event. No Buc had ever earned two medals like D’Agostino.

D’Agostino’s silver medal at 172 pounds is the highest finish by a Delaware County grappler since three-time Daily Times Wrestler of the Year Hunter Catka won his second state title in 2020.

Interboro’s Dom D’Agostino takes down Clearfield’s Mark McMonigal in a 16-7 win in the 172-pound quarterfinals. (Nate Heckenberger – For MediaNews Group)

The gentle coaching reminders worked. D’Agostino left the Chocolate Capitol of the World remembering their organic celebration on Mat 2 after his 5-4 win over once-beaten Tucker Hogan (Daniel Boone) in the state semis. That memory will be eternally sweet.

“I’m not really one to celebrate wins,” D’Agostino said. “I’m more like someone who kind of expects to win. But that was one of the best moments I’ve ever had. That was one of those wins where it was just like – I know I was doing it for myself – but it was also for my coaches. They’d never been there, either. They never coached in the state finals or the state semifinals. So, it was like an awesome experience. And to celebrate with my uncle … it was like crazy to me. It was just a really nice moment. In my final year we were able to make it all the way to the finals.”

Wrestler of the year is the latest distinction for D’Agostino, a three-time first-team All-Delco selection.

It was a stellar year for Delco wrestlers, as 16 reached the state tournament. Three of them (McFarland at 106,  Barlow at 160 the others, both placing fifth in the state) won medals.

D’Agostino, after an offseason of intense conditioning which included jiu jitsu to improve his ground skills, got a jolt of adrenaline the first day the Bucs got together. They were in the wrestling room, not the cafeteria, the latter a concession to COVID and social distancing the previous season. Though the café was the only option, even the smell of food can distract kids who must be disciplined to make weight.

“I think this year, the first day of practice back up in the room is when I really knew it was going to be a successful season,” D’Agostino said. “I knew me, and my guys were going to be ready.”

D’Agostino is like another son to Tobin, a wrestler himself back in the day. They’ve known each other several years. Tobin also helped coach D’Agostino’s older sister Kylie, who won two straight Del Val League titles in 2015 and 2016 at 106 pounds against boys. And yes, sister and brother competed against each other. Just say Kylie dominated until Dom got strong.

“His mother actually texted me the other day,” Tobin said. “She put up eight years of memories between Kylie, Dominic’s sister, and him. That was nice. I just feel so great for Dom. I think he’s got great things ahead in college at Drexel. I don’t think he’s done yet. Dominic took me for the ride. I was just there.”

D’Agostino is grateful to be continuing his career at Drexel, one of the up-and-coming programs both athletically and academically. The athletes in the program, the stellar education with the co-op work program and the proximity to home in Delco all made him feel it was a great fit.

But D’Agostino will miss Shippey, the 132-pounder going to Virginia Military Institute. They’re best friends. When D’Agostino was beaten, 24-8, in the finals by Rocco Welsh (Waynesburg Central), ranked third in the country, Shippey was there to console him.

“He gave me a big hug,” D’Agostino said. “He said he was proud of me. I learned from (the match). And I’ll keep learning from it. (Welsh) was just more in-your-face physical than me. Now I have kind of something to shoot for, where I need to be to wrestle at the next level. He was really good.”

D’Agostino and Shippey shared a last dinner together in Hershey along with the coaches. A breakfast sandwich, mozzarella sticks, milkshake and gummy lifesavers hit the spot after watching weight all season and weighing in at 9 a.m. on the morning of the finals.

To get ready for the semis, D’Agostino consumed the customary peanut butter and honey bagel.

The drive home Sunday was emotional. Tobin told D’Agostino and Shippey how proud he was of them and the lift they gave the Bucs’ program.

“He just said, ‘thank you, man, thank you for getting me there,’” D’Agostino said. “He’s been with the program for so long and he only had medals two other times – me and Shippey. So, he just kept saying, ‘thank you, I’ve always wanted to be here coaching in the state finals.’”

D’Agostino challenged his Interboro wrestling brothers to build on his finish. He wants a Buc to win it all.

Tobin, who kidded he has maybe five good years of coaching left in him, would love that, although it wouldn’t diminish how he feels about D’Agostino. Even Tobin’s grandson, who resides in the school district, was captivated by D’Agostino’s effort at states.

“My son sent me a picture when we were up at Hershey of them sitting together and watching the matches on FloWrestling,” Tobin said. “He said ‘There’s the next state champ, Dad.’ I thought, wouldn’t that be nice?”

Rest assured that D’Agostino will make time to be there and cheer the next Buc who fights his way into the finals.