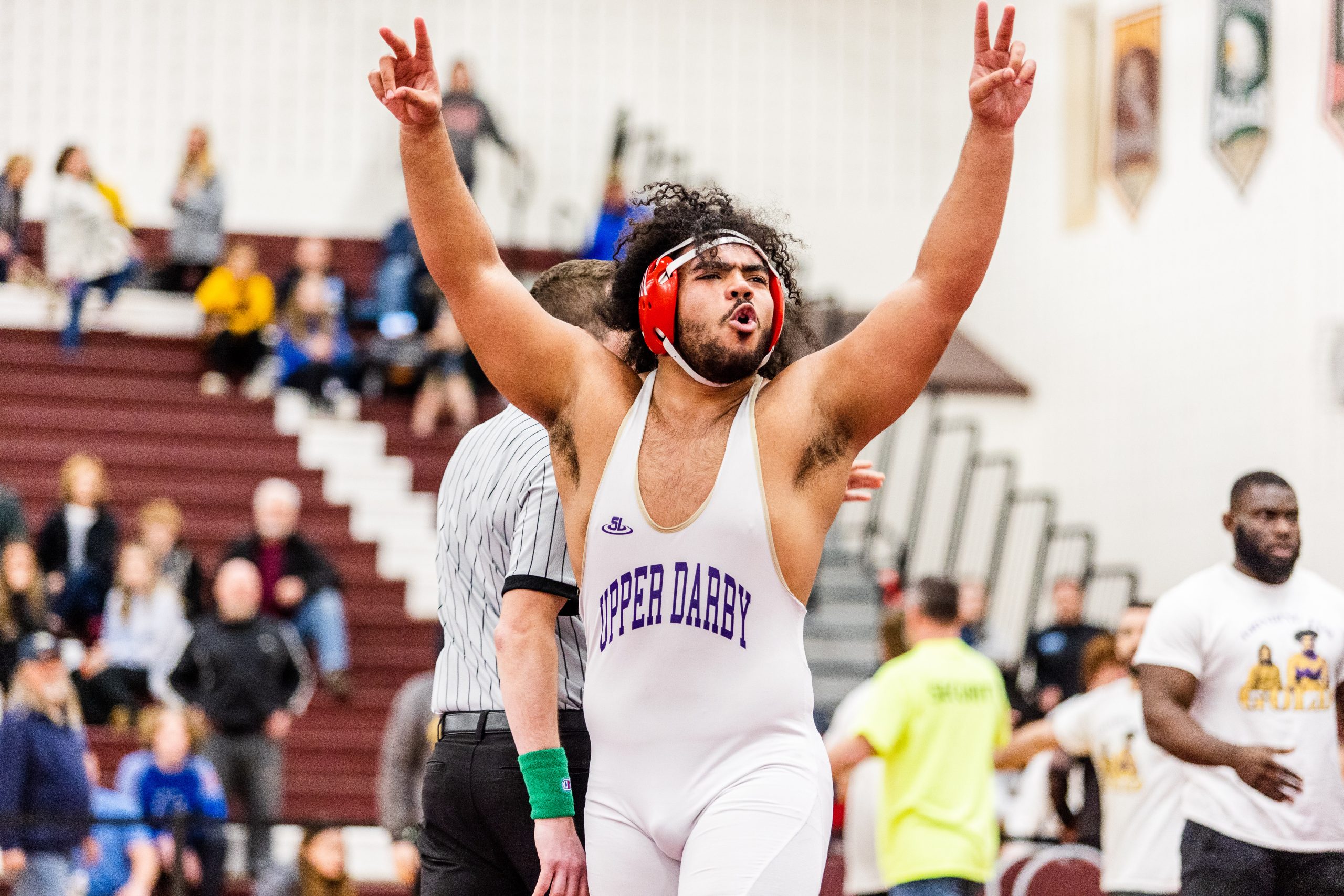 In addition to Wrestler of the Year Dom D’Agostino of Interboro, the All-Delco team includes:

Cole McFarland, Haverford: Just a sophomore, McFarland already is a two-time All-Delco and two-time state qualifier. He made history last year when he became the first freshman in program history to qualify for the PIAA Class 3A Championships. He continues to etch his name in the record book. McFarland went 37-5 overall this season and was a double-digit winner in three weight classes. He went 12-4 at 106, 15-1 at 113 and 10-0 at 120. He became the ninth wrestler in school history, and the first sophomore, to medal at the state meet when he took fifth at 106 pounds in Class 3A. Along the way he won his second straight Central League crown, captured the District 1 South title and finished third at the Southeast Regional.

Haverford’s Cole McFarland scores a reversal against Daniel Boone’s Dean Houser in a 7-0 win in the 106-pound quarterfinals at the PIAA tournament. (Nate Heckenberger – For MediaNews Group)

Shane Holefelder, Sun Valley: A versatile wrestler who competed in three weight classes as a senior for the Vanguards, going 14-6 at 120, 18-0 at 126 and 1-0 at 132 for a 36-6 overall record. He was part of a strong lineup that guided Sun Valley to the Ches-Mont League American Division title. Holefelder earned first-team All-Ches-Mont League honors and finished second at the Ches-Mont League championships, third at the District 1 Class 3A West tournament and fourth at the PIAA Class 3A Southeast Regional to advance to the state tournament.  He finished his career with an 85-32 record.

Matt Ricci, Garnet Valley: Compiled a 37-7 overall record to qualify for the state tournament and earn All-Delco honors for the second time in his career. Spent much of the season at 126 where he went 23-6 and took third at the District 1 Class 3A West tournament and second at the Southeast Regional to earn a trip to Hershey. A three-time Central League individual champion and four-time team champ, Ricci closed out his career with a 102-41 mark, a remarkable feat in the COVID era. A two-sport standout in football as well as wrestling, Ricci will attend the United States Naval Academy.

Nate Shippey, Interboro: Bounced back from a loss in the quarterfinals to finish third at the PIAA Class 3A Regional and earn his second straight trip to the PIAA Championships, one of just four wrestlers in program history to do so.  He finished eighth at 126 pounds at the state championships as a junior. A two-time All-Delco, Shippey captured the District 1 Class 3A South 132-pound title with a pin, win by technical fall and decision. He finished his season with a 26-7 record and closed out his career with a 91-33 mark. He is headed to Virginia Military Institute.

Daniel Kearney, Sun Valley: Part of a strong senior class that powered the Vanguards to the Ches-Mont League American Division title, a berth in the District 1 Class 3A team tournament and a second-place finish at the District 1 Class 3A West tournament. He was a versatile performer for the Vanguards, who went 22-7 at 132, 11-3 at 138 and 2-1 at 145 to compile an overall record of 35-11.  Kearney placed second at the district tournament and fourth at the regional to earn a trip to Hershey for the state tournament.

Daniel Husain, Garnet Valley: Seniors showed the way for Garnet Valley and Husain was part of that strong class that guided the Jaguars to their fifth consecutive Central League title and a third-place finish at both the District 1 Class 3A West and Southeast Regional tournaments. Competed at 138 and 145 pounds where he compiled a 41-7 record. A two-time Central League individual champion, Husain placed second at 138 pounds at the District 1 Class 3A West tournament and third at the Southeast Regional to earn his first trip to the PIAA Championships. Closed out his career with a 92-35 mark and will continue his wrestling career at New York University.

C.J. Wood, Garnet Valley: Like many of his teammates, Wood is a multiple sport athlete. He earned All-Delco honors in football as a senior and also plays baseball for the Jags. He was just as versatile on the wrestling mat. Wood competed at 145, 152 and 160 where he compiled a 34-10 record and qualified for the PIAA Championships for the first time in his career. He won the Central League and District 1 Class 3A West 145-pound crowns, and placed fifth at the Southeast Regional to earn All-Delco honors for the third time. A four-time regional qualifier, Wood closed out his career with a 99-42 mark and will attend Salisbury University where he will play football.

Kelton Brunner, Strath Haven: A key cog in the middle of the lineup for the Panthers who earned All-Delco honors for the second year in a row. Brunner won the District 1 Class 3A South title at 152 pounds to help Strath Haven win the team championship. He then finished fourth at the Southeast Regional to advance to the state tournament. A four-time regional qualifier, Brunner compiled a 33-13 record as a senior to finish his career with a 96-46 mark. He also plays baseball for the Panthers.

Chase Barlow, Strath Haven: Closed out his career as the winningest and most decorated wrestler in program history. Barlow was a four-time All-Delco, Central League and District 1 South champion, a four-time state qualifier and two-time PIAA medal winner. He took fifth at the PIAA championships at 160 pounds as a senior after finishing seventh at 152 at a junior. He went 35-4 this season, including a 10-2 mark in the postseason, and 124-27 in his career with the Panthers, who finished fourth as a team at the Southeast Regional. Barlow earned All-Delco honors in football while helping Strath Haven to the District 1 Class 5A title. Barlow will continue his wrestling career at Bucknell University.

Sam Milligan, Strath Haven: One of just two juniors on the first team, Milligan had to bide his time in his first two years before he finally broke into the regular rotation this season. He more than showed he belonged, winning his first 26 matches, 18 by fall. Milligan finished the season with a 32-3 mark, winning Central League and District 1 South titles at 189 pounds. He bounced back from his first loss of the season to take third at the Southeast Regional championship and earn his first trip to the state meet where he went a respectable 2-2. Also earned All-Delco honors in football where he led the Panthers to the District 1 Class 5A title as the quarterback.

Sam DiTrolio, Garnet Valley: Another versatile athlete who was key to Garnet Valley’s success in football and wrestling. DiTrolio earned All-Delco honors in football as an offensive lineman and filled a big role at 189 and 215 for the Jaguars in wrestling. He was the Central League champ at 215 before dropping down to 189 for the postseason where he won the District 1 Class 3A West title and took third at regionals to earn a trip to Hershey for the PIAA Championships. Picked up the 100th win of his career with a pin of Henderson’s Owen McCarthy in the opening round of the Southeast Regional and closed out his career with a 103-36 record. He will play lacrosse at Division III power Cabrini University.

Julien Laventure, Upper Darby: The latest in a long line of outstanding heavyweights for the Royals. He compiled a record of 82-20 in just three seasons as a varsity wrestler and qualified for the PIAA championships three times. A two-time district and regional champion, Laventure finished sixth at the state meet at 285 as a junior.  He began his senior season with 28 consecutive wins, 16 by fall, and closed out the season with a 37-3 record to earn All-Delco honors for the third time in his career. Also an outstanding football player, he will play football at California University of Pennsylvania..

Bill Brosko, Haverford School: Brosko had a spectacular junior season. He went 26-0 in the regular season and finished the year 34-2. His only losses were the Malvern Prep heavyweight Nicholas Feldman, considered one of the top wrestlers in the country. Brosko, a three-time All-Delco, took second at the Pennsylvania Independent Schools and National Preps tournaments. It was the third straight year he earned All-America honors at National Preps. He has compiled an 80-10 record with the Fords since transferring from Marple Newtown, where he made the state tournament as a freshman. Earned first-team All-Inter-Ac League honors in football.