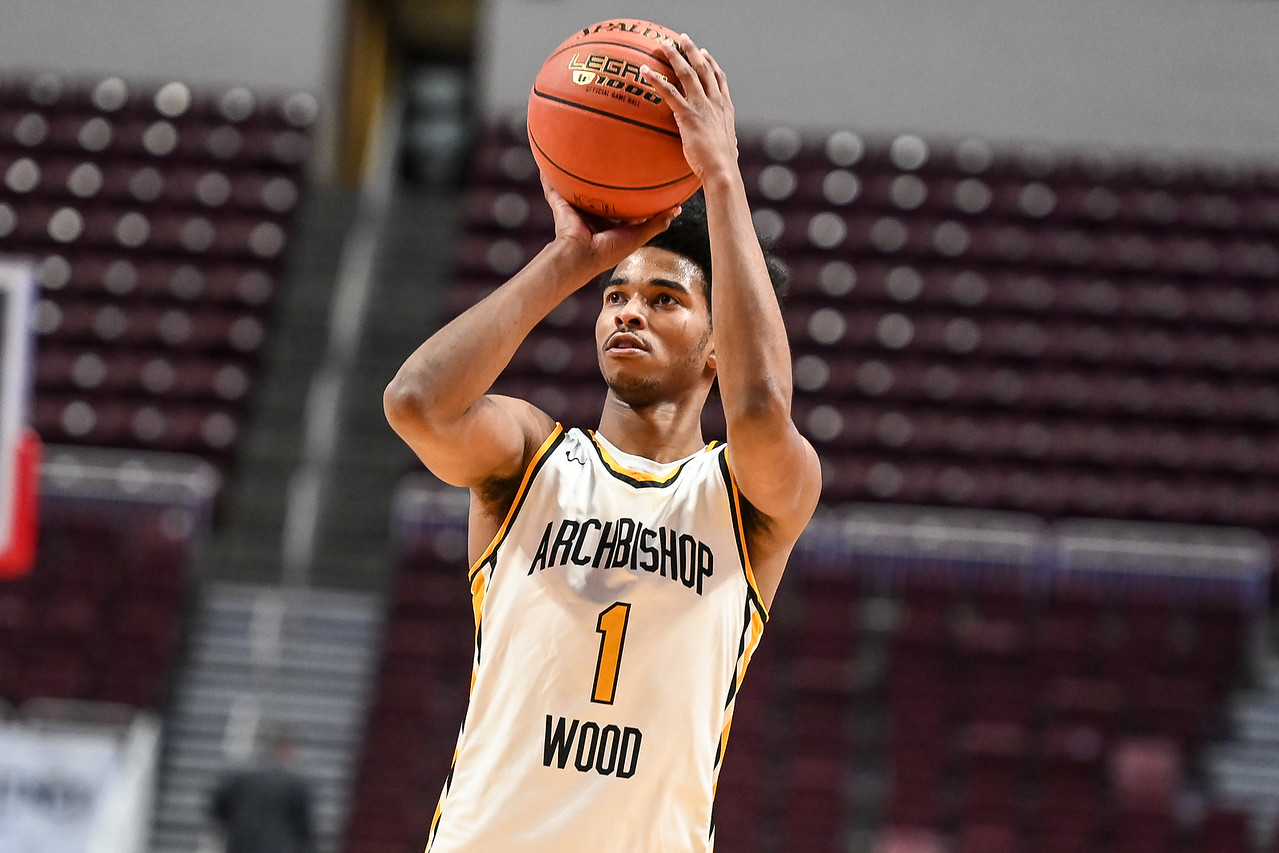 Justin Moore (1) of Archbishop Wood shoots a three against Roman Catholic in the PIAA 6A boys basketball championship at the Giant Center in Hershey, PA on Saturday, March 26, 2022. (Mark Palczewski - For MediaNews Group)

The Archbishop Wood point guard has been one of the top players in the Greater Philadelphia Area for nearly a decade.

Justin Moore continued that legacy this year. After playing his first two years at Cheltenham and junior year at Bishop McDevitt, the 6-foot-3 point guard took his talents to Warminster and averaged 15.2 points, 6.1 assists and 4.4 rebounds per game. The senior led a Vikings team that lost four 1,000-point scorers from last season to the PIAA-6A state championship game last month.

Moore is The Reporter/Times Herald/Montgomery Media 2021-2022 Boys Basketball Player of the Year.

“Me and (Wood) coach (John) Mosco already had a relationship together,” Moore, who finished his career with 1,130 points, said of his decision to go to Wood. “I knew him pretty well. (Former McDevitt coach) Will (Chavis) told me he thought that Wood would be a good fit for me, I’d have the ball in my hands most of the time. Me and coach Mosco knew each other really well and I thought it was the best decision for me.

“Playing after guys like Collin and Rahsool, big-time players that had great careers at Wood, I was just trying to go into Wood and do the best I can and get us to the top again. It was definitely big shoes to fill, but it was a fun season playing in that environment.”

Justin Moore (1) of Archbishop Wood drives to the hoop against Roman Catholic in the PIAA 6A boys basketball championship at the Giant Center in Hershey, PA on Saturday, March 26, 2022.
(Mark Palczewski – For MediaNews Group)

The Cheltenham native immediately made an impact with his new team. Wood opened the season at the Gonzaga DC Classic, where Moore averaged 20 points and five assists as the Vikings went 2-1.

“Throughout the summer and the fall we played together and we bonded right away,” Moore said of getting used to his new teammates. “As soon as we played together, it probably took us about five games and we were rolling. We had shooters around to space the floor and it just made it easier. We were able to click together real well and everybody fit well playing their role.”

Moore, who was a first team All-Philadelphia Catholic League selection this year after earning second team honors as a junior at McDevitt, led the Vikings to a third place finish in the PCL regular season with an 11-2 record, one game behind Roman Catholic and West Catholic at 12-1.

Wood’s biggest wins of the PCL season came against regular-season champ Roman Catholic, 64-61, and postseason champ Neumann-Goretti, 92-78. Moore led the Vikings in both games, scoring 21 points on 8-of-12 shooting against Roman and a 26-point, 11-assist double-double against the Saints. He added six rebounds and four blocks against NG.

Justin Moore of Archbishop Wood dribbles against Roman Catholic in the PIAA 6A boys basketball championship at the Giant Center in Hershey, PA on Saturday, March 26, 2022.
(Mark Palczewski – For MediaNews Group)

The Vikings PCL postseason run ended with a 74-73 loss to Archbishop Ryan in the quarterfinals. Moore played all 32 minutes and scored a game-high 26 points.

“We went on a crazy run to end the third quarter,” Moore said, noting his first PCL playoff game as one of his favorite moments. “The crowd was just going crazy. I hit a three. Mike (Knouse) hit a three. We hit two back-to-back threes and we came back from like 10 points and the crowd just erupted.”

After Wood extended its season with a win over Boys’ Latin, Moore showed how he can run the offense in a variety of ways in the state playoffs.

In wins over Plymouth Whitemarsh and North Hills, teammate Jalil Bethea averaged 30 points per game. Moore played more of a facilitator role and averaged 10 assists in the two victories.

“(Bethea) is probably one of the best shooters I’ve ever played with,” Moore said. “When he’s rolling hot like that, he makes the game a lot easier for me because it takes attention off of me and the defense has to focus on somebody else. When defenses are focused on me, that’s when I can get Jalil involved.”

In a 64-58 win over Reading, which avenged losses in last year’s state final and this regular season, Moore scored a team-high 18 points and grabbed seven rebounds.

After scoring nine points in a hard-fought 56-54 win over Fox Chapel in the state semifinals, Moore ended his high school career with a double-double in the PIAA-6A title game. He scored 21 points and dished out 10 assists in a 77-65 loss against Roman.

Justin Moore (1) of Archbishop Wood shoots a jumper against Khalil Farmer (5) of Roman Catholic in the PIAA 6A boys basketball championship at the Giant Center in Hershey, PA on Saturday, March 26, 2022.
(Mark Palczewski – For MediaNews Group)

Moore will continue his academic and athletic careers at Drexel University in the fall. He committed last September and will play under his Bishop McDevitt coach Will Chavis, who joined Drexel as an assistant coach last summer.

“Coach Will was definitely a part of (choosing Drexel),” Moore, who also had offers from Albany, St. Francis, St. Mary’s, Boston University and other schools, said. “Me and him have the bond that we do, but I enjoyed my visit with those guys. (Drexel) coach (Zach) Spiker and the rest of the coaches on the coaching staff made me feel comfortable and I was already at home, but they made Drexel feel like a home. I had a really good time when I visited up there on campus. I just enjoyed everything. Everything put together, I think it was the best option for me.”

Justin Moore (center) of Archbishop Wood is introducted before the 6A PIAA boys basketball championship at the Giant Center in Hershey, PA on Saturday, March 26, 2022.
(Mark Palczewski – For MediaNews Group)