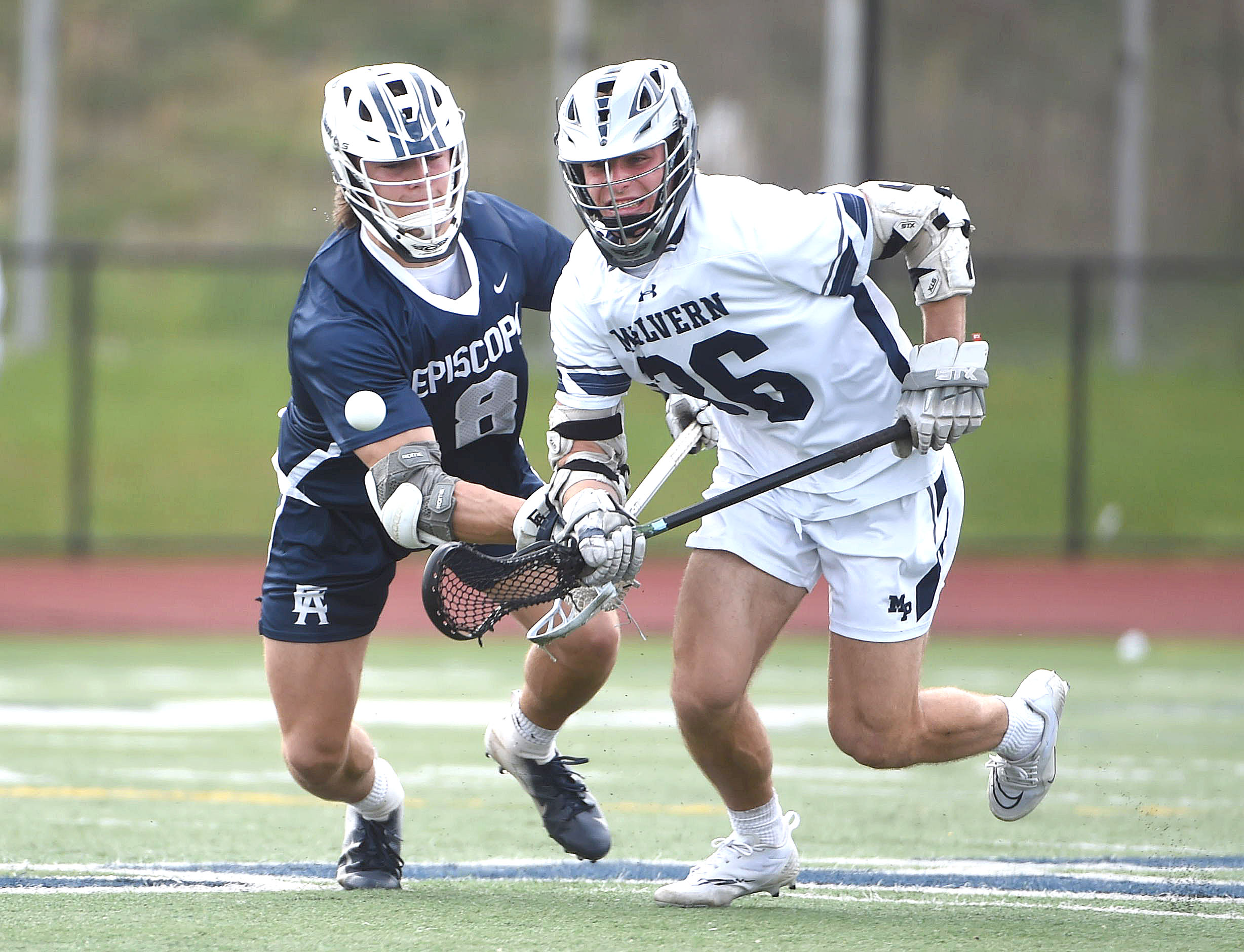 MALVERN >> John McEvoy isn’t very fond of weather delays.
Not that many lacrosse coaches are, but the Malvern Prep mentor acknowledged that it’s one of the more difficult situations a coach can encounter.
“It’s a big-time challenge,” he said. “Our season ends by Memorial Day, but I remember in the old days, we’d have playoffs in June and weather delays happened a lot. You’d have to come back the next day sometimes.”
On Thursday afternoon, his Friars faced a rain/lightning delay of more than an hour, and the lengthy halftime break sure seemed to favor visiting Episcopal Academy in Inter-Ac league action. The Churchmen regrouped and then stormed back early in the second half, but Malvern Prep eventually righted the ship and sailed in with a 16-7 triumph in tow.
“It was definitely different than a normal game,” said Friars’ senior midfielder John Irish. “We let up a little bit, but we came back strong at the end.”
The three-time Inter-Ac champs since 2018, Malvern Prep is now 2-0 in the league (8-2 overall). Episcopal falls to 1-1, 3-3.
“We challenged our guys during the break,” explained Churchmen head coach Chris Bates. “I thought they rose to the occasion and battled.
“It certainly isn’t the result we want, but it’s early in the season and we’d like to see (Malvern Prep) again. They are a good measuring stick and we have to narrow that gap.”
Trailing 11-3 early in the third quarter, Episcopal managed to swing the momentum its way thanks to some impressive work in the faceoff circle by senior Andrew McMeekin. He won five of six and the Churchmen scored three in a row, and four of five, to climb back into contention at 12-7 late in the third quarter.
“We were on our heels early, and (Malvern Prep) does that to you because they are good,” Bates said. “When Andrew started to dominate faceoff possession, you could see it gave us life. There is stuff to build on.”
Sophomore John Majka notched a big goal for the Friars to end the Episcopal scoring run, and then Irish registered the biggest of his four goals in the final 73 seconds of the period after taking a pass from teammate Joe Sheridan.
“They were good goals too – momentum type of goals,” McEvoy pointed out. “(Majka) snuck one inside the pipe – he’s got a big shot.”
It was just enough to turn momentum back Malvern Prep’s way, and the Friars went on to outscore the Churchmen 3-0 in the final period.
“Putting in four to end the game really helped,” said Irish, who lives in Berwyn. “(Episcopal) had a stretch of three straight goals, but then we really shut them out towards the end.”
The Friars never trailed and seized command from the start, scoring twice in the opening 2:19. And then just 41 seconds after Paul Buckley’s goal got Episcopal on the board, Malvern Prep scored again, which was the start of seven consecutive tallies to make it 9-1 midway through the second quarter.
“On offense, we were going through our sets and moving the ball fast,” Irish said. “And a lot of our opportunities came on the back side, where there were a lot of one-on-ones with the goalie.”
A senior, Buckley ended the streak, and Tristan Whitaker cut the margin to 9-3. But with the rain starting to intensify, junior Ryan Falkenstein notched his second goal on the day in the final minute of the opening half, and that’s when play was suspended.
“We got knocked around early on a little bit,” Bates said.
A native of Devon, Majka finished with three goals and junior Alex Nikolic added two goals and two assists. Falkenstein and Liam Timmins each chipped in with two goals and an assist.
“We are still kind of a young team,” McEvoy said. “We only had three or four kids that played a lot last season. It is tough to go through this league and it takes experience and maturity – and they are learning.
“How we started is not where we are now. We’ll figure some more things out as we keep chugging along.”
McMeekin wound up winning 16 of 26 faceoffs for the Churchmen, and goaltender Nash Womack faced 30 shots on goal, and stopped 14 of them. Buckley wound up with three goals and Whitaker two.
“(McMeekin) is good, but our guys took it personal,” McEvoy said. “We tried our best to tie him up and make it a fight.”