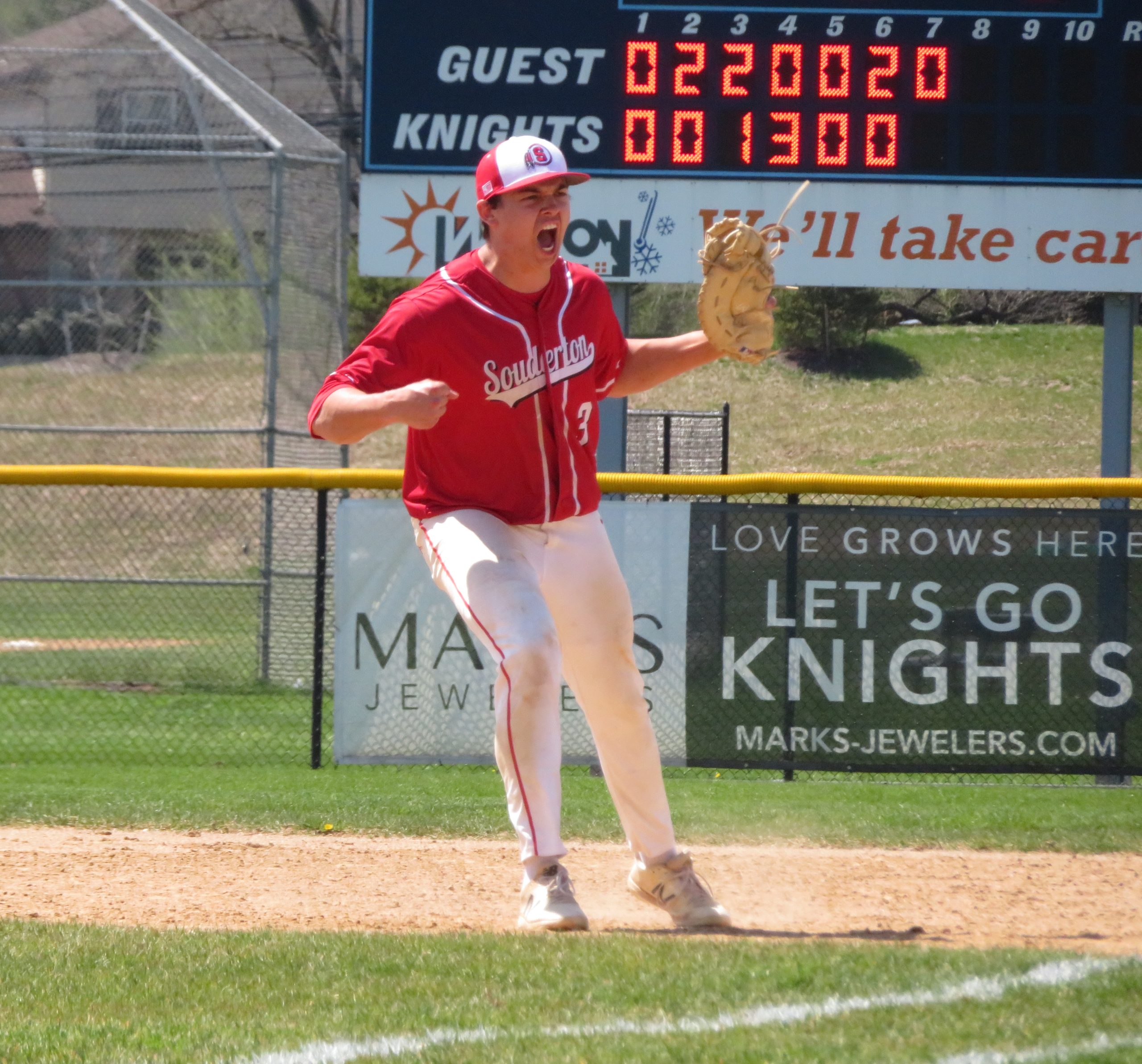 Souderton's Justin DiCesare celebrates after the final out of a win against North Penn. (Ed Morlock/MediaNews Group)

As great as that start was, head coach Mike Childs wanted to see how his team reacted to adversity.

He got his wish when the Indians traveled to rival North Penn. After the Knights rallied back from a four-run deficit to tie the game, Souderton’s Justin DiCesare hit a two-run double in the top of the sixth inning that proved to be the difference in a 6-4 SOL Colonial win Thursday morning.

“We’re a good team,” DiCesare said. “Adversity came and we dealt with it well. That’s definitely the first time we had a close game, dog battle, rival game. We came out on top and that’s a good sign for the future.”

Luke Pollock and Carter Jagiela hit back-to-back one-out singles in the top of the sixth. Pollock advanced to third on a fly ball to right field to put runners on the corners with two outs. Jagiela was running on the pitch when DiCesare crushed his game-winning double into left-center field.

“I was sitting fastball, got the first one and didn’t get it,” DiCesare said. “He came back with another one and I was ready that time. I put it in the left-center gap, put us ahead and got the team going. I think it helped us get the final six outs and finish the game.”

“Justin’s been on fire,” Childs said. “Super confident, seeing the ball well. Monday he had an awesome day, hit a home run there. Hopefully it continues for one more.”

Five of Souderton’s runs came with two outs. In the top of the second inning, Shanley Wall hit a two-out, two-run single with runners on second and third to give the Indians (5-1, 4-0 SOL Colonial) a 2-0 lead.

“Shanley’s always been the rock, especially in the leadoff spot,” Childs said. “He’s a very disciplined hitter. When he gets called like he did his first at-bat, a little outside strike, he rolls with the punches and keeps his composure. He’s a disciplined hitter that knows his strike zone. He comes back, battles back and hits the ball up the middle. That’s what the kid does.”

In the third inning, after DiCesare grounded out with the bases loaded to score a run, Hunter Weitzel hit a two-out single to make it a 4-0 game.

North Penn (3-3, 1-3 SOL Colonial) got one back in the bottom of the third when Ethan Cohen got hit by a pitch with the bases loaded.

In the bottom of the fourth, North Penn’s James Mangine led off with a double. After back-to-back strikeouts, Quinn Marrett worked a walk and Justin Egner was hit by a pitch to load the bases. Jack Picozzi delivered with a three-run double to left field, tying the game, 4-4.

The Knights had chances to tie the game after DiCesare put Souderton ahead 6-4, but they left runners on first and second in the sixth inning and second and third in the seventh. They left the bases loaded earlier in the game in the third inning.

“We’re a big hit away here and there,” Manero said. “It’s got a lot more to do with what we’re doing within the at-bats. We’re letting some good pitches go by here and there. I think maybe our approach at the plate needs to be fixed a little bit. We’ll get back to the drawing board on that and hopefully get ourselves some more hitting counts and be a little more aggressive in key spots.”

“(Wetzel) is only a 10th grader,” Manero said. “He actually was not coming into the program this year as a pitcher. Most of the winter we worked him out as a hitter and a position player, but he started throwing some pens for us in the winter and he looked good. He has some good movement on the ball and he’s really mentally tough out there.

“We had a ninth grader throw for us on Monday and we had a 10th grader come out for us today and they both were just sturdy and focused and they throw strikes.”

Souderton, which went to CB South Thursday afternoon for the second game of a doubleheader, improved to 4-0 in league play with the win over North Penn and dropped the Knights to 1-3.

“To go up 4-0 in the league with one to play in the first half of the actual league play,” Childs said, “it’s a nice feeling. You can’t count (North Penn) out at 1-3 either. They always do their thing, they come back and they battle.”

“We’ve got them at home later in the season,” DiCesare said. “We’ll be ready for them. We just have to take it one game at a time, 4-0 is good, but I want more.”

“Winning the conference is great,” Manero said, “but what you have to do is keep playing better baseball and you have to be playing your best baseball at the end of the year and get into the playoffs. That’s our goal at this point. Championships and standings, none of that matters. It’s just playing a better game every time out there and getting better as the season goes on and playing the best baseball you can in late May – that’s the key. It is a short season, it’s like a football schedule, and you don’t have too much of an opportunity to let yourself get into too big of a hole. We have to keep it close and start stringing some wins together at this point.”