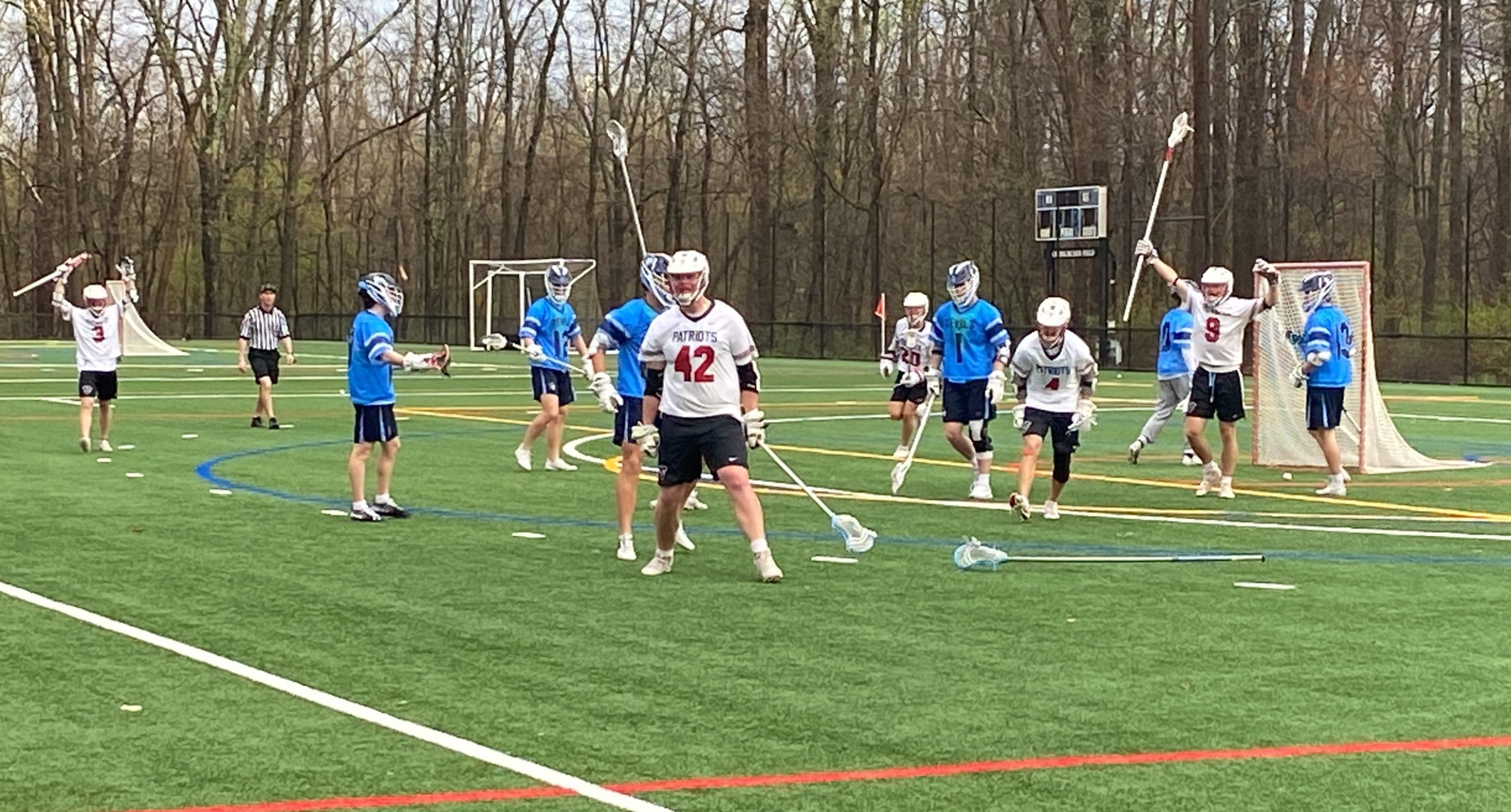 WHITEMARSH >> The Germantown Academy boys lacrosse team waited out a downpour, got hit by a torrent of goals from Springside Chestnut Hill Academy early in the fourth but found a way to dig deep and come away with an Inter-Ac victory Thursday afternoon.

“It was just a gritty game,” GA senior goalkeeper Brendan Donnelly said. “The guys were just out there, scrapping on ground balls, playing very physically and just things swung our way and I think it was because of that grit there.”

The Patriots built a four-goal lead at the end of the third quarter but less than four minutes into the fourth the visiting Blue Devils had pulled even.

Germantown Academy, however, never allowed SCH to pull ahead and with 1:09 remaining junior Josh Gibbs fought through contact to send a low shot into the back of the net. A last-second chance by the Blue Devils went wide and GA held on for a 12-11 victory.

BOYS #LACROSSE: @gapatriotslax’s Josh Gibbs spins off a hit and scores (taking another hit in the process) to put GA up 12-11 with 1:09 left 4Q vs. SCH Academy. GA went on the win by the same score. pic.twitter.com/pzVo0xT07L

“It’s a great feeling,” Gibbs said. “First home Inter-Ac game, set it off on a good tone. Next week we got tough matchups but I think this week will let us go in a good mood.”

Rocco Ippoldo paced Germantown Academy with three goals – two in the third – while Gibbs and Joey Delello each scored twice as the Patriots (7-2, 1-1 league) bounced back from losing their Inter-Ac opener to Episcopal Academy Tuesday.

“(SCH Academy is) really strong when they’re a man up and we took a couple fouls in that fourth quarter which not only gave them their strength but also limited our ability to have a possession, which is kind of a double whammy that helped them take our lead and minimize it,” GA coach Billy McKinney said. “Luckily we were able to grit out some ground balls off the faceoff and hold on to the win.”

In a quality goalie duel with Blue Devils sophomore Hayes Schreiner, Donnelly finished with 17 saves – six of the Drexel commit’s stops coming in the third to help the Patriots cap the period with a 4-1 run and take a 9-5 lead.

“Today’s game was a goalie battle,” McKinney said. “Hayes Schreiner for them was tremendous. He just had 22 saves against Penn Charter and he was in our head for a little bit when we were shooting. But our guys switched things up a little bit and were able to sneak a couple balls barely past him.”

SCH Academy, however, took the momentum at the start of the fourth, scoring four straight goals, knotting things up 9-9 at 8:14 after a Cole Carberry tally.

Long-stick midfielder Declan Connaughton scored off a turnover at 8:02 to put GA back ahead 12 seconds later but Neil Hutchinson’s goal had the contest again even with 7:33 in the fourth. A sprawling save by Donnelly to deny a shot at the left post kept the game tied at 10.

“Sometimes you just got to throw technique out the window and just play,” Donnelly said. “That’s all you can do.”

With GA on a two-man advantage, Jack Luviano passed to Jack Liss in the middle of the defense for a goal at 5:36 for an 11-10 lead.

The Blue Devils netted the equalizer with 1:46 to go as Hutchinson’s shot from outside bounced in.

But Gibbs’ game-winner came just 37 seconds later, the junior dodging in from the right, spinning off one hit then taking another right after letting off his low shot that found its way into the net.

“So for most of the game I’ve been trying to go under low so this one I tried to go top side,” Gibbs said. “And I tried to get to the middle but I saw the guy sliding, so I popped out a little bit, took a hit and then I saw the opening, took the shot. It was stick-side low, placement was good. Little bit luck, but feel like my placement helped it go in.”

The Patriots earned possession collecting a ground ball after the faceoff and ran off clock but SCH Academy had a chance to tie with six seconds left and got off a shot but it went wide of the left post. GA was given the ball after it went out over the end line and a toss into the air sealed the victory.

The game’s start was delayed due a lightning warning and was halted again for the same reason with the Patriots up 3-2 at 8:06 in the second quarter and heavy rains soon followed.

“Chilling, sitting down, stretching out a little bit,” said Donnelly of  what GA did during the pause due to the weather. “We were all in the fieldhouse just chatting up and when we got the word we were going back in, everyone was ecstatic cause we weren’t sure if it was going to happen.

After the storms rolled past, play eventually resumed. GA utilized a hidden-ball trick for a Luviano goal at 3:25 while a Josh Lee strike with 16.3 seconds made it 5-3. Carberry’s goal just before the clock hit zeroes had SCH Academy down two at the break.

A Dundas tally cut the Blue Devils’s deficit to 5-4 at 10:21 in the third but GA scored the next three. Delello put in a low shot as he fell at 8:50 while Ippoldo scored in front off a Luviano assist at 7:31. Delello struck again at 6:17, ripping a shot into the top of the net for an 8-4 lead.

Dundas’ goal at 1:24 snapped the Patriots’ run but Ippoldo bounced in a long-range shot with 15.3 seconds left in the third to have Germantown Academy back up four.

SCH’s Ross Prince scored nine seconds into the fourth after winning a faceoff. Goals from Alec Tulio and Drew Bown had the Blue Devils down just 9-8 at 9:05 with Carberry striking 49 seconds later to put the visitors on level terms.