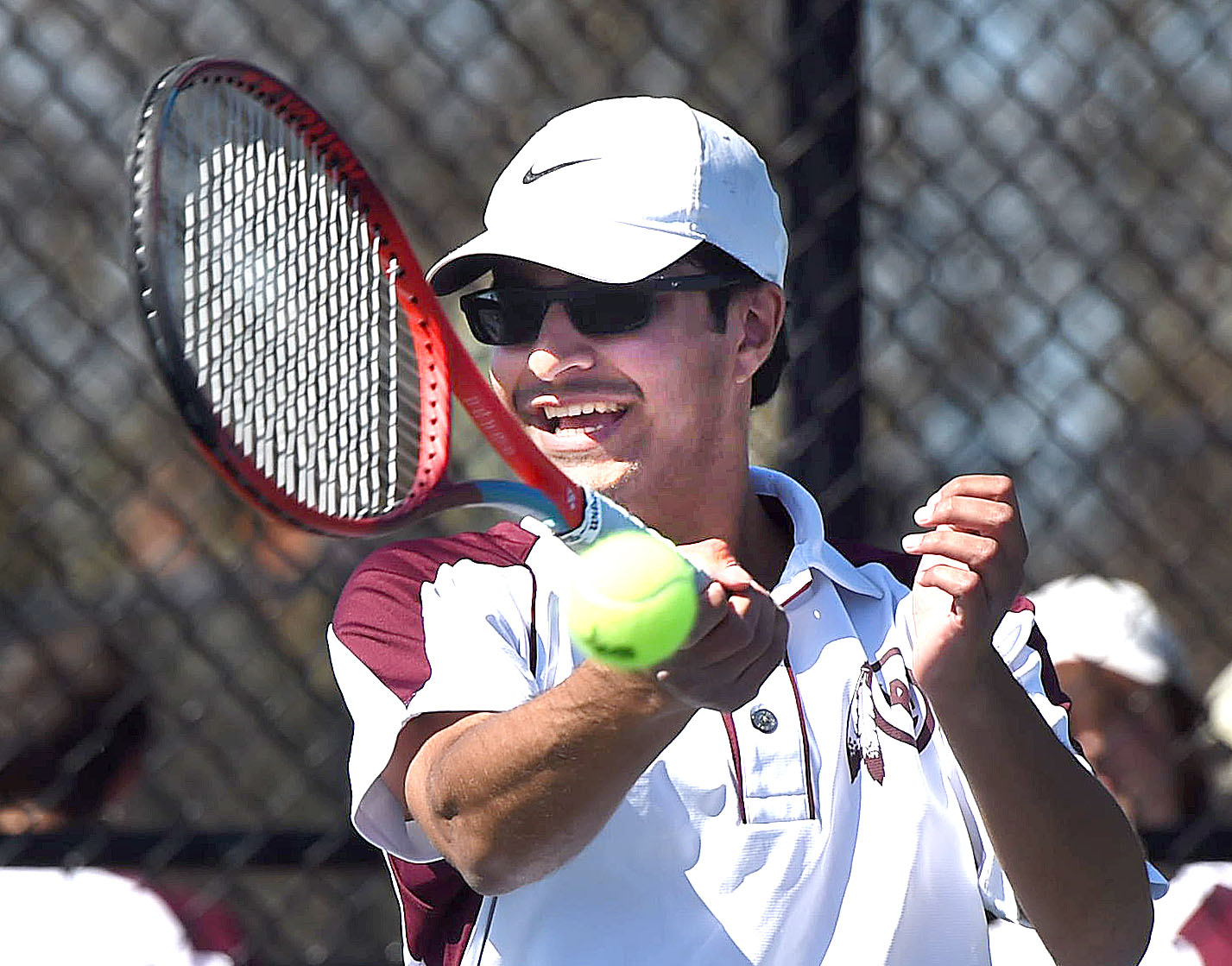 West Chester >> Winning six matches in straight sets, senior-laden West Chester Henderson defeated visiting West Chester Rustin, 6-1, Tuesday.
The Warriors (7-3, with losses to powerful Unionville, Downingtown East and Radnor) feature a total of 21 seniors on the varsity and JV teams combined. In the varsity’s 6-1 win Tuesday, there was at least one Henderson senior involved in each of the six straight-set victories.
Leading the way for West Chester Henderson at singles were seniors Ethan Chheda and Aidan Asmus, who last spring competed as a duo in the PIAA District 1 3A doubles tournament. On Tuesday, Chheda earned a 6-4, 6-2 win at first singles, and Asmus improved his record to 5-3 at second singles with a 7-5, 6-0 victory.

“Ethan’s a good leader, and has a great all-around game – groundstrokes, serve,” said Henderson coach Gary McGeehan, who was substituting for head coach Peter Sok, who is in France and Italy for a class trip April 8-17. “Aidan always figures a way to win – he’s a heady player, with a big game.”
“I was working on becoming more consistent today,” said Chheda.
“We really wanted to win the top five matches today, to get a better [seed] for Districts,” said Ausmus.
For West Chester Rustin (4-4), senior Carter Gilliland picked up the lone Golden Knights win at third singles, winning 6-4, 1-6, 6-4.
“Carter’s really come along as a singles player this year,” noted Rustin head coach Billy McElroy.

West Chester Rustin came into this season with high expectations – last spring the Golden Knights advanced to the District 1 3A team tournament, losing to eventual fourth-place finisher Harriton. But this spring, Rustin has been plagued by a couple of injuries to promising sophomore singles players.
Rustin sophomore Rowan Degnan, who was expected to fill the first singles spot, has been sidelined this season (hammertoe in each foot) and is not expected back until at least the Ches-Mont doubles tourney in early May. Last spring, as a freshman, Degnan teamed with Sam Page to place second in the Ches-Mont American Division doubles tournament, and the pair advanced to the District 1 3A doubles tourney.
Golden Knight sophomore Jack Benedetto, who was expected to play third singles this spring, has been out with a shoulder injury and could be returning after Easter.

“I think that, without those injuries, we would have been the third-best team in the league, behind Unionville and Downingtown East,” said McElroy.
The Rustin coach added, “Sam Page has given us nice leadership at first singles this spring.”
In the first doubles match Tuesday, the Henderson senior duo of Eric Goosen and Andrew Wilcomes breezed to a 6-0, 6-2 victory.
“Eric has a good serve, and Andrew is super steady,” said McGeehan. “Eric and Andrew were our first doubles team last year [on the Warriors’ 8-5 squad], and Eric has played some third singles for us.”

At second doubles, Henderson senior Sid Muvvala and junior Leyton Jarden earned a 6-4, 6-3 win.
“Sid and Leyton have been solid for us at No. 2,” said McGeehan.
The Henderson duo of junior Aansh Devpura and senior Nico Cloarec won their third doubles match, 6-4, 6-0; and the Warriors’ fourth doubles team of senior Kyle Yost and junior Aidan Scheer won, 6-0, 7-5.