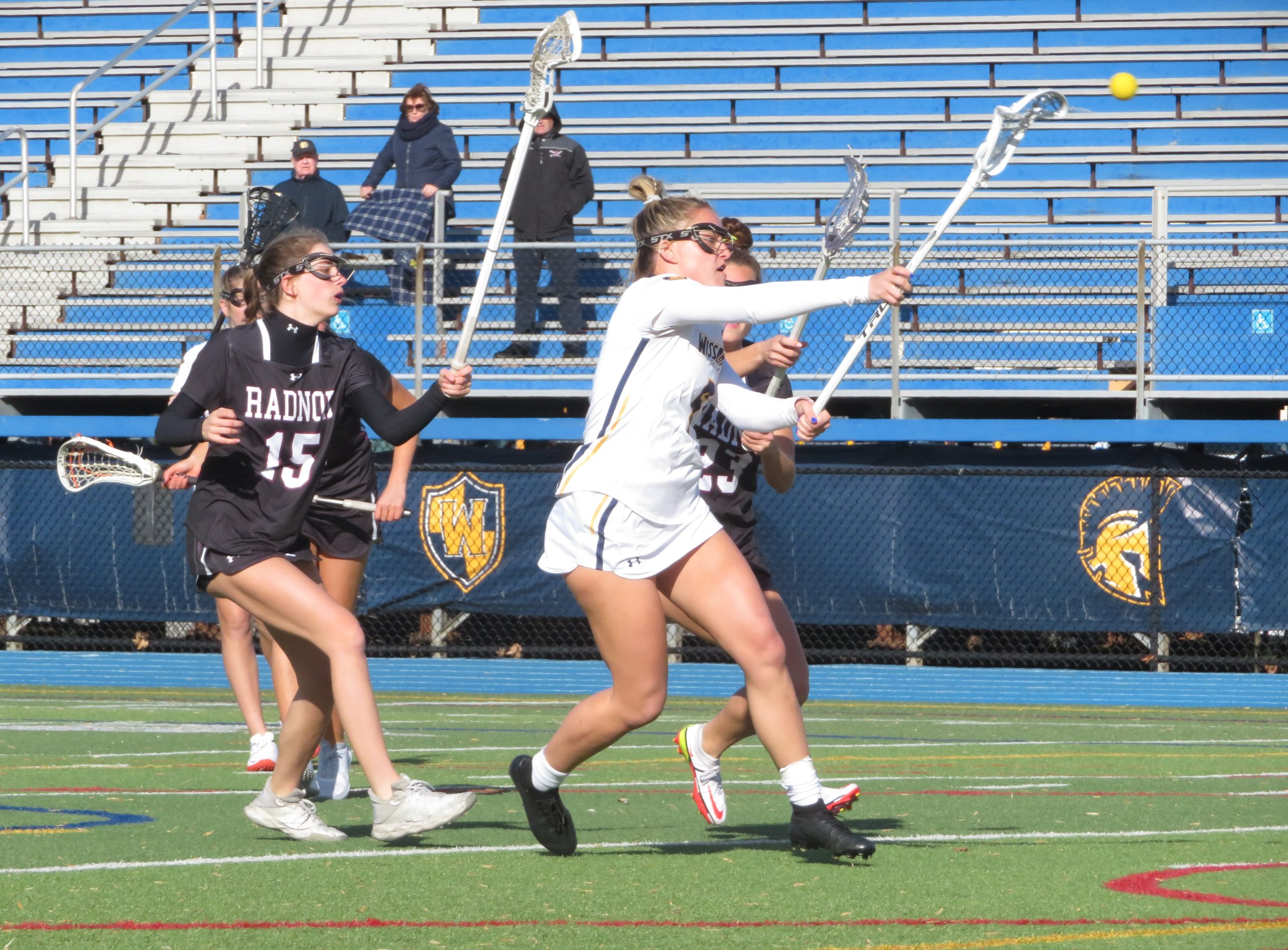 LOWER GWYNEDD >> Despite suffering their first regular season loss in 1,059 days, Wissahickon girls lacrosse players walked off the the field with their heads held high.

The Trojans went toe-to-toe with defending PIAA-3A state champion Radnor for 50 minutes Friday evening. When the final horn sounded, Emma Baker was denied her ninth goal of the game and the Raptors celebrated a 9-8 win at Wissahickon High School.

“We really wanted to come out and bring the energy,” Baker said. “I think that’s what we did – we were up 5-2 and we were all really excited. To lose by one to the defending state champs, I’m just really impressed with my team.

“I really think we can hold our own with anyone in District 1. I’m very excited to see how far we go because I have faith in my team.”

Baker scored all eight goals for Wissahickon (3-1). She scored five in the first half and three in the second.

“We moved the ball very well and we were able to have possession well which is very important,” Baker, who was one goal shy of her career-high set against Central Bucks West last year, credited for her big game. “We moved it and we were seeing the open people. When I would see the lane I would just drive and it was working.”

Baker’s eighth goal made it a 9-8 game with 7:57 remaining. After Radnor held possession for most of the final eight minutes, Baker had a chance to tie the game in the final moments. She got the ball with less than four seconds remaining and headed to the goal. Radnor goalie Arden Jansen was able to make the save, her fifth of the game and first of the second half, to secure the win.

“The time was stressing me out,” Baker said, “but I tried to take it. I felt like I was too far out.”

“That was amazing,” Radnor’s Sarah Kelley said of Jansen’s save. “That changed the whole game.”

After Baker made it 9-8 with just under eight minutes to go, Radnor won the draw and successfully played keep away for 5:33. The Raptors (2-2) earned two free-positions during the time-draining stretch and didn’t give up the ball until there was 2:24 left in the game.

“We definitely practice how to play when we’re a man-up, man-down in practice,” Kelley said. “We just wanted to keep possession and be strong with the ball. That’s what we did. We just had to execute.”

The Raptors got the ball back 64 seconds later, but gave it back to Wissahickon with 53 seconds remaining.

Radnor took control of the game with four straight goals over a 4:41 stretch.

Trailing 5-2 in the final minute of the first half, the Raptors defense forced a turnover. Kelley earned a free position shot with 8.8 seconds before intermission and scored to make it a 5-3 game.

“We definitely needed to push it more, but also be smarter,” Kelley said. “That was one of our difficulties in the first half. Just getting that goal at the end of the first half was really important and it set the tone.”

After halftime, Amelia Reinholt sandwiched a goal and an assist around a Kelley goal to give Radnor a 6-5 advantage.

Baker scored back-to-back goals to put Wiss ahead, 7-6, but Radnor responded with three straight for a 9-7 lead. Taylor Murphy scored what proved to be the game-winner, which was set up by Kelley forcing a turnover, with 9:55 left.