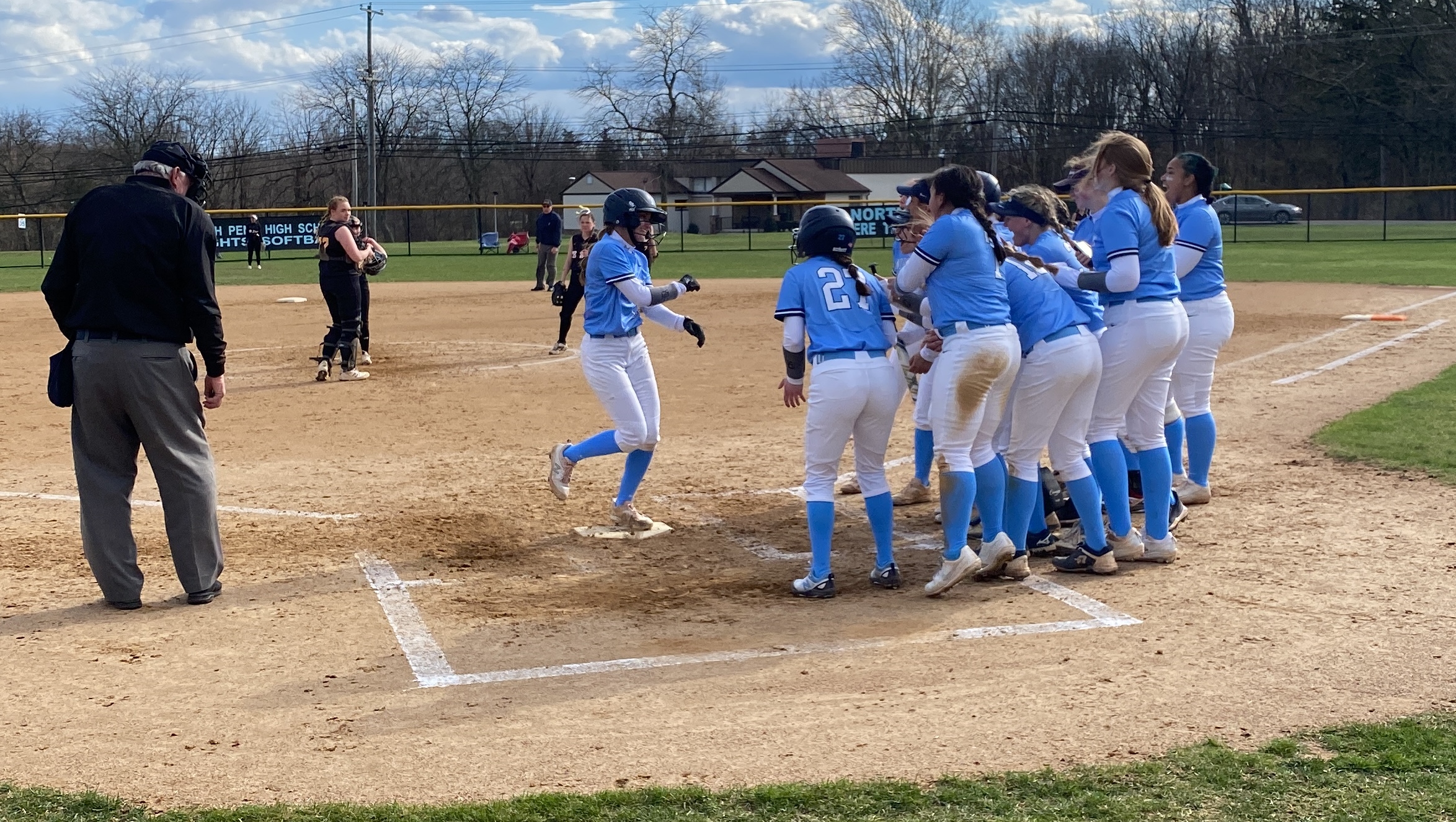 TOWAMENCIN >> Julia Shearer is not putting too much pressure on herself as she takes over North Penn softball’s pitching duties from state Player of the Year Mady Volpe.

“Obviously I have some pretty big shoes to fill so coming in this year I was just trying to be myself,” Shearer said. “I’m my own type of pitcher and I guess other teams that don’t know what to expect with me yet so I’m using that to my advantage and coming in with this new role, I’m just trying to see what happens and do my job.”

Volpe, after helping the Knights claim last season’s PIAA-6A title, is now throwing for Coastal Carolina but on a cold and windy Friday afternoon Shearer showed North Penn still has a stellar arm in the circle.

Shearer struck out 14 in pitching a one-hit shutout while at the plate the junior Maryland commit went 2-for-4 with four RBIs – collecting the last two on a home run in the bottom of the third inning – as host North Penn rolled past visiting Central Bucks West 10-0 in five innings in their SOL Colonial Division contest.

#SOFTBALL: @NPsoftball’s @juliashearer_ blasts a two-run home run to center for a 10-0 lead B3 vs. CB West. pic.twitter.com/uxkUeIb2tK

“I’m trying to take over the same role Mady played last year,” said Shearer, who was a first-team all-state outfielder as a sophomore in 2021. “I’m in the circle. I have to lead the infield. Offensively, I’m just trying to get everyone hyped up and get everyone ready for the game but I feel like it’s a pretty big role to play and I’m trying my best to make it work for our team.”

Sarah Sabocsik connected on a solo home run in the bottom of the first before North Penn (4-0, 2-0 division) plated three runs in the second. The Knights tacked on their final six runs in the third.

North Penn has recorded double digits runs in all of its games so far in 2022 and after Friday’s victory has outscored opponents 44-0.

The Knights started the season down in Myrtle Beach, South Carolina with victories over South Allegheny (11-0) and Avonworth (13-0) then in their home opener Wednesday topped Council Rock South 10-0 in an SOL crossover.

“The kids are focused,” NP coach Rick Torresani said. “And down there they were focused, I mean we faced some good pitching down there and they hit the ball. Up here, they’re focused.

“And a lot of times when you go against somebody maybe that’s not really fast you lose focus and then you try to hit a home run and all that but these kids have just stayed within themselves and they’re hitting the ball one through nine and one though six is just killing the ball.”

Shearer, meanwhile, began Friday by striking out the side in the top of the first. After allowing Abby Lineman’s single to left center to lead off the second, Shearer struck out the next five.

“I was dominating with my curveball,” Shearer said. “I threw my changeup in there a little bit but working both sides of the plate was crucial because they kind of where adjusting to what I was throwing throughout the game but hitting my spots and mixing it up was key.”

In the fourth after giving up a two-out walk to put two runners on, the junior lefty got a strikeout swinging then proceeded to strike out the Bucks in order in the top of the fifth to seal the run-rule win.

“I’m a primary outfielder so pitching all these innings is pretty new to me but I’m working,” Shearer said. “I’m getting my arm stronger for it and I’m doing whatever I can for the team.”

Sabocsik, who is North Penn’s catcher, said the transition to Shearer from Volpe has been pretty smooth, mostly due to the rapport Sabocsik and Shearer already have built playing together in travel ball.

“It’s not much different honestly, about the same speed, same everything,” Sabocsik said. “I’ve been catching Julia since I was 10 so I’m used to her ball movement and stuff so wasn’t that much of a change.”

#SOFTBALL: @NPsoftball’s @BellaNunn15 with an RBI single down the first base line, scoring Casey Sokol for an 8-0 lead B3 vs. CB West. pic.twitter.com/oi3n4TL86W

“People keep saying ‘You’re going to defend, you’re going to defend,’ and I told them we don’t have to defend anything,” Torresani said. “We won it. It’s a new season, let’s go out there and win a state championship or at least that’s one of our goals anyway – win our conference. And there’s no defending, we already got it. We just got to go out and now get a new one this year if we want to.”

Sabocsik collected the Knights’ first hit, putting the home side up 1-0 as she knocked a one-out home run over the center-field fence in the bottom of the first.

“I just tried finding my pitch and happily it was right down the middle,” she said. “So I just took my swing and just, it went.”

Gianna Cimino started the bottom of the second with a double to left. An error on Sophia Collins’ fly ball to left center put runners on second and third with no outs. Cimino scored to make it 2-0 as Maddy Gronback bunted and reached first on a fielder’s choice.

Three batters later, Shearer doubled the advantage to 4-0 with a two-out, two-RBI single through the right side.

“At the beginning of the year I didn’t really know what to expect,” Shearer said. “Starting our season the way we did at Myrtle it honestly blew me away how much we were knit as a team and the fact that we’re so close it makes it so much easier, just go out there and play the game, have fun with it.

“And I think that really adds to the atmosphere and just makes it fun to play and we can just relax and be ourselves.”

#SOFTBALL: @NPsoftball’s Gianna Cimino gets a hand in to score on Maddy Gronback’s bunt for a 2-0 lead B2 vs CB West. pic.twitter.com/mXD3wvO6ew

With one out in the third, Brie Wilmot doubled to right center, went to third as Cimino reached on an error then scored on a Collins RBI single through the left side.

An error on Casey Sokol’s fly ball to right scored both Cimino and Collins and put Sokol on third. Bella Nunn followed with an RBI single down the first-base line for an 8-0 lead.

The next at-bat, Shearer laced a two-run home run to left center to put the Knights up 10.

“She threw my inside and hitting off a lefty as a left-handed batter that’s what I was looking for,” Shearer said. “And as soon as I saw that I just swung as hard as I can and I knew it was gone off the bat.”