Plymouth Whitemarsh gets glimpse of future with walkoff win over Souderton 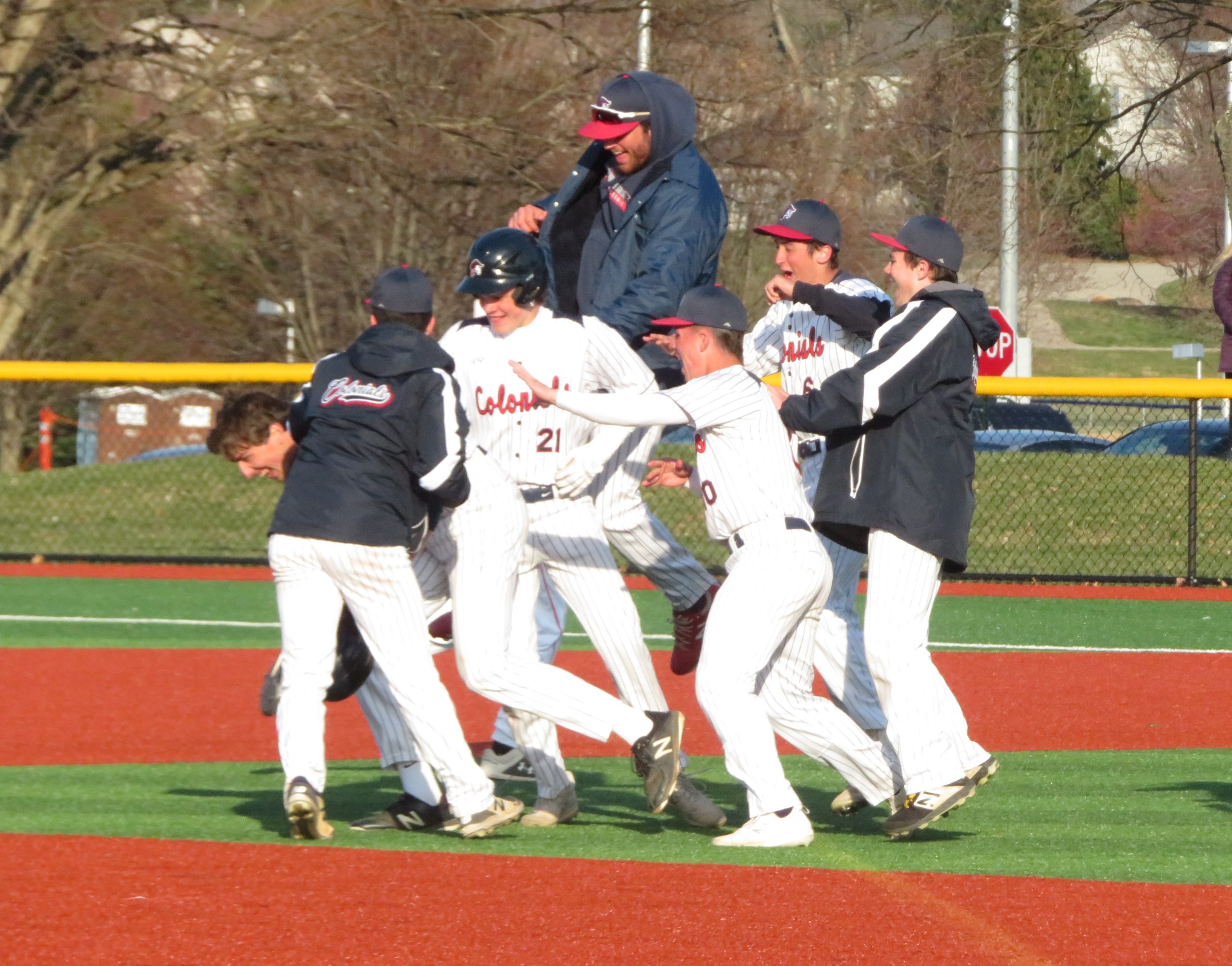 WHITEMARSH >> Due to a scheduling conflict with Plymouth Whitemarsh’s senior trip, the baseball team had no choice but to play Wednesday’s game against Souderton without most of its 12th graders.

The underclassmen took advantage of the opportunity and extended playing time and delivered a non-league 3-2 extra-inning win over the Indians at Plymouth Whitemarsh High School.

“We’re missing four or five of our starters,” Colonials junior designated hitter Lincoln Sharpe said. “It’s kind of the future of our team. We weren’t thinking much of it. We were just trying to come out and play our best. It’s really great to get the win.”

Sharpe started the game 0-for-3 with three strikeouts, but came through when it mattered most. In the bottom of the eighth inning he stepped to the plate with runners on first and second and one out and ripped a single into left field, scoring Chase Olszyk for the walkoff win.

“My coach comes up to me and he says, ‘Wipe those away – new at-bat,'” Sharpe said of an interaction with Manero before his final trip to the plate. “I walk up, nothing in my head. Just trying to get that hit up the middle. It worked out in the end, just hunted that fastball.”

“I saw him go over and get some work off the tee,” Manero said. “He clearly reset his mind. We know he’s capable of big hits for us and he hits the ball hard every time he makes contact. He roped that one. It was a good time to make up for the other at-bats.”

Olszyk got the rally started when he was hit by a pitch with one out. Tyler Gartland followed by reaching on an error to set the table for Sharpe’s game-winner.

Plymouth Whitemarsh (3-0) was in position to win thanks to strong pitching from Ray Tomassetti and Matt Krawitz. Tomassetti, the Colonials only senior to play Wednesday, started and went six innings. He struck out four batters to three walks and allowed two unearned runs on two hits. Krawitz earned the win with two no-hit innings. He recorded six straight outs after hitting the first batter he faced.

“Ray is really in a zone right now,” Manero said. “He’s really focused. We expect for him to play a big role for us.

“We couldn’t get (Krawitz) into the games in Florida because our starters were too effective. He’s just chomping at the bit to get on that mound. He’s a guy that could be a starter for us as well as a reliever week-to-week depending on what we need.”

“Jackson Morrisette did very well on the mound,” Souderton coach Mike Childs said. “Our next two guys were sophomores and we’re still trying to see what they can do for us. Jeremy got himself into some jams but also got himself out of jams. It’s good to see that out of him.”

The Indians took a 1-0 lead in the top of the fourth inning. Luke Pollock worked a one-out walk and advanced to third when a pickoff attempt went wide and up the first-base line. He scored on a Carter Jagiela sacrifice fly to left field.

PW immediately responded in the bottom half of the inning. Luke Caucci hit a leadoff triple and scored on a Colin Brady single. Luke Gartland worked a walk and Olszyk loaded the bases when Souderton couldn’t get the lead runner on his sacrifice bunt. After a pair of strikeouts, Gavin Rocks worked a walk to score Brady and put the Colonials ahead, 2-1.

Souderton made it 2-2 in the top of the sixth. Pollock worked a one-out walk and scored when Ethan Warner’s sinking line drive was dropped in center field.

“It’s just a normal non-league thing,” Childs said. “Starters get four or five innings and see what they can do and get them primed for our first league game on Friday against CB South. It’s nice to get the other guys opportunities. We did learn some stuff today – who can do what, especially on the mound with our young guys.”