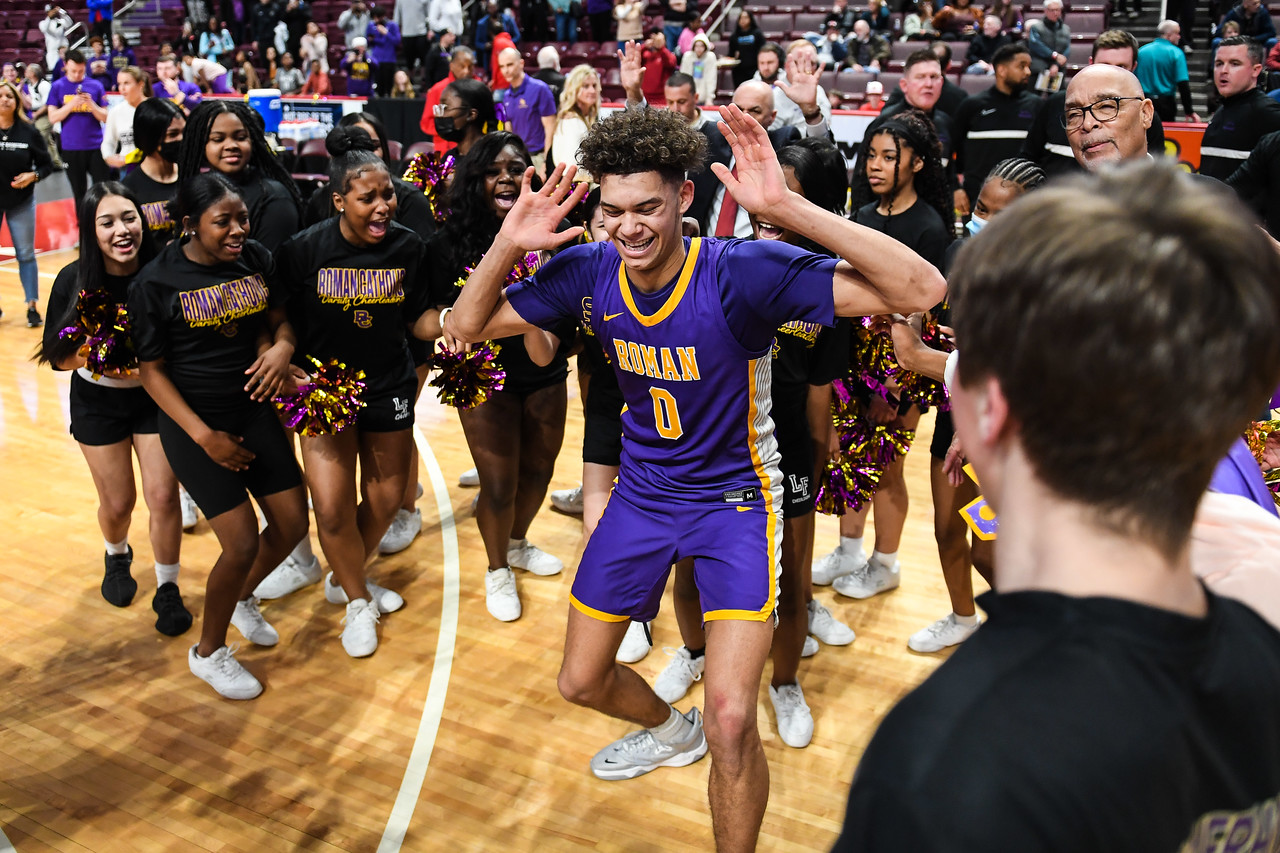 HERSHEY >> Daniel Skillings had his choice of college suitors for a reason.

The rangy Roman Catholic senior ultimately chose Cincinatti, giving Bearcats fans a 6-foot-6 prospect to bolster their odds moving into the Big 12. Before that however, Skillings and his Cahillities teammates wanted to go out with a title after falling short of their quest to capture a PCL championship last month.

The senior made it happen, taking off in a dominant second half as Roman avenged a regular season loss to Archbishop Wood with a 77-65 win over the Vikings to capture the PIAA 6A title Saturday night in Hershey.

Roman Catholic celebrates after winning the PIAA 6A boys basketball championship at the Giant Center in Hershey, PA on Saturday, March 26, 2022.
(Mark Palczewski – For MediaNews Group)

Skillings hit his last nine shots, many of an extremely difficult degree and finished with 31 points, 12 rebounds and three assists. Roman, which won its fourth state title but just its first since 2018, was in a back-and-forth battle with the Vikings for two-and-a-half quarters until Skillings turned things up as part of an 11-0 run to end the third quarter and flip the script.

In the regular season, Wood scratched out a narrow win over Roman and with the PCL powers colliding back in Hershey – the first PCL-vs-PCL title tilt since 2015 – it seemed like another battle was in store.

Once Skillings got going, the Vikings just couldn’t seem to stop him although it was certainly not for a lack of effort.

“They’re a good team, they’re a very good team. We never got in a rhythm defensively and a couple guys ended up getting in foul trouble so we had a few bad matchups and Skillings, when you put up 12 rebounds and 31 points, it’s hard to match,” Wood coach John Mosco said. “It got harder and harder to stop him. We weren’t where we were supposed to be a couple times in help but he’s quick, he’s got that spin move. You’re not going to play in the Big 12 without being any good.”

Saturday was a return to the summit for Roman, but also a return of sorts for the Vikings. After graduating all five starters from last year’s finalist squad, four of them to Division I programs, a new group of players banded together and battled their way back to Hershey.

It wasn’t the ending they wanted but seniors Tyson Allen and Justin Moore, who led the team alongside fellow senior co-captain Mike Knouse, had plenty to be proud of.

“It hurts pretty bad, it stinks with us being seniors and this being our last game, it hit me a little bit at the end and will probably hit me tomorrow even harder,” Moore, who led Wood with 21, said. “It’s been a great ride, a great four years and a great experience at all three of my schools so to finish it out here, it’s been an amazing year.

“I appreciate Coach Mosco for taking me in, taking care of me and putting me in a great situation to compete for a state championship and PCL championship but also for putting me around a bunch of great players.”

Justin Moore (1) of Archbishop Wood drives to the hoop against Roman Catholic in the PIAA 6A boys basketball championship at the Giant Center in Hershey, PA on Saturday, March 26, 2022.
(Mark Palczewski – For MediaNews Group)

Allen, who spent all four years in the program and excelled in his first year as a starter, added he wants to see his team right back in Hershey next year and hoped the numerous underclassmen coming back use the loss as motivation, much like his class did with the questions around them preseason.

“I couldn’t be more proud of all the young guys,” Allen, who scored 10 points, said. “I don’t think anyone really thought we’d be here this year, I don’t know if anyone thought we’d be anywhere but we had faith in ourselves, we knew we were going to be good this year and we just kept going out and playing.”

One of those young guys is sophomore Jalil Bethea, who gave Wood an early spark with 10 of his 15 coming in the first half. Along with Bahsil Laster, Carson Howard, Josh Reed and several others, there’s a solid foundation in place for Wood.

The Vikings were in Hershey for the fourth time since 2017 and among the first to leave the team’s locker room on Saturday were a few prominent recent alumni still vested in Wood’s success, a group Allen and Moore now counted themselves as part of.

“What I just told them, nine years ago we took over at Wood and we’ve been here four times and won two Catholic League championships and the biggest thing to me was, in the locker room, Rahsool Diggins came back, Daeshon Shepherd came back, all through the kids coming back builds a program and now I feel like we have a program here,” Mosco said. “We didn’t get our goals of where we thought we’d be with the Palestra winning a championship and here. Our saying all year was ‘these four walls’ because nobody believed in us.”

Jalil Bethea (10) of Archbishop Wood dunks against Roman Catholic in the PIAA 6A boys basketball championship at the Giant Center in Hershey, PA on Saturday, March 26, 2022.
(Mark Palczewski – For MediaNews Group)

Skillings was spectacular but also not alone. Xzayvier Brown had 16 for Roman, Khalil Farmer had 12 and Shareef Jackson was a huge lift off the bench with nine points and 11 rebounds.

Farmer hit one of the biggest shots of the game, a 3-pointer on the left wing after Skillings made an acrobatic play to save a loose ball in off a miss, with the make really jump-starting Roman’s 11-0 run. For his part, Skillings would accumulate seven points in the run and the senior felt in the first meeting, he and his teammates hadn’t quite gotten their chemistry right.

That wasn’t a problem after halftime on Saturday and it makes getting even with Wood feel that much better.

“It makes it a lot more special because you know you’re going to get a good game, you know you’re going to get a fight. Other teams, down from North or West, East, wherever they’re from, a lot of teams hold balls, they don’t know where they’re from and how they play,” Skillings said. “And everyone knows that came out to this game, everybody knows who Wood is and everybody knows who Roman Catholic is, they knew it was going to be a good game, and it was good to get our get-back.”

Roman Catholic poses for a photo after winning the PIAA 6A boys basketball championship at the Giant Center in Hershey, PA on Saturday, March 26, 2022.
(Mark Palczewski – For MediaNews Group)

Plymouth Whitemarsh gets its perfect ending with state championship win over Mt. Lebanon
Next Dynasty Up? WC East Goes Back-To-Back