Plymouth Whitemarsh gets its perfect ending with state championship win over Mt. Lebanon 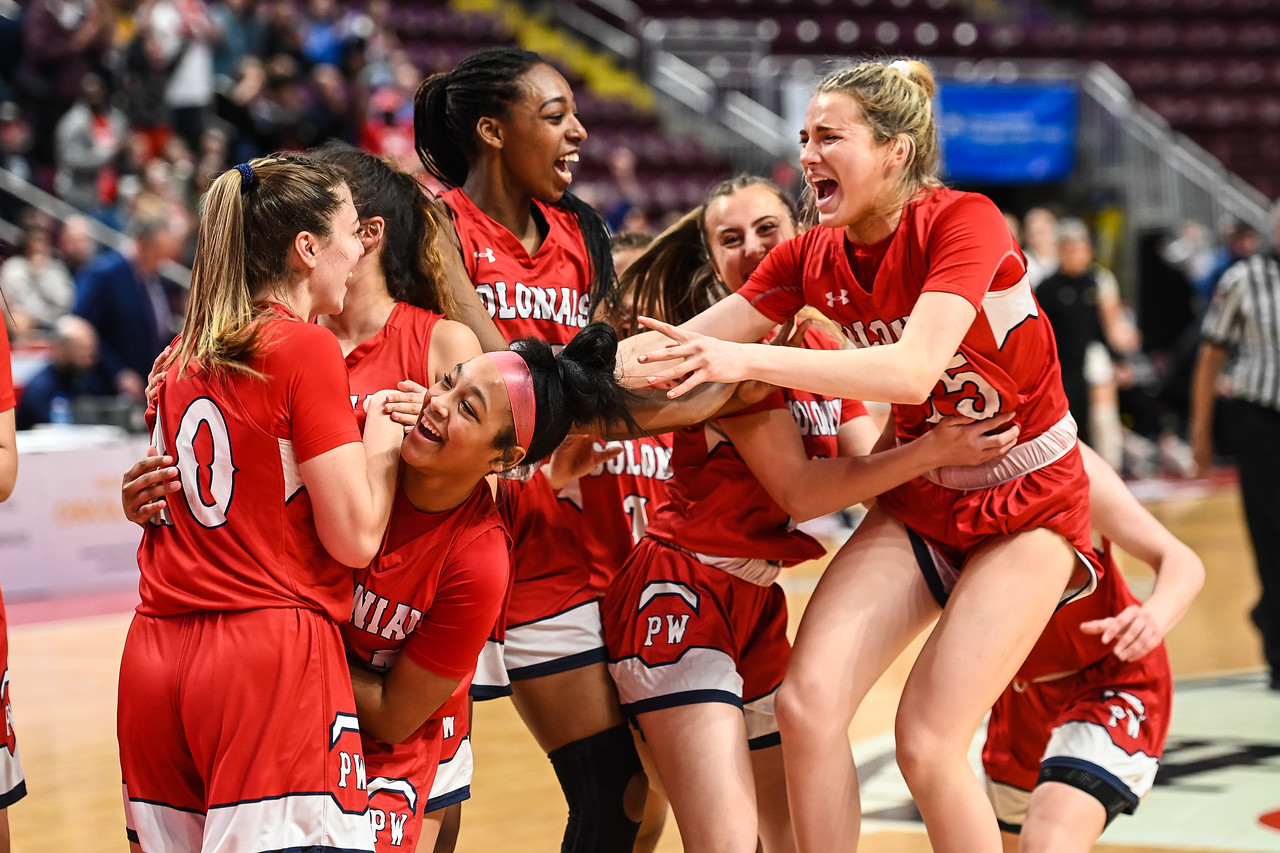 Win or lose, the Plymouth Whitemarsh girls’ basketball team had accomplished more than any other team in program history and had authored a season to remember. But these Colonials didn’t come to Hershey to go home unhappy.

PW dominated from start to finish, putting the cap on a 34-0 season with a complete 60-40 win over Mt. Lebanon in the PIAA Class 6A title game Saturday at the Giant Center.

“It’s like, honestly, the best game I’ve ever been a part of,” Colonials maestro point guard Kaitlyn Flanagan said. “This has been the goal, not even since I’ve been in high school, winning a state championship is something where if you’re an athlete, every kid dreams about for a really long time.

“To do it like this, with this group, it’s hard to put into words. It’s such an amazing feeling that I don’t think it’s fully hit half of us yet.”

Kaitlyn Flanagan (5), Erin Daley (15), and Abigail Sharpe (20) of Plymouth-Whitemarsh celebrate after defeating Mount Lebanon in the PIAA 6A girls basketball championship at the Giant Center in Hershey, PA on Saturday, March 26, 2022.
(Mark Palczewski – For MediaNews Group)

Abby Sharpe finished a stellar postseason with 26 points and didn’t miss after halftime on 7-of-7 shooting. Erin Daley had a double-double while Flanagan scored just two points but utterly controlled play with seven assists.

Aside from a win, it was a weekend of perfection for the Colonials. They were sent off Friday morning with a pep rally at the school, spent Friday night together with a soul-pouring team dinner, watched the Class 5A title game and had a last team lunch Saturday morning before making their way to the arena.

Taking in a game on Friday was important. Colonials coach Dan Dougherty felt Chartiers Valley looked totally frazzled while Cardinal O’Hara was a team in full control and relayed the idea to his players that if they wanted to get the job done, they had to find that same sense of calm.

Playing in an arena that is difficult to shoot in and sometimes overwhelming for newcomers, the Colonials looked like they might as well have played their previous 33 games on the big floor in Hershey.

“In my mind, we were right back at (the District 1 championship at Temple) and I just played like I played at Temple and didn’t let the stadium bother me,” senior Lainey Allen said. “Our coaches always tell us, during the anthem we can look at the stadium and look at the crowd but as soon as the anthem is over, we’re in game mode. We don’t care about anything around us, we’re on the court so our heads are on the court and I think that’s what got us in the game.”

Plymouth-Whitemarsh celebrates after defeating Mount Lebanon in the PIAA 6A girls basketball championship at the Giant Center in Hershey, PA on Saturday, March 26, 2022.
(Mark Palczewski – For MediaNews Group)

Leading up to the game, most had it billed as a clash of powers with the unbeaten Colonials rising from the east and the Blue Devils emerging from the west with just one loss. For half a quarter, it looked like that was the path things would take.

PW got off to a great start. Erin Daley, who was superb with a 17-point, 13-rebound double-double while carrying the primary assignment of guarding Mt. Lebanon’s standout St. Louis-bound senior Ashleigh Connor, had eight points and seven boards in the opening frame but the biggest shot of the quarter undoubtedly belonged to a teammate.

After missing the last two games due to non-COVID illness, Jordyn Thomas not only returned but did so with presence by sinking a three on her very first shot on her way to seven points and five assists.

“This honestly couldn’t have ended in any better way,” Thomas said. “This has been a perfect season for the entire team and I can’t express how proud I am of them.

Plymouth-Whitemarsh celebrates after defeating Mount Lebanon in the PIAA 6A girls basketball championship at the Giant Center in Hershey, PA on Saturday, March 26, 2022.
(Mark Palczewski – For MediaNews Group)

Mt. Lebanon rallied to tie things up 7-7 with 4:41 left in the first. Sharpe took that personally, scoring back-to-back baskets to kick off the first of what would be three decisive quarter-ending runs for the Colonials in the game, ultimately ending in an 8-0 spree and 15-7 lead going to the second.

Sharpe, who was stunned at her point total, called the entire weekend a “business trip” and really wanted to seal the deal as quickly as possible.

Daley spent a week getting ready for her assignment, breaking unofficial orders by starting film study last weekend on Connor. In the team’s season-ending loss last year, Spring-Ford’s Lucy Olsen had shredded the Colonials in an ironwoman effort and Daley knew Connor was capable of the same feat coming off a 27-point semifinal effort.

The junior forward came into the year having lost some of her love for the game but thanks to her teammates and coaches, she felt that fire re-ignite and finished the year as strong as anyone else on the team. At Friday night’s dinner, each player shared something about the season and Daley simply let her teammates know what they all meant to her before proving it on the floor Saturday.

“I had a couple rough practices this week but I told my coaches not to give up on me, I was going to come in here and give everything I had today,” Daley said. “Coach D (Dougherty) kind of put us on the spot and we were all going to have a little heart-to-heart. We all went around the table and said something and I kind of got a little emotional, I kind of broke down but I just shared how these girls have brought me through so much.”

Daley also hit a huge shot in the game, canning a three off a Thomas assist to put PW in front 25-11 heading into halftime. It was an emotional performance, one she felt she owed her teammates but also to her grandfather Ed Givnish, who passed away in December of 2020.

“He was a basketball legend, I think he’s the reason I’m here, it’s in my genes,” Daley said. “My aunt put one of our PW shirts on his grave this morning and when I saw that, I said ‘I’m going to go out there and do this for you.'”

Erin Daley (15) of Plymouth-Whitemarsh drives to the hoop against Mount Lebanon in the PIAA 6A girls basketball championship at the Giant Center in Hershey, PA on Saturday, March 26, 2022.
(Mark Palczewski – For MediaNews Group)

Flanagan had been held in check in the first half, in the sense that she’d only doled out one assist. That changed in a hurry after halftime as she started slicing up the Blue Devils with assist after assist, flummoxing a very good defense all while the Colonial’s lead billowed.

“When was the last time anyone dominated a state championship game like that while scoring two points? Flanagan was insane,” Dougherty said.

“Looking up, seeing the score and that we were winning by 20, I was honestly in disbelief,” Allen said. “I thought ‘we’re really about to win states’ and it was just a great feeling and doing it with my team, I was in shock.”

Dougherty made a nice gesture postgame, pausing his interview to congratulate Connor on a fabulous career and each Mt. Lebanon coach or staffer for a great season as they passed by in the hallway outside PW’s locker room. He felt his team had the perfect approach to the entire trip, spending time together, making the most of their two practices in the area and arriving to the arena following the same routine as every other playoff game to date.

“With the size and athleticism of this team, the bigger the floor is, the more it plays to their advantage,” Dougherty said. “We came in with the game plan of stopping Ashleigh Connor and make the role players make threes for four quarters. Erin’s three and Jordyn’s three to start the game was special and how do you simulate Kate Flanagan in practice?”

Flanagan, like a good point guard, passed off the credit to Daley for her work defensively but also remaining an offensive threat. The two of them held Connor 10 points off her season average, limiting the senior to 12 on 5-of-13 shooting.

“It’s honestly amazing to watch the drive she has and the motor, she does not stop, and I think it pushes everyone else on the team to keep working hard,” Flanagan said. “Ashleigh Connor is a really, really good player but we had an experience in the district championship last year with Lucy Olsen and a lot of us, after watching the Central Dauphin film, started having flashbacks.

“We decided we’re not going to let one girl beat us.”

Plymouth-Whitemarsh’s Kaitlyn Flanagan (right) gets a hug from her coach in the final minutes against Mount Lebanon in the PIAA 6A girls basketball championship at the Giant Center in Hershey, PA on Saturday, March 26, 2022.
(Mark Palczewski – For MediaNews Group)

Sharpe was simply put, a problem and a bucket in the third quarter. She was a problem for Mt. Lebanon because she kept getting buckets, hitting for 10 of the Colonials’ 16 in the frame.

“We came in hot at halftime and I think that really pushed us to the end of the game,” Sharpe, who set a new career-high, said. “It’s all my teammates on that one, I was getting dime passes that just allowed me to finish. My threes, I was calling for it, but it was my teammates who were finding me. We just work so well together because we’ve been together for three years.”

PW blew the lead out to 60-34 before the starting five all walked off together with 39 seconds left. Fiona Gooneratne and Angelina Balcer, the other cogs to the machine this season, were the first to meet them after the coaches as the Colonials reveled in their perfect finish.

No matter what else they go on to do, where their basketball careers lead or life beyond that, nothing will ever take away what the Colonials did this winter.  Each player had their own part, their own path but together, there’s only one way to sum it all up.

Plymouth-Whitemarsh poses for a photo after defeating Mount Lebanon in the PIAA 6A girls basketball championship at the Giant Center in Hershey, PA on Saturday, March 26, 2022.
(Mark Palczewski – For MediaNews Group)