PIAA Class 5A Girls Basketball: O’Hara out to fend off vengeful Chartiers Valley in title rematch 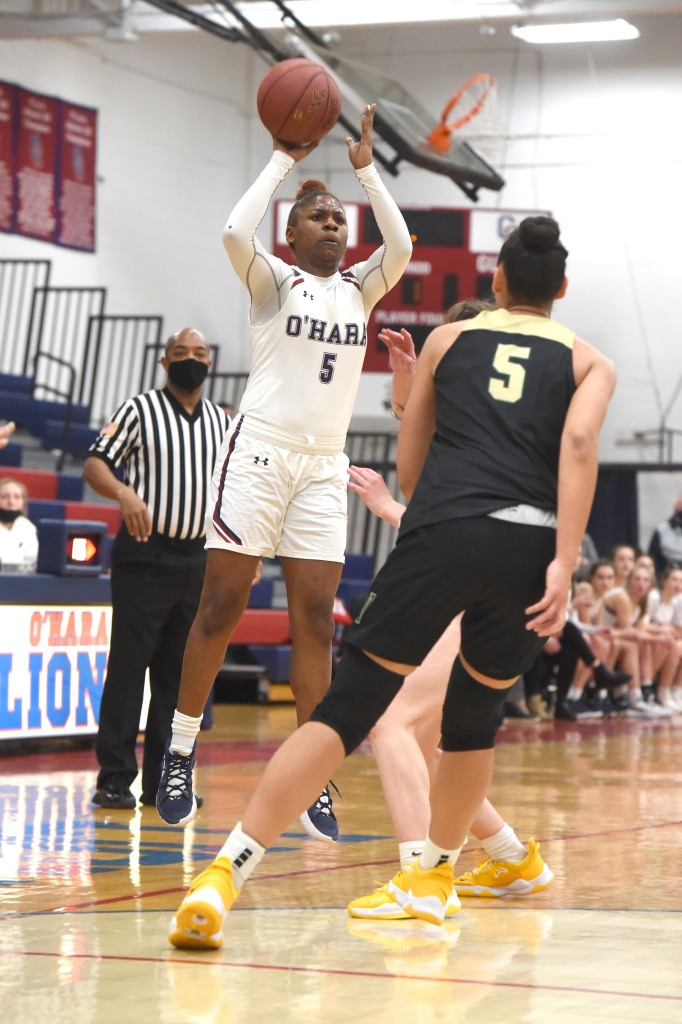 A second consecutive PIAA championship is within reach, but Cardinal O’Hara’s opponent has revenge on its mind.

O’Hara will meet Chartiers Valley for the Class 5A title Friday at the Giant Center in Hershey. The action starts at 5 o’clock and can be watched live on PCN.

The game is a rematch of last year’s state final. O’Hara crushed the Chartiers Valley then, 51-27, to capture the school’s first PIAA championship.

Then-junior starters Maggie Doogan, Sydni Scott and Annie Welde combined for 35 points in the Lions’ trouncing of the Colts. O’Hara won 12 of its final 13 games in a pandemic-shortened season to become the first Delaware County girls basketball team since Archbishop Carroll in 2012 to win a PIAA title. The Lions made two prior appearances in PIAA finals (2009, 2016), losing both times.

After winning a Catholic League championship at the Palestra Feb. 28, the Lions are holding the opposition to 25.3 points per game in the state tourney. This team excels under the bright lights and knows what it takes to win in big arenas. Friday’s finale is no different.

“We’re going to practice what to expect from them and we’ll do our best to win,” Welde said after the Lions’ 50-18 victory over Mechanicsburg in the semifinal round last weekend. “It’ll be exciting, especially for the younger kids. We have the experience, which is huge, but (the underclassmen) have never been there before. … Some teams get nervous and others get excited. We’ll be out there excited and ready to go against a great team.”

Doogan, the reigning Daily Times Player of the Year, is off to Richmond in the fall. Scott is headed to Marshall and Welde is a preferred walk-on at Villanova. The difference maker on this year’s Lions roster is freshman wing Molly Rullo, an extremely versatile player who can score from anywhere on the floor. Rullo has been excellent in all the big games and is coming off a 17-point performance in the semifinal win.

“I just hope we get people to come this time,” Doogan said, referring to the lack of a student section in Hershey last year. That, of course, had a lot to do with the pandemic. “For us, it’s like any other game. Nothing changes. It’s great to go back and have a chance to end our season with a win.”

Sophomore guard Greta Miller has started for junior Bridget Dawson, who is ineligible, during the state tournament. Miller is backed up by sophomore guards Joanie Quinn and Carly Coleman.

This season’s battle might not be so easy for the Lions, but the Catholic League champions remain the favorite against a Colts team that features five senior starters, four of whom are playing at the Division I level next year.

“They’re going to be out for blood,” O’Hara coach Chrissie Doogan said last week. “We’ll get back Tuesday after a couple days off and get ready. I think it’s nice because the kids will kind of know what to expect. Last year we had no idea what to expect. We have a little bit of experience this year, so we’ll see…”

Chartiers Valley is loaded with talent. Senior guard Aislin Malcolm averages 17.5 points per game and is bound for Pittsburgh. Columbia recruit and forward Perri Page averaged 16 points. The 28-2 Colts also include Northeastern recruit Marian Turnbull  and twins Hallie and Helene Cowan, who are committed to Seton Hill. Turnbull was the only starter who did not see playing time in last year’s game.

O’Hara limited Malcolm and Paige to a combined 5-for-23 shooting and 17 points last year.

Chartiers Valley has played in each of the last three Class 5A finals. The Colts defeated Archbishop Carroll for the 2019 championship. There were no PIAA finals in 2020 because of the pandemic.

CV was this year’s runner up in District 3, falling to Gettysburg. The Colts avenged their loss in the district final with a 39-35 victory in the state quarterfinals. They earned a 59-50 decision over District 7’s McKeesport in the state semifinals.

While O’Hara’s record reads 5-24 after the PIAA took away 23 wins due to a clerical mishap surrounding a transfer player’s eligibility, the team hasn’t lost a game played since Feb. 11 to Plymouth Whitemarsh. The Lions, playing without two starters, fell 42-30 to the undefeated Colonials, who will compete for a Class 6A title Saturday.