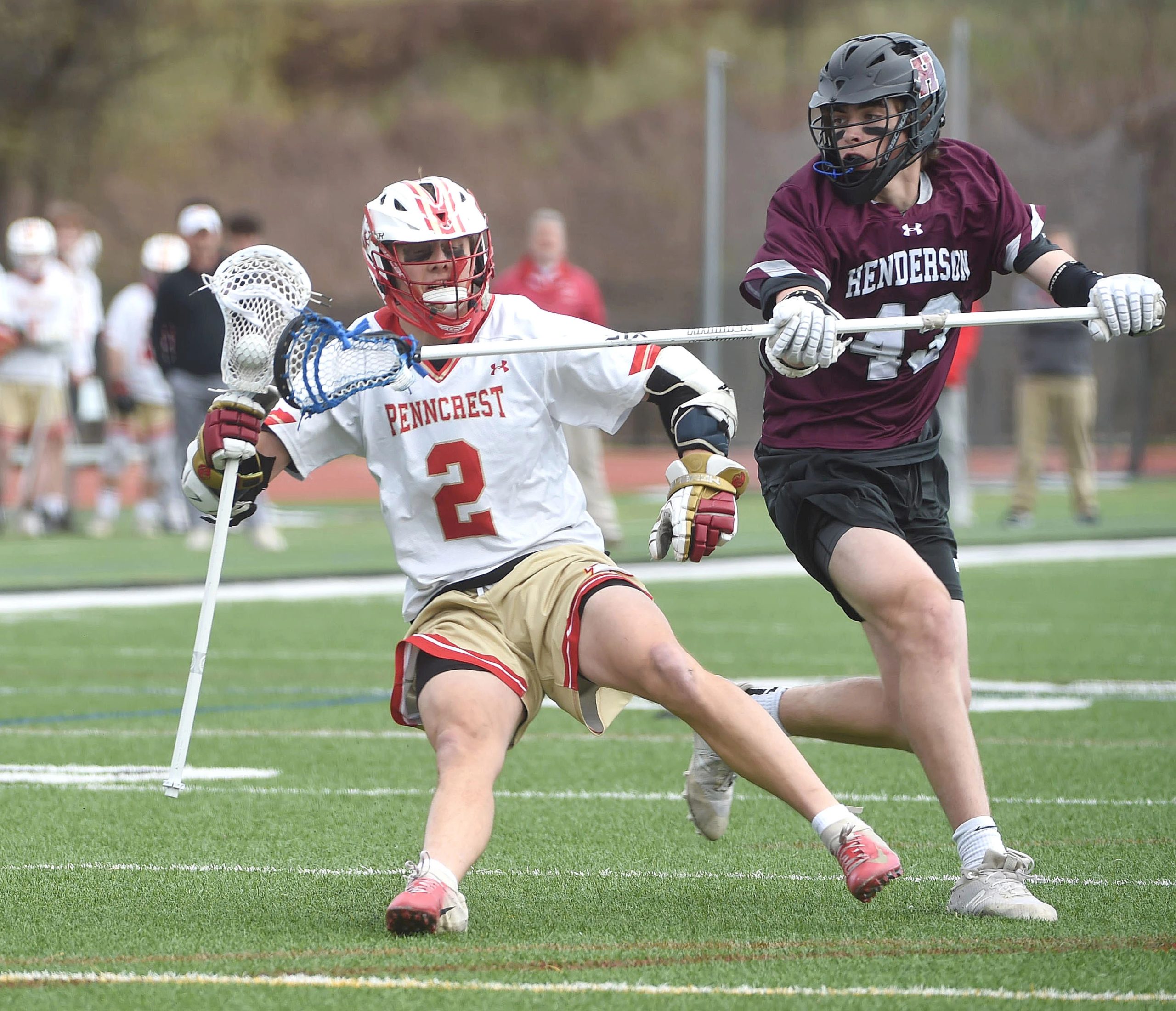 MIDDLETOWN — All but overlooked last spring in a crazy-good season of Delaware County boys lacrosse was the grit of Penncrest.

The Lions took their lumps against the bigger Class 3A schools in the regular season but once the Class 2A playoffs began, bounced back to claim their first District 1 championship.

Penncrest also advanced to the quarterfinals of the state playoffs before getting hammered by eventual champion Allentown Central Catholic.

The Lions finally got a chance to show off the new District 1 championship banner Friday at sunny Louis Scott Field. Affixed atop the press box in the home seating area, it’s in constant view of the players who earned it with blood, sweat and determination.

Picking up where they left off in the good times, the Lions rolled to a 13-4 nonleague win over West Chester Henderson Friday, Jason Poole scored six goals and had one assist and Brennan Kraut adding five goals to defeat a squad coached by an alum taking over for a legend.

“For a first game, I thought we came out firing,” Poole said. “I think the second half we played way better than the first half. We only let in one goal. But we’ve still got a lot to work on. We’ll see what happens. We’ve got a lot to back up as district champs.”

Kaut opened the scoring for Penncrest just 24 seconds into the game with a tracer that goalie Ryan Timmins couldn’t see, much less stop.

Poole scored the next three goals to effectively put away Henderson and head coach Sean Evans, a 2006 grad and lacrosse All-American with the Warriors replacing living legend Paul Stankewicz, who spent 37 years filling out the lineup card. Evans starred on the last Henderson boys lacrosse team to win a league pennant. He’d been an assistant coach with the Warriors for 11 seasons.

“We’re rebuilding, working hard, just trying to get the guys out and get them working,” Evans said. “We’re just trying to work with these guys, get them excited. The numbers are coming back up here and at the middle school. I’m excited to be back here leading this program.”

Penncrest head coach Wayne Matsinger, on the other hand, led the Lions to a state title in 2014. Mats is eager to figure out how best to replace goalie Andrew Wickman, who was sensational last year and is now playing at Virginia Tech.

Lions senior Luke Pyle-Ballak started Friday and made two saves. Junior Mark Feinman stopped three Henderson shots in the fourth period. They aren’t the biggest guys, but that isn’t a problem for Matsinger.

“We were blessed to have Andrew last year,” Matsinger said. “We’re changing our philosophy and how we’re defending the cage this year. Our team goal target is always six goals a game, no more than that. That’s going to be a stretch for us this year but we’re counting on our offense putting up big numbers. I have lot of confidence in Luke Pyle-Ballak and Mark Feinman. Both are outstanding. They’re smaller in stature but they stop the ball. They’re doing a fantastic job. They’re ahead of the curve right now for where we expected them to be.”

Speaking of goalies, the Lions could have had 18 or 19 goals Friday if not for the spirited play of Ryan Timmins. The Henderson senior stopped 15 mostly accurate, almost always lethal shots.

In the second period the Lions pelted Timmins from every angle yet he made four saves to at least keep them in the same area code as the Lions. Goals by Braeden O’Connell, Max Abrahams and Sean Surswiec got the Warriors within 6-3 late in the second frame.

Kaut scored with 38 seconds left to give the Lions a 7-3 lead at the intermission. In the third quarter the Lions shutout Henderson while Kaut scored two more goals, Poole and Steven Woolery one each.

The fourth quarter belonged primarily to the subs.

“We made a lot of mistakes and we’re going to build off those mistakes,” Matsinger said. “Everything we did mistake-wise can be fixed. We’re just looking to improve every single day. We’ve got some really nice young players, but I have a very seasoned core of seniors that we’re relying on. We return our entire offense just about from last year. We’re counting on those guys but that’s not our full contingent. We have a few guys missing. Once we get those guys back that will help.”

Until they reach full strength, the Lions are in safe hands. Instead of dwelling on the painful end to Penncrest’s 2021 season, Poole and the seniors cannot wait to see how far they can go this spring.

“Definitely it was a rough one,” Poole said of the loss in the quarterfinals. “But I think we’re better this year. I hope so.”