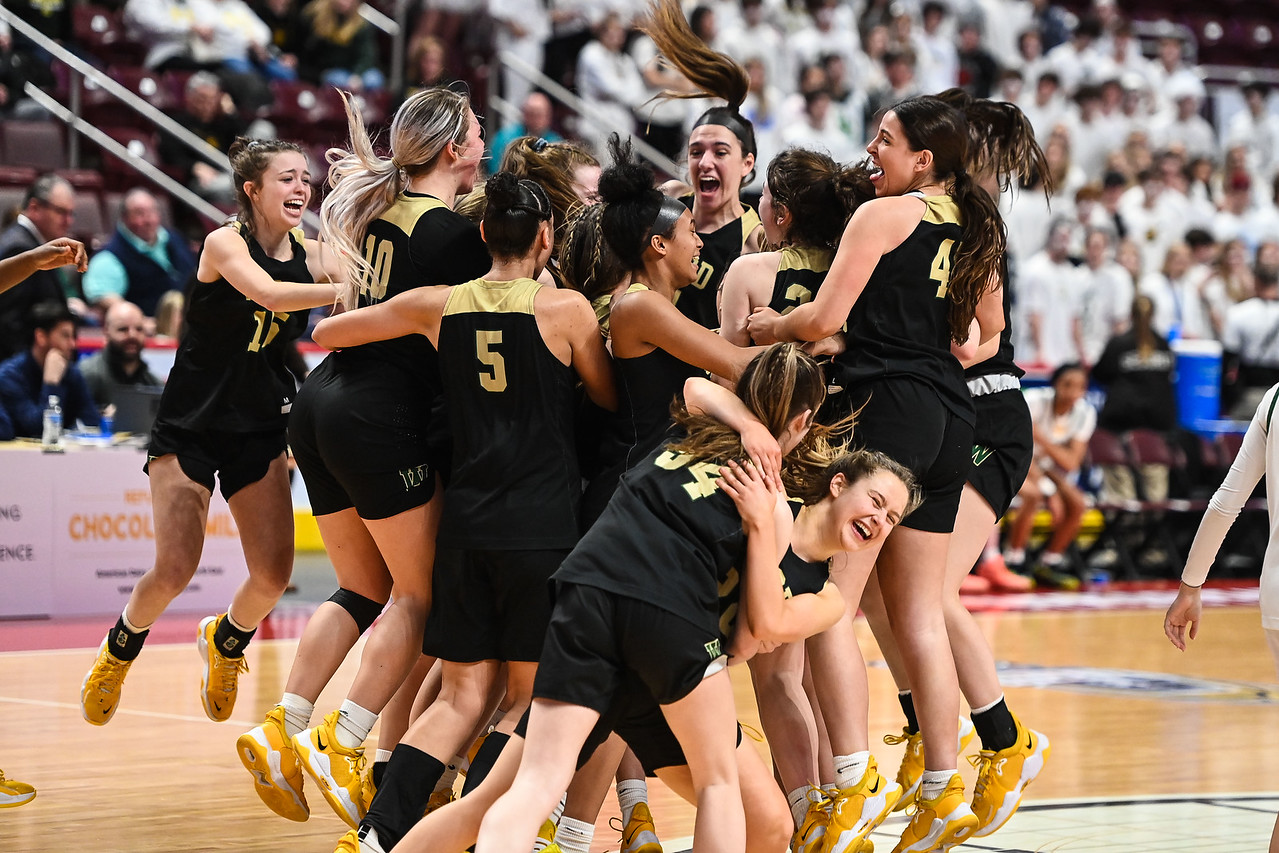 Starting their state playoff run under the pressure of trying to win back-to-back titles, Archbishop Wood’s girls’ basketball team needed a rallying cry. Noticing a trend in the attire of their opponents, mostly lumberjack-themed with a “Chop Wood” motif, Alexa Windish provided exactly what the Vikings needed with three simple words.

Lansdale Catholic tried, valiantly in a tremendous effort, but even the Crusaders’ magic run through the state playoffs wasn’t enough to chop down Wood. Thanks to another strong defensive effort and fueled by a size advantage powered by a state record game from Deja Evans, the Vikings went back-to-back, defeating LC 57-45 in the PIAA 4A title game Thursday at Hershey’s Giant Center.

“It’s an unbelievable feeling,” Wood senior Ryanne Allen said. “To be able to go out on a high note and finish here at Wood with a state championship, there’s nothing better.” Brianna Bowen (right) of Archbishop Wood celebrates with the student section after defeating Lansdale Catholic in the 4A PIAA girls basketball championship at the Giant Center in Hershey, PA on Thursday, March 24, 2022.
(Mark Palczewski – For MediaNews Group)

Evans, the junior forward, set a state title game record with 20 rebounds while also scoring 15 points for her fifth straight double-double in the state tournament. Allen didn’t have her best shooting night but still finished with 17 points, senior Bri Bowen had 14 points and senior Shannon Morgan scored four in her last game with the Vikings.

LC was powered by 17 from junior Gabby Casey, who fought hard against a Wood defense led by Evans and Delaney Finnegan that was stacked against taking away her drives to the rim. Olivia Boccella scored 11 for the Crusaders, who were playing in their first state title game and senior Lauren Edwards scored eight.

If anyone were foolish enough to guess Thursday’s outcome as a likely Wood rout based on the team’s regular season meeting, they wouldn’t have been paying attention to what the Crusaders have done the last three weeks.

“Probably heart, we knew they had more experience than us, that they were bigger, faster, stronger but those are all things anyone can see, the optics when you walk into the arena show you that but what you can’t measure is the heart,” LC coach Eric Gidney said. “They really bought into everything as a staff we wanted them to believe.” Gabby Casey (15) of Lansdale Catholic points upward while being introduced before tipoff against Archbishop Wood during the PIAA 4A girls basketball championship at the Giant Center in Hershey, PA on Thursday, March 24, 2022.
(Mark Palczewski – For MediaNews Group)

Some teams come to Hershey and the combination of the venue, stage and atmosphere break them before the first quarter is halfway done. That wasn’t the case for the Crusaders who scored the game’s first five points, led 12-7 after one and 15-7 early in the second when Edwards hit the first of her two 3-pointers in the frame.

Gidney knew his team would be at a disadvantage from a size perspective and the LC coach even expected to lose the rebounding battle but his sticking point was that the Crusaders couldn’t get dominated on the glass. With no way to stop Evans, LC nearly got doubled up on the backboard 42-23 and it took its toll. Delaney Finnegan (20) of Archbishop Wood drives to the hoop against Sanyiah Littlejohn (3) of Lansdale Catholic during the PIAA 4A girls basketball championship at the Giant Center in Hershey, PA on Thursday, March 24, 2022.
(Mark Palczewski – For MediaNews Group)

Another three from Edwards extended the lead to 18-9, but Wood’s defense got the first of several important defensive stretches it had in response, quelling the Crusaders for about four minutes and clawing back within a point. LC rebuilt a 22-18 edge but a three by Allen with eight seconds left on the clock cut the lead to one at the break.

“I’m proud of them, they’ve put in the work. They’re in the gym on their own, they’re in the gym with us, they’re in the weight room and they sacrifice to be a part of a better than just being a bunch of individuals,” Wood coach Mike McDonald, who won his fourth state title leading the Vikings, said. “We talked about it in this final stretch, we’re a beatable team if we want to do it individually while we’re going to be really hard to beat if we play as a team.”

For as off as the Vikings had been on offense through 16 minutes, they only trailed 22-21. Archbishop Wood celebrates its vicotry over Lansdale Catholic in the PIAA 4A girls basketball championship at the Giant Center in Hershey, PA on Thursday, March 24, 2022.
(Mark Palczewski – For MediaNews Group)

“The goal was not to win it through each quarter, just put ourselves in position to pull it out at the end,” Bowen said. “Little by little, there were going to be highs and lows in the game, so we just had to play through it. We weren’t shooting the ball well, so we just had to start attacking the basket.”

Wood opened the second half with a 6-0 run and held LC scoreless for three minutes, but it wasn’t enough to deter the Crusaders. Lansdale Catholic, which starts two freshmen and a sophomore, trailed 35-29 going into the final quarter and thanks to six straight from Casey, had tied the game 90 seconds into the fourth.

The junior forward was gutted that LC couldn’t bring it home for Edwards and Erin Clark, the team’s two senior captains, but knew every one of her teammates gave all they had to the effort. Even Allen noted how much more confident the Crusaders were than in the regular season, a game Wood won by 24 points, and Casey was already thinking of the motivation the defeat would be for her team in the months ahead.

“It was amazing, I’m so proud of everyone,” Casey said. “We all gave our hearts out on the floor. We had a lead, but Wood’s a great team and we couldn’t keep it. I think it was an all-around great effort and I believe we’ll be back next year.

“The fans mean everything to us, it shows LC is a community and the way we had the whole student section filled up, we’re all grateful for the support and thankful they came.” Ryanne Allen (5) of Archbishop Wood drives to the hoop against Nadia Yemola (10) of Lansdale Catholic during the 4A PIAA girls basketball championship at the Giant Center in Hershey, PA on Thursday, March 24, 2022.
(Mark Palczewski – For MediaNews Group)

Casey found Nadia Yemola on a drive-and-kick, with the freshman knocking down a three to give LC a 38-37 lead with 5:31 left in the game. McDonald opted not to call a timeout and his team rewarded his confidence by holding the Crusaders scoreless for the next four minutes while going on a 9-0 run to turn the tide.

“That was big,” Wood’s Delaney Finnegan said. “We focused on defense as much as offense, we really had to find a good balance. When they hit that three, we weren’t fazed, we’re used to playing in big games so we knew to shake that off and go pull out the win.”

Morgan, who had a driving layup early in the run, felt the game summed up a lot of Wood’s strengths this season from it’s defense to it’s depth, which gave the starters a last push in the fourth.

“I’m really proud of all of them,” the senior co-captain said. “We have a lot of girls on this team that can go and sub in, so we’re lucky and I think everyone was able to do their little bit and play a part which helped us to win.” Archbishop Wood celebrates its vicotry over Lansdale Catholic in the PIAA 4A girls basketball championship at the Giant Center in Hershey, PA on Thursday, March 24, 2022.
(Mark Palczewski – For MediaNews Group)

The Crusaders have four starters back and while Gidney agreed there will be new expectations and a target on them next season, he thinks that’s something this group will respond well to. He was also glad his team’s first exposure to the state title stage came against a program like Wood.

“It’s tough to win one state championship and come back and win another state championship,” Gidney said. “They’ve got a standard there and it’s not as easy as some people probably think it is, I’m glad we had to try and go through them to do it. If we’re going to win it, let’s try and take it from the team that won it last year.”

After a 2-11 campaign last season, the Crusaders crushed all expectations for this year but left still wanting more.

“This is all motivation,” Casey said. “We’re all a little sad now, but at the same time happy we made it here. I  have no doubt we’ll all come back better than ever.”

Wood’s repeat was its first since the 2016 and 2017 teams went back-to-back in Class 5A. Allen, Bowen and Morgan added two more state titles to the program’s banner collection but they want the returning players to do even more next year, with Morgan eager to see another PCL title on top of a three-peat.

On Thursday night however, the three seniors were just ready to climb back on their bus and start up their chant.

“It’s been our thing during this whole state run,” Allen said. “Being able to do it now, it feels even better.” Archbishop Wood coach Mike McDonald (left) discusses a play with Ryanne Allen during a break in the PIAA 4A girls basketball championship at the Giant Center in Hershey, PA on Thursday, March 24, 2022.
(Mark Palczewski – For MediaNews Group)

The play of the game came off a turnover in the third quarter.

An errant pass by one of his players came right to McDonald on the bench. The Wood coach squared up to the basket and left off a jumper that didn’t go in.

“I really don’t know what I was thinking,” McDonald said. “I was just trying to have some fun. I coach AAU and they let the coaches do it all the time.”

Immediately after shooting, McDonald apologized to the officials, who met and ultimately decided to issue a bench warning instead of a technical foul. Archbishop Wood poses with their championship trophy after defeating Ladsdale Catholic in the 4A PIAA girls basketball championship at the Giant Center in Hershey, PA on Thursday, March 24, 2022.
(Mark Palczewski – For MediaNews Group)