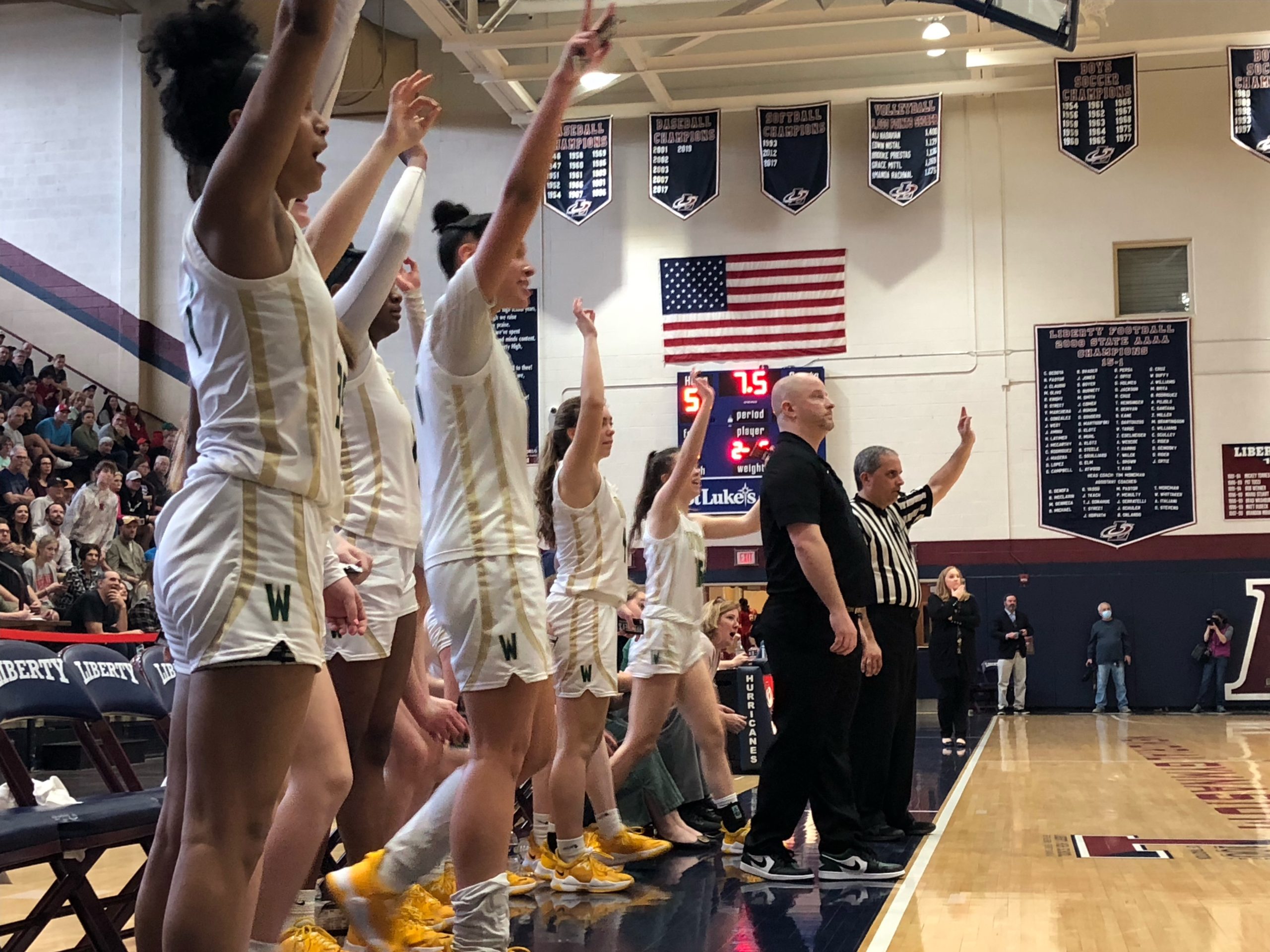 Wood’s bench mob was the difference on Saturday as the Vikings topped a terrific Jim Thorpe team 57-42 in their PIAA 4A girls’ basketball semifinal game at Bethlehem Liberty.

“Our depth as a team is one of our biggest strengths,” sophomore Ava Renninger said. “We’re able to sub in and sub out a lot, so we’re not as tired as other teams and we all feel fresh.”

Allie Fleming led the bench crew and the Vikings with 17 points as the lefty sharpshooter connected on 6-of-7 shots including five 3-pointers. Renninger and Kara Meredith, the other two members of the Wood reserves who saw big minutes on Saturday, tallied seven points between them to give the subs a substantial mark on the Vikings’ offensive output.

Wood, the defending state champion, advances to its second straight title game where it will meet a familiar foe in Lansdale Catholic, a 56-50 winner over Villa Maria (Erie) in Thursday’s 4A championship title at Hershey’s Giant Center. It  is the first-ever meeting between two girls’ programs from the Philadelphia Catholic League in a state final. Ryanne Allen, whose excellent off-ball movement had the Jim Thorpe defense flustered, scored 11 points and forward Deja Evans was a presence inside with 10 points and 16 boards, her fourth straight double-double in the state tournament. Bri Bowen added eight points and six rebounds for the Vikings.

In a match-up against an Olympians squad that boasted four senior starters all averaging double-figures with a tough, physical edge to their play, Wood needed every bit of its depth in a hot gym in front of a large Jim Thorpe crowd. Where the Vikings could sub at will, the District 11 champions only used one sub prior to emptying the bench in the final minute with the outcome decided.

With 18 of Wood’s 35 first-half points coming from the bench, even onlookers new to seeing the Vikings came away impressed.

“We’ve got quite a bench,” Vikings coach Mike McDonald said to an out-of-town media question. “We take pride in it. We tell them all year we’re looking at you to step up. It’s why we play a lot of kids throughout the year so in these moments depending what the other team is taking away or giving us, we want them to be ready.

“You can’t just plug them into a game like this.”

Jim Thorpe, led by a three-time all-state selection and Holy Family recruit in Skylar Searfoss, weren’t intimidated by Wood’s championship pedigree and held an 8-6 lead when the Vikings reserves entered for the first time midway through the opening quarter. Meredith immediately got fouled on a drive, splitting the bill at the line, then she crammed a three in between a pair of long-range makes by Fleming that put the Vikings ahead 15-10 after one.

Fleming and Meredith also had threes in Wood’s game-changing run a round prior against Gwynedd Mercy Academy and felt their exposure to all kinds of competition in the regular season made it easier to go out and shoot with confidence in the biggest games of the year.

“In practice, we all work together and we switch our rotations so everyone is used to playing with each other,” Meredith said.

Usually, Wood’s waves of subs will wear down an opponent through simple attrition but McDonald credited the Olympians for never seeming to break down at any point of the game. It certainly wasn’t for lack of trying as Wood put a lot of effort into the game whether it was Evans battling for second, third and even fourth-chance opportunities under the backboard or Allen running all sorts of cuts and fakes to shake loose of defenders and Bowen’s repeated strong drives to the rim.

The reserves meanwhile, just kept shooting and just kept hitting. Back-to-back treys by Renninger and Fleming following an Allen hoop made for an 8-0 run that opened up a 20-16 lead to double-figures briefly and a Renninger assist to Bowen and a third first-half trey by Fleming helped send the Vikings to the break ahead 35-23.

Fleming, who only missed once in six attempts from deep, said her make against GMA helped her bust out of a slump and it carried into Saturday.

She ended her big day with a pair of treys in the third quarter, both from the same spot in the left corner that helped the Vikings to a 50-32 lead heading to the final frame. “We had a shootaround before the game and it felt like I was making most of my shots,” the junior said. “In warm-ups, I started feeling more confident as we got closer to starting and I was just glad I was able to hit a few in the game.”

As important as their offense was, the super-subs also provided needed defense. Meredith, the tallest of the trio at 6-foot, helped spell Allen, Evans, Bowen and Delaney Finnegan and said she picked up early on Jim Thorpe’s size and physicality and made sure to be strong in anything she did with the ball.

Renninger and Fleming helped pick up senior Shannon Morgan, who played an excellent game guarding Searfoss. The Olympians’ all-time leading scorer finished her stellar career with a team-best 13 but all of her shots were quite difficult and Morgan kept her from being a playmaker on top of scoring.

“Shannon did a great job denying her the ball,” Renninger said. “We wanted to get the ball out of her hands so she couldn’t do as much offensively.”

Jim Thorpe became the first team to put more than 30 points up on Wood’s defense and a tough score by Searfoss with 3:15 left in the fourth cut the lead to 54-40. Wood settled in, scored a few more points then got the rest of its subs a chance to play. Archbishop Wood’s bench reacts to a call going against the Vikings in the state semifinals.

“We knew they were going to have a huge student section, their theme was ‘Chop Wood’ or something so as a team, we were ready to come out together,” Meredith said. “No matter which of us were out there, I think we all stayed strong.”