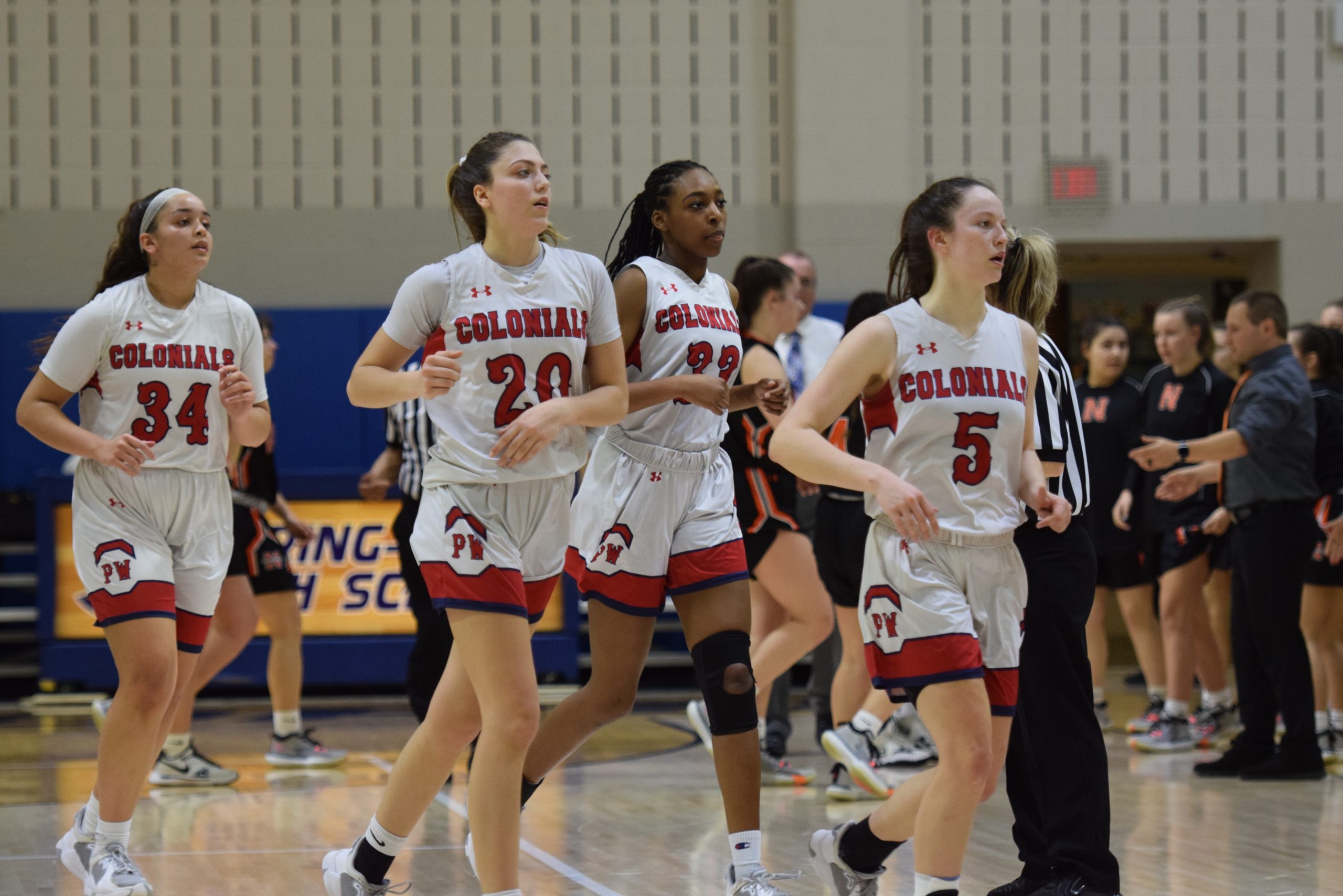 ROYERSFORD >> When Fiona Gooneratne hits an outside shot, Plymouth Whitemarsh gets more than just the three points on the scoreboard. The beloved senior brings her teammates and fans to their feet and gives the Colonials a jolt of energy going forward.

In the second round of the PIAA-6A state playoffs, Gooneratne’s three-pointer late in the second quarter helped start a 15-2 run that turned a one-point deficit into a 12-point halftime lead. (1-1) Plymouth Whitemarsh never looked back, cruising to a 44-28 win over (11-2) Northampton Friday night at Spring-Ford High School.

PW advances to the quarterfinals, where they’ll face (1-6) Perk Valley Tuesday at a site and time to be determined.

“It’s not just basketball,” PW coach Dan Dougherty said. “It’s an emotional lift. (Gooneratne) has the green light to shoot when she’s open. That’s a shot that we practice and she practices. It was nothing but net… It calms everyone’s nerves. She’s performing in the musical (Saturday) night… She’s just such a great kid, easy to root for. When she goes in it’s not a drop off. There is no drop off when she goes in. She gives us huge minutes and can score and plays fearless. That’s what you need from a bench player that goes in – to play fearless so the other team doesn’t try to attack.”

“We all trust Fiona 110% to take that shot,” PW junior Erin Daley said. “She’s made them before. She’ll keep making them. I think it gives us all – the crowd too – it gives us a big lift of momentum and that just keeps us going.”

Junior Abby Sharpe put the Colonials (31-0) ahead for good, 11-10, with a layup in the second quarter before Gooneratne knocked down her three-pointer to extend the lead to four.

The Konkrete Kids (23-7) responded with a basket to get within two, but that’s as close as they’d get. Sharpe added four more points while senior Lainey Allen and Daley each added three before half for 10 straight points and a 24-12 lead at the break.

PW’s defense held Northampton to just two points in the second quarter. Daley was a force in the defensive paint, blocking three shots in the quarter and grabbing five rebounds.

“(Northampton center Grace Lesko) was definitely a little bit bigger than me and maybe a little stronger, I want to say,” Daley said, “but the past few days in practice (assistant coach Bridgette McKnight) works me really hard to be able to play the same way as her. Coach B studies film and does the same things that she does. I knew I wasn’t only going to be able to get over the top of her shoulder, I was going to have to work very hard to get fully around her. I knew I had (senior) Jordyn (Thomas) and my help behind me because we knew the gameplan coming in.”

“Erin – that’s why schools are starting to notice her,” Dougherty said. “That mentality doesn’t show up necessarily in the spring or summer and everything that she has, but now that some college seasons are coming to an end and they’re watching our team play, they’re like, ‘Oh wow. Look at this kid that can defend a 5-foot-5 guard and a 6-foot-2 post.’ She’s really talented. She’s stronger than she looks and she can score offensively, too. She had a really nice finish with contact in the first half.”

“I could tell you (Northampton) wasn’t used to getting their shots blocked,” Daley said. “Maybe that brought them down a little bit. Lainey blocking someone’s shot and her getting hype is just great. It really keeps everything going.”

The Colonials got off to a slow start. It took two-and-a-half minutes for them to score their first basket and they trailed, 10-9, at the end of the first quarter.

“I thought there was a lot of nerves out there tonight,” Dougherty said. “A little bit of that’s on me because I hammered them in practice yesterday. We had a bad practice and I really was frustrated with them. I thought that carried over to the beginning of the game today. It’s understandable, I feel like we’re in our sixth month of the season almost.

“They settled in. You can’t press every team and we couldn’t press this team tonight. We were making lots of mental mistakes in our press and you’d think by Game 31 that wouldn’t happen, but just mental breakdowns in the press and missed easy layups to start the game, too.”

Due to the pandemic, the 2021 district championship was played in the higher seed’s gym and only the district champion advanced to the state playoffs. The Colonials 2021 season ended at Spring-Ford High School.

“This gym’s been a house of horrors for us,” Dougherty said. “Our season’s ended here multiple times. We never won a game here. Cheltenham used to be that way when we had (2018 grad) Taylor O’Brien’s group. We had never won at Cheltenham. Then we went in states and had to play McCaskey and CR North there and we started winning there.”

“The first thing I said is I felt PTSD from (last year’s championship) walking off the bus,” Daley said. “I did get a little deja vu, but it’s the same thing as going into the district (championship) game. You just want that revenge. When you’re playing Spring-Ford in the championship, they still have that name on their jersey and we were like you ended our season last year, we don’t want that anymore. Last year we were here and this gym ended our season. We didn’t want that here either.”

“It gave fuel to our fire,” Gooneratne added. “We didn’t want this to be the reason that our season ended again. It feels really good to be able to kind of reclaim this and not have that be our memory we have.”