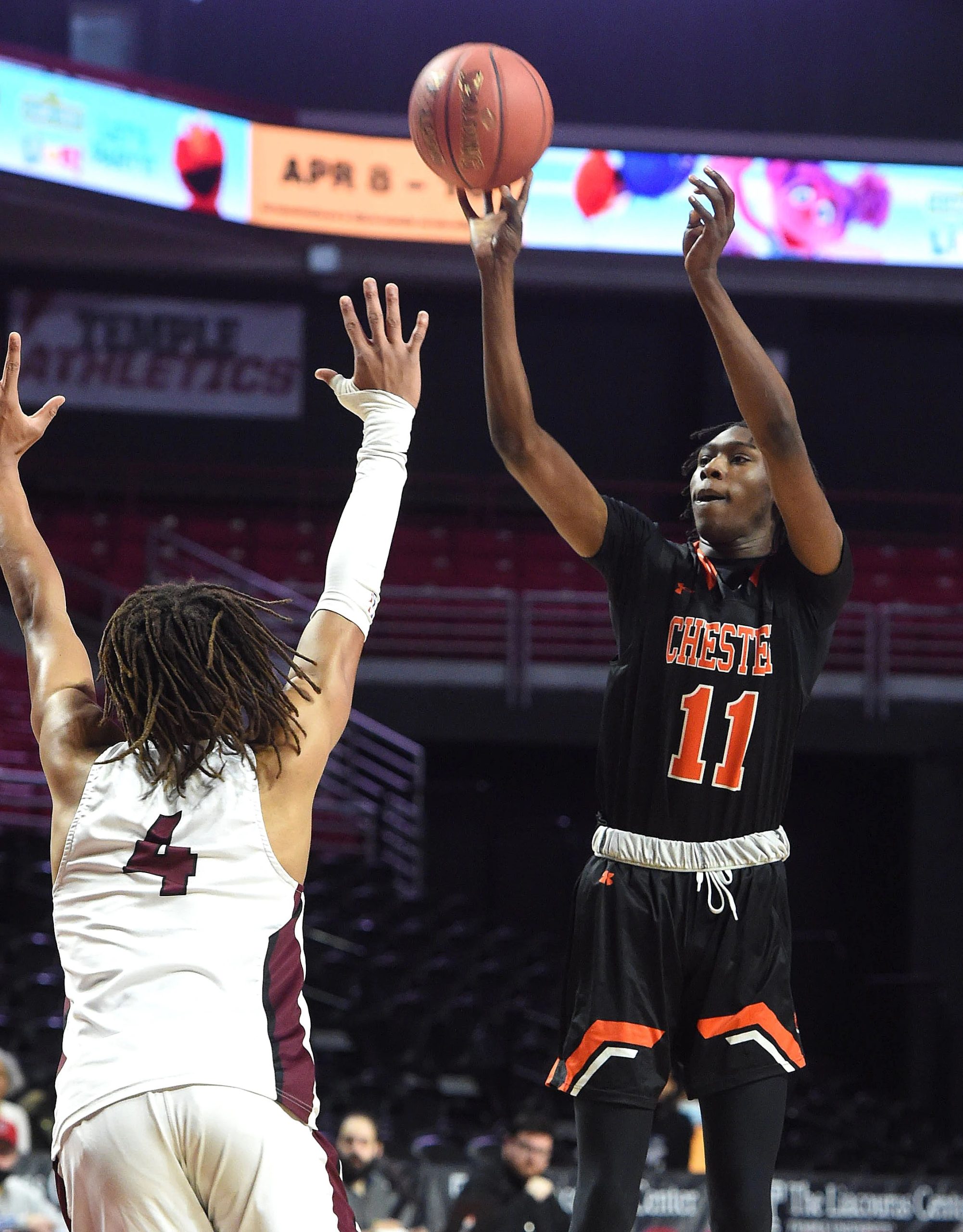 CHESTER — Every time he watches Kevin Rucker play, Keith Taylor sees a little of everything.

He sees a long, developing sophomore able to handle on the perimeter, shoot and maneuver inside. He sees a player capable of making the difference in a run to the PIAA basketball championship. He sees talent, even it is a little raw.

“He reminds me of Kevin Durant, just with the way he plays,” said Taylor, the Chester High coach. “He just has to be a little smarter and a little stronger with the basketball.”

So it was Tuesday when Rucker battled for 17 points to push the Clippers to a 61-52 victory over Exeter in the opening round of the PIAA Class 5A tournament. Not only does Taylor see every side of Rucker, but, like everyone else in a nearly full Fred Pickett Jr. Gymnasium, he saw it in two ways.

There was the first quarter, when Rucker wore No. 11.

Then there was the rest of the game, when that would have been him wearing No. 35.

“I guess I got scratched on the forearm,” Rucker said “There was some blood. So I had to change the shirt. It wasn’t that serious. I didn’t mind. But I just like No. 11.”

In a game against the now 13-14 Eagles that was scratchier than Taylor would have preferred, the 19-3 Clippers scurried from a 45-45 tie with 6:13 to play to win a second-round date against Archbishop Ryan at a site to be determined. Ryan was a 75-48 winner Tuesday over West York and, of more relevance to Chester, knocked the Clippers out of the last state tournament, 85-63.

The nature of the Exeter game left Taylor a bit concerned.

“We didn’t play well,” he said. “I don’t think we played smart, smart basketball at times. We played hard. But we didn’t play smart at times. If we come with that Friday, it’s going to be a long night again, just like it was last year.”

The Eagles fell behind early, but battled Chester underneath and shot just well enough to force the late tie on an Anthony Caccese layup. But that’s when the Clippers took their defense up a notch, concocted that 8-0 run and kept control.

“Their pressure will wear on you after a while,” said Exeter coach Matt Ashcroft. “We thought if we could get that final stanza kind of neck-and-neck – and it was a one-point game after three quarters – then we would like our chances.”

Cassese would fight for 16 points, all on contested layups. Colin Payne would add 15 points, including nine in the first half. Zyion Paschall did deposit a three-pointer with 2:15 left to cut the difference to 56-50, but Exeter was forced to foul at the end and the Clippers were just efficient enough from the line to avoid a serious late threat.

That meant Exeter would have to settle for the experience of playing in its first state tournament game since 1999.

“We had the toughest nonleague schedule in our district out of 118 teams,” Ashcroft said. “We knew we were a .500 ballclub coming into this game, but that we were better than our record shows.”

The Eagles were also aware of their surroundings, in a gym with eight state championship flags, five of which were hung since last Exeter was in the tournament.

“You have to give credit to Chester,” Ashcroft said. “It was great experience, I am proud of our players. Walking in here, maybe you get caught up in the aura of Chester. But give our kids credit. They were here on a business trip, and it showed.”

For the Clippers, the state tournament is always the first order of business. That’s what Taylor reminded them afterward, that just winning the District 1 championship is never satisfactory in that program.

“Maybe were too hyped from that game at Temple,” said Rucker, of the championship victory over Radnor. “And it carried over. It showed us that we have to be ready.”