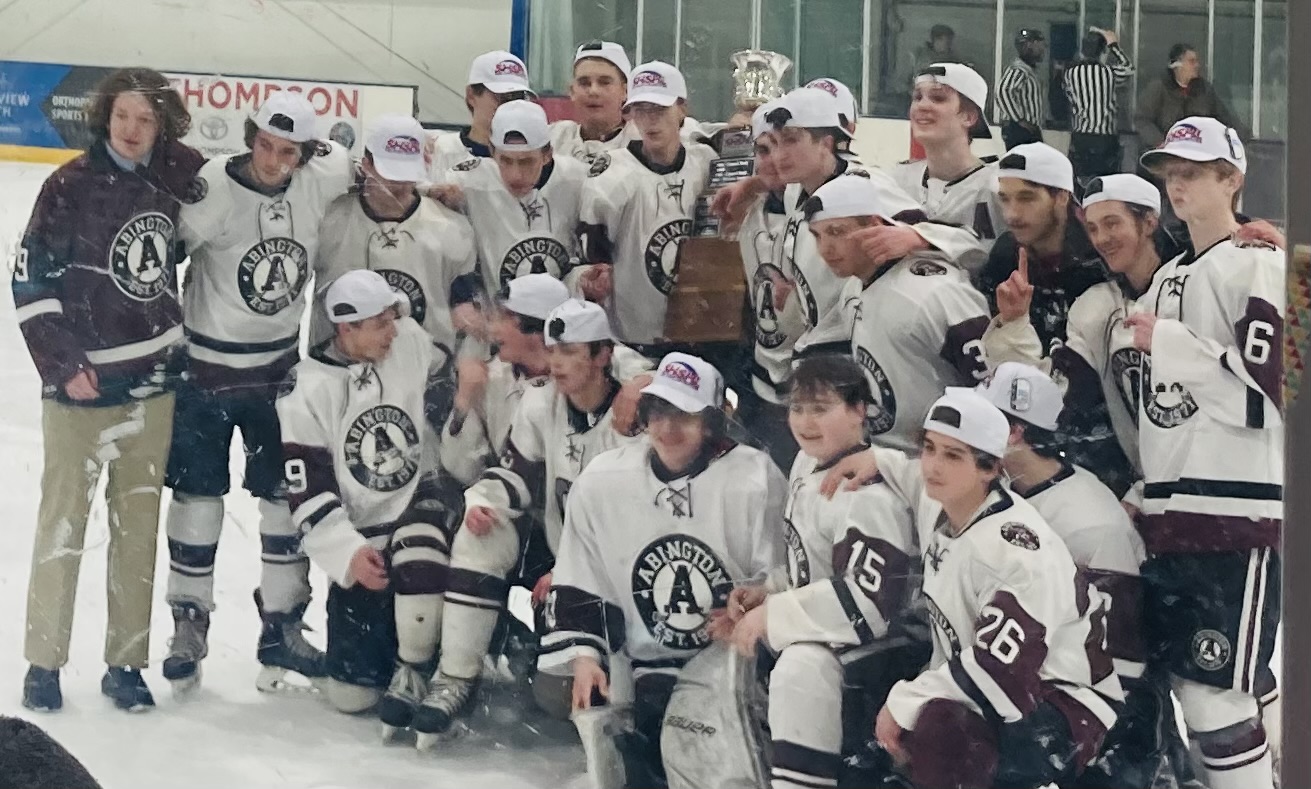 “This started 363 days ago,” Ghosts coach Ken Brzozowski said. “We lost to them last year (in the final), so this was a preseason goal that we had and the boys just played absolutely spectacular throughout the year.”

“We knew it was gonna be a grind-out game,” said Brzozowski, who guided the Ghosts to an unbeaten run through the American. “The last game we played them, it was a 4-3 game (and win for Abington), so it was no surprise. We knew that we were gonna get the best game they were gonna throw at anybody all year. This is a championship game and everybody plays at a higher level.”

Wissahickon, battling to the finish, held the Ghosts to their lowest shot total (23) all year, but Abington made those shots count. The Ghosts also killed off penalties with a passion and got outstanding goaltending from Ben Panella (37 saves).

Ben Panella got the win in goal for Abington in its finals victory over Wissahickon on Thursday, March 3, 2022. (Kev Hunter/MediaNews Group)

“He played spectacular,” Brzozowski said, “the best game I’ve ever seen him play.”

Panella was part of a tremendous goaltending tandem this year for the Ghosts, along with Sam Nemec.

“I love Sam. I love playing with him,” said Panella. “Either one of us would have played just as well in that game.”

Matthew Cholaj and Patrick Stelacio each scored twice for the Ghosts.

After Wiss drew even on a goal by Arthur Pounds (Daniel Hussa, Griffin Lynch assists), Abington went in front for good late in the first on a power-play goal by Patrick Stelacio. Again, Joe Stelacio and Kramer helped set things up.

Abington’s special teams were instrumental in the win: along with the power play, the penalty kill worked wonderfully, including on a five-on-three opportunity for the Trojans in the second.

“Probably the most important part of our game tonight was the penalty kill,” Brzozowski said. “We absolutely shut them down.”

Wiss goalie Michael Bonanni makes a save for the Trojans in their game with Abington on Thursday, March 3, 2022. Kev Hunter/ MediaNews Group)

There was no scoring in the third, but heroes kept emerging for the Ghosts.

Said Brzozowski: “(We had) Matt Kramer laying himself out to knock the puck off their stick…Pat Stelacio moving back on defense on our penalty kill..Joe (Stelacio) on both ends of the ice, offense and defense and taking his responsibilities.”