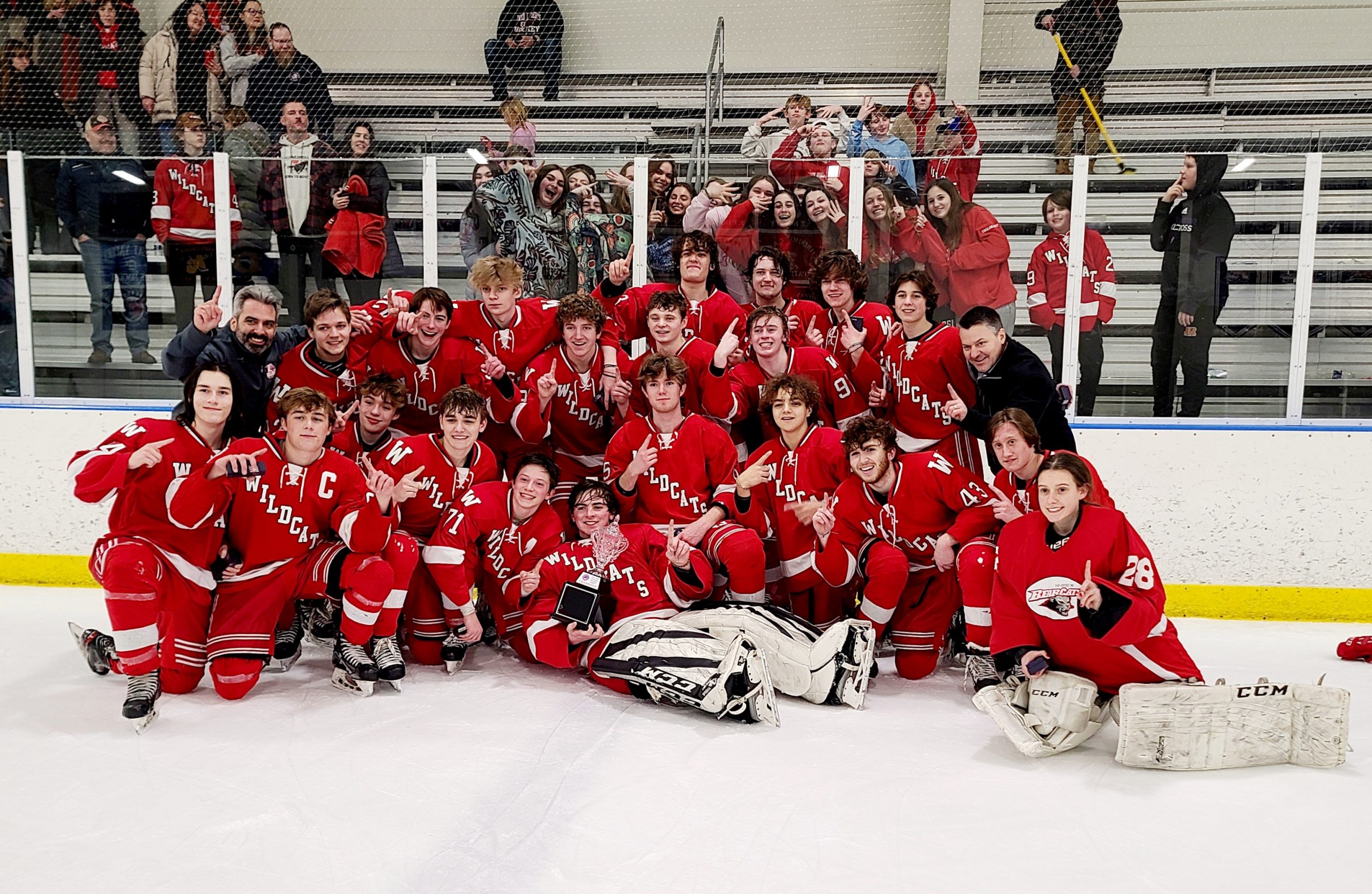 WEST GOSHEN >> In their two regular season meetings, the Owen J. Roberts ice hockey team got itself up early on Perkiomen Valley both times but never managed to finish the job.

So with the Wildcats trailing by two goals in the second period to the No. 1 seeded Vikings in Thursday night’s ICSHL Pioneer Division championship, things could have looked bleak.

Or maybe they were right where the Wildcats wanted it to write a great underdog story.

Just as major ended but the damage has been done pic.twitter.com/2f6hJNHkgt

“It feels absolutely amazing,” said OJR captain Nathan McDonald, a senior defenseman. “Everybody in the locker room is happy because it’s what we’ve been working for all year. We finally achieved it.”

OJR (9-4) is atop the Pioneer for the first time since 2018 when its team combined with Phoenixville, meaning this was the first trophy taste for any current player.

“For us seniors, four years of work finally pays off. It feels great,” Kavanagh said. “Most of us have been playing together for years so there’s a lot of trust in each other that we could come together and pull it through. The confidence we have in working together definitely helped us pull through, especially because we got down early. Coming back felt great.”

The architect of the comeback – and all their goals, really – was Davis. The junior forward was the star of the game with his team’s first three goals to go with assists on OJR’s tying and winning goals scored by Riley Vitullo and Kavanagh before an empty netter by Gavin Schultz sealed it with 0:18 to play.

“Best finisher in the PAC. If you give him an opportunity, he’s not going to miss it,” McDonald said of Davis.

OJR’s Charlie Davis celebrates after scoring a third-period goal against Perk Valley in the Pioneer final.

“I’ve got great guys around me feeding me the puck,” said Davis, who upped his season totals to a PAC-best 21 goals and 19 assists. “It’s that motivation you find in a playoff game like that and you can get it done with the guys around you.”

The night seemed to be setting up for a Perk Valley coronation, the cap of a journey from losing last year’s final to Spring-Ford 3-2 in overtime to reclaiming the Pioneer crown after winning the title in 2020. They’d vanquished archrival Spring-Ford 4-0 in the semifinals and were on their way in the title game.

The Wildcats had little interest in being Finland in the 1980 Olympics (a gold-medal game footnote, for the uninitiated).

PV led 1-0 after one period on a breakaway goal from sophomore Dax Nguyen, who had a goal and two assists. Davis gave OJR a charge and managed to level the contest twice, PV’s scoring standout Jonathan Waters, a junior forward and the team’s captain, earned his team a 3-2 lead through two periods on his second goal that came just 29 seconds after Davis tied the game with 3:56 left in the second.

The Wildcats started the third brightly when Trevor Gorman assisted Davis’ third goal at the 16:21 mark.

Freshman Mason McCabe, who only joined the team three games into the season, got the Vikings the lead back with 12:12 to play.

The game turned on its head with 7:08 remaining when PV senior Chris Cowgill, who was the goalie on the 2020 title team, received a five-minute major and game misconduct for head contact, giving the Wildcats a serious opening despite trailing 4-3.

“Whenever you go on the kill like that, we try to look at it like a momentum-changer,” said Perk Valley coach Elliot Sitron. “If you can kill that five minutes that would’ve been huge, would have locked things up.

“We talked about setting a tone early and getting on the scoreboard first. It was working to our advantage most of the game. I think everybody was feeling really confident. PV is always a good third-period team so we were looking forward to it. But that five-minute penalty really hurt.”

OJR made the most of the huge momentum swing and tied it at 4-4 when Vitullo redirected a Davis shot from the point with 3:51 to play.

That set up Davis and Kavanagh’s heroics with 2:00 to play, just as PV returned to full strength but with the damage already done.

“The (PV) kid went into the corner and there was a rough spot on the ice and he fumbled it,” Davis said. “I got it, turned around and surveyed my options and (Kavanagh) is on his left side, perfect, pass to his forehand and I see the left side of the net and he sticks it there. And I go nuts. Awesome goal.”

“I was at the blue line and I saw him fumble it. There was no one between me and the goal and I saw my opportunity,” said Kavanagh. “I saw Charlie get the puck – and he don’t miss, best player in the PAC, MVP – and he feeds a perfect pass right on my sweet spot. He knows perfectly where I like it and the net was wide open. I had my spot picked and I was ready to go.”

While Perk Valley was the one-loss team and top seed entering Thursday, it was not the juggernaut that might indicate. The Vikings began the year short on numbers – the roster is filled out with a few Methacton student-athletes, which is why they aren’t eligible for the Flyers Cup.

“It’s a phenomenal group. There was never any conflict in the locker room, practices were already great,” said Sitron. “I would say they exceeded expectations. We had short numbers at the beginning of the season and Mason McCabe, who is a freshman, came out and he made a huge difference. The whole bunch, they’re awesome.”

Owen J. Roberts qualified for the Flyers Cup AA field and is the No. 13 seed. They’ll face No. 4 Pennsbury at Hatfield (Blue) at 6 p.m. on March 8.

So a dramatic late win like Thursday’s wasn’t out of the realm of possibility.

“It’s been like that all year: a rollercoaster,” said Gorman.

Call it what you want: a rollercoaster, an underdog story. But be sure to call the Wildcats champions while you’re at it.

NOTES >> Also credited with assists for PV were Chris Cowgill,  Andrew Cowgill and McCabe; for OJR, Kavanagh, Joseph Bacallao and Gorman had helpers.