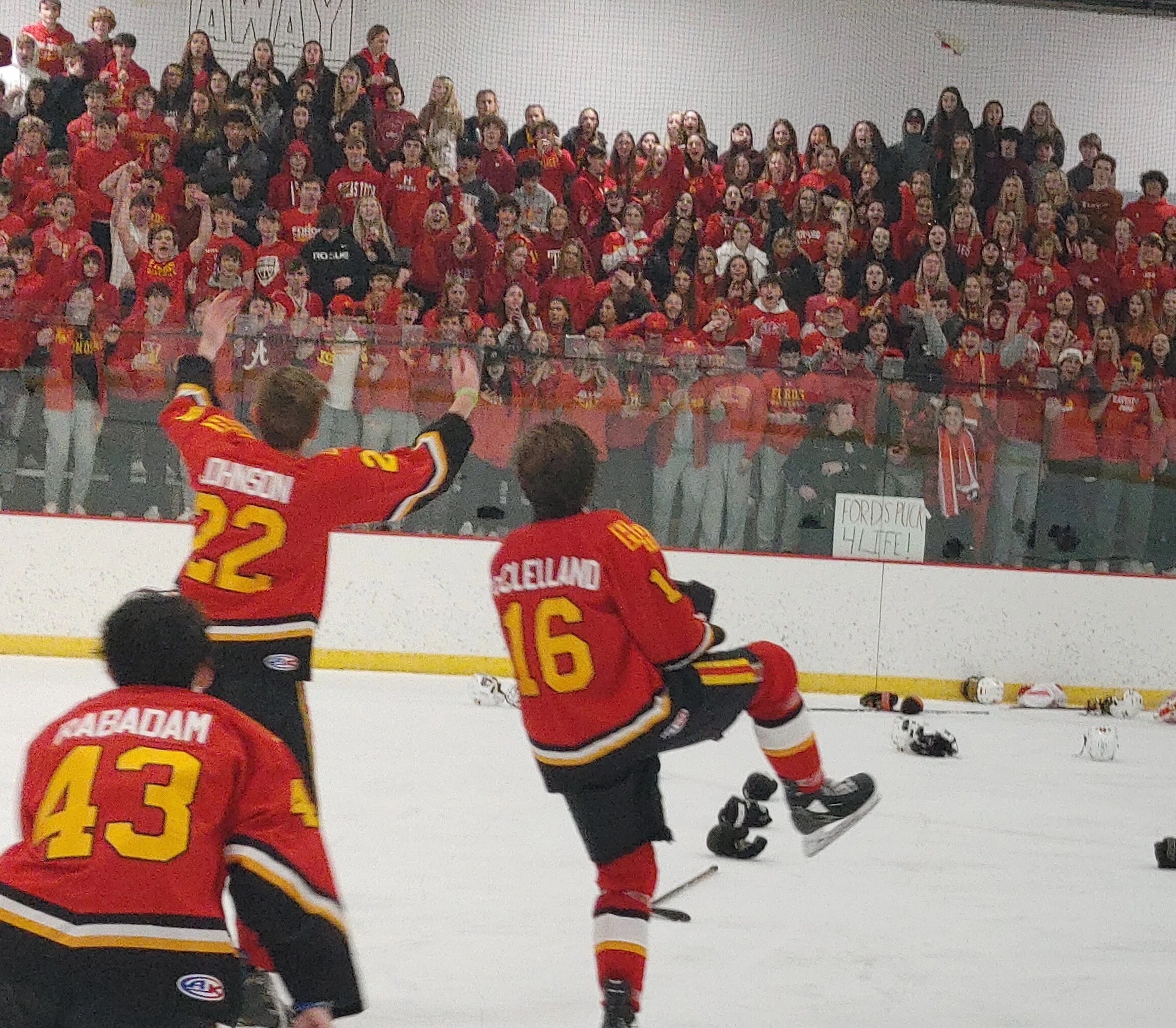 HAVERFORD —There’s a reason why Jagur McClelland is the best player in Delaware County.

When the pressure mounts, he leads his team to championships.

The Haverford High senior and reigning Daily Times Player of the Year delivered down the stretch in the ICSHL Central final against rival Springfield Thursday at the Skatium. McClelland netted the tying and winning goals, propelling the Fords to their second straight Central trophy.

The Fords and Cougars have played for the league title in each of the past three seasons.

“The past three years now, it’s been the finals every single year. It’s a battle every single time,” McClelland said. “I think both teams respect each other, which is the best part about it. I have so many emotions right now. It’s a great feeling. To beat our rivals, I mean, they respect us and we respect them. It was a great game and I think everybody here didn’t expect any less.”

After Zach Cain’s goal put Springfield in front 2-1 with 14:19 to play, the Fords knew they had to find an extra gear. This wasn’t the 11-1 Haverford drubbing of a year ago, this was a clash to the very end. The Fords got a power- play opportunity (the only one for both teams all game), but couldn’t get the equalizer.

McClelland used his amazing speed to create the tying goal. He received a pass from Nate Rabadam around the blue line and sent a laser high and past the glove of Springfield goalie Tyler Philiposian to tie the game with 4:42 left.

Less than a minute later, McClelland unleashed a similar shot and scored the go-ahead tally on an assist by Ryan McGlade.

“I’d be lying if I said I wasn’t nervous,” McClelland said. “When we were down I just said to myself, ‘Make it simple.’ Everything I do, just get the puck and throw it on net. Beat the guy wide, put it in deep, try to chip away during the game and once I got one in it was kind of a relief. I just stuck to that game plan, keeping it simple.”

Haverford coach John Povey didn’t expect anything else from his captain with the game on the line.

“I’ve been saying it for a while, but Jagur I feel he’s the best player in the league and four him to come in with two goals in the last five minutes and win it for us, it’s what makes him a special player,” Povey said.

The Fords were kept afloat thanks to the outstanding goaltending of Jai Jani, who saved 35 of the 37 shots he faced. Springfield dominated time of possession in the first period and Jani thwarted several clean shots.

“He’s been phenomenal,” Povey said. “He’s now a two-time Central League champion and he’s a Flyers Cup champion. Have we had good teams in front of them? Absolutely. But we’re not where we are at without him.”

The Fords will begin their Flyers Cup Class AA defense next week.

McClelland assisted on Quinn Carson’s goal in the second period to put Haverford up 1-0. Seconds later Springfield evened the score on a goal by Devin DeStefano.