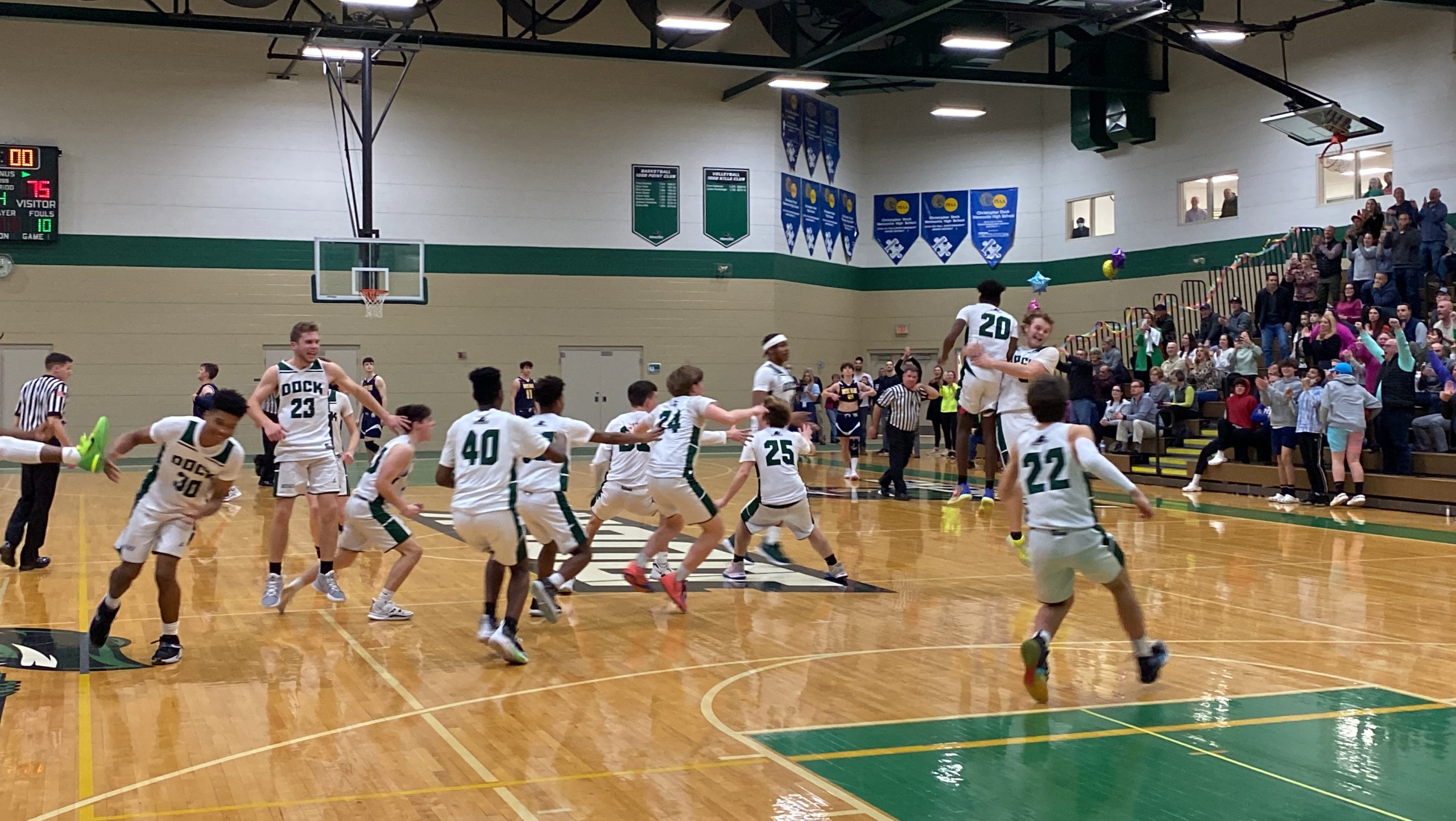 TOWAMENCIN >> Tomir Johnson had seven seconds and the full length of the court to figure out how to keep the Dock Mennonite boys basketball team’s hopes for a District 1/11 Class 3A title alive.

“The way Coach drew it up, he wanted me to come off the staggered screen and he told me once you get it just go and hit the shot,” the Pioneers senior guard said.

With second-seeded Dock trailing visiting No. 3 Notre Dame-Green Pond 66-63 in the final moment of overtime Wednesday night, Johnson took the inbounds pass and raced down the right sideline, slicing between a pair of defenders to get to the wing and drain a 3-pointer before the buzzer to send the game to second extra session.

“It’s ice water in his veins, man,” Pioneers coach Mike Fergus said. “I’m not surprised. He’s dangerous in situations like that. He just knocked it in.”

In a tight second overtime, Hoyt Bultje’s two free throws with 55 seconds left put Dock up 73-72 with a Johnson steal leading to Vaughan Martin’s hitting two from the line for a three-point edge and the Pioneers held on from there to outlast the Crusaders for a memorable 78-75 victory.

“That was a great high school basketball game,” Fergus said. “Hats off to Notre Dame, they battled we battled it was like two heavyweights fighting. It was just trading punches.”

Bultje scored 16 of his 18 points after halftime, connecting on a floater in the lane late in regulation to tie the contest at 56 as Dock rallied from a nine-point deficit in the fourth quarter to force OT.

Nathan Lapp had a team-high 21 points – collecting Dock’s first 14 points – before fouling out with 4:30 in the fourth while Johnson added 12 points as the Pioneers clinched its fourth PIAA Tournament berth in six seasons.

“They thought it was over but I still knew we still had a chance,” Bultje said. “Cause Nate’s not the only guy who controls the offense. We got guys off the bench who can step in.”

Sean Howlett scored a game-high 25 points for Notre Dame (18-7), which takes on Palmerton in the third place game 1:30 p.m. Saturday at Southern Lehigh with just the winner earning a spot in states.

Kutztown commit Brendan Boyle, who played through a fractured left hand suffered in early February, totaled 23 points before leaving the game and not returning due to a leg issue at 2:39 in double overtime. Lucas Altmire chipped in 12 points.

Notre Dame led 49-45 in the fourth quarter and after Lapp picked up his fifth foul on a charge at 4:30, the Crusaders extended their advantage to 54-45 with 3:44 left on a Howlett basket and a Boyle 3-pointer.

After the Crusaders missed the front end of a 1-and-1 with 71 seconds to go, Johnson found Bultje for a basket inside to make it 54-51. Dock’s pressure forced a backcourt turnover, giving them back the ball with 43 seconds.

“When Nate fouled out, I was just like all right time to put on your big boy boots, let’s go to work and step up,” Johnson said. “And I was telling my guys, I was like just because Nate went out does not mean y’all need to hold y’alls heads down, y’all got all step up and we got to play the game that we know how to play.

“I didn’t think we were going to lose that game. Not one second of that game.”

Tony Martin was fouled at 36 seconds and hit one of two from the line. Boyle, ND’s all-time leading scorer, converted both ends of a 1-and-1 five second later for a 56-52 Crusaders lead but a Tony Martin basket had Dock back within two.

With 20 seconds to go, ND could not hit the front end of a 1-and-1 and Bultje pulled Dock level – taking a bounce pass from Tony Martin and dropping in his floater in the lane. Notre Dame pushed down the court for the winner but Howlett’s shot was off-target.

“I think I set a screen, which was supposed to get us a three ball for the win but ends up ball in my hands,” Bultje said. “I don’t want to put it on the floor cause it’s got the little guards – I got them in practice  every day coming for me – so practice that floater a lot, it’s one of my favorite shots so knew there wasn’t much time left, had to put it up.”

A Howlett free throw at 2:45 broke a 58-58 tie in the first overtime with Boyle scoring on a drive to give the Crusaders a three-point lead. Bultje’s basket had Dock down 61-60 but with 32 seconds left Howell hit two from the line put ND back up three.

With less than 30 seconds left, Zach Neff banked in a 3-pointer from the top of the arc off a Johnson assist but Boyle answered by burying a trey from the left wing for a 66-63 Notre Dame lead.

Dock Mennonite, however, had seven seconds left and Johnson dashed to the 3-point line to beat the buzzer for an additional four minutes.

A Dainn Vassallo 3-point play at 3:17 then a free throw by Chase Marcks – shooting for Boyle, who went down after he was fouled at 2:39 and did not return – had the Crusaders up 70-68 in double OT but Johnson hit a tough jumper to tie the game.

Dock’s Lane Bergey was fouled trying to corral an offensive rebound at 1:58 and hit the front end of his 1-and-1 to make it 71-70.

An Altmire reverse layup put ND back ahead a point but with 55 seconds left Bultje hit two from the line. Johnson then came from behind in the backcourt to knock the ball free for a steal. The Pioneers almost turned it over but Bultje made a leaping baseline save and Dock called a time out with 43 seconds.

Notre Dame forced a jump ball at 33 seconds but possession stayed with the Pioneers. Vaughan Martin was fouled at 28 seconds and connected on both free throws for a 75-72 Dock lead.

Howlett was fouled driving to the basket five seconds later and hit his pair from the line. With 19 seconds, Bergey made the first of two free throws – giving Notre Dame a chance to tie or take the lead but Howlett could not connect on his pull-up jumper for two.

Neff was fouled with eight seconds remaining, missed his first free throw but made the second for a 77-74 edge. Dock fouled Howlett at five seconds – Howlett converted the first at the line but trying to intentionally miss the second was called for a lane violation.

After a Johnson free throw with four seconds left, Howlett was fouled with two seconds and missed both – the second intentionally only for Bultje to grab the rebound to start Dock’s celebration.

Lapp was the Pioneers’ only offense for a while early, scoring the home side’s first 14 points before a Bultje basket had Dock leading 16-14 after the opening quarter.

“He scores in bunches and he’s our energy guy,” said Fergus o Lapp. “And he usually doesn’t foul out but just the way we responded I was just proud, really proud of our guys.”

A Tony Martin basket had the Pioneers up 25-24 but Notre Dame collected the last six points of the half – a Howlett fast-break layup off a Colin Boyle steal giving ND a 30-25 lead at the break.

Dock began the third with 10 straight points to go up 35-30 after two Bergey free throws at 5:50. But Notre Dame ended the quarter with a 14-6 run, a Brendan Boyle jumper sending the Crusaders to the fourth leading 44-41.