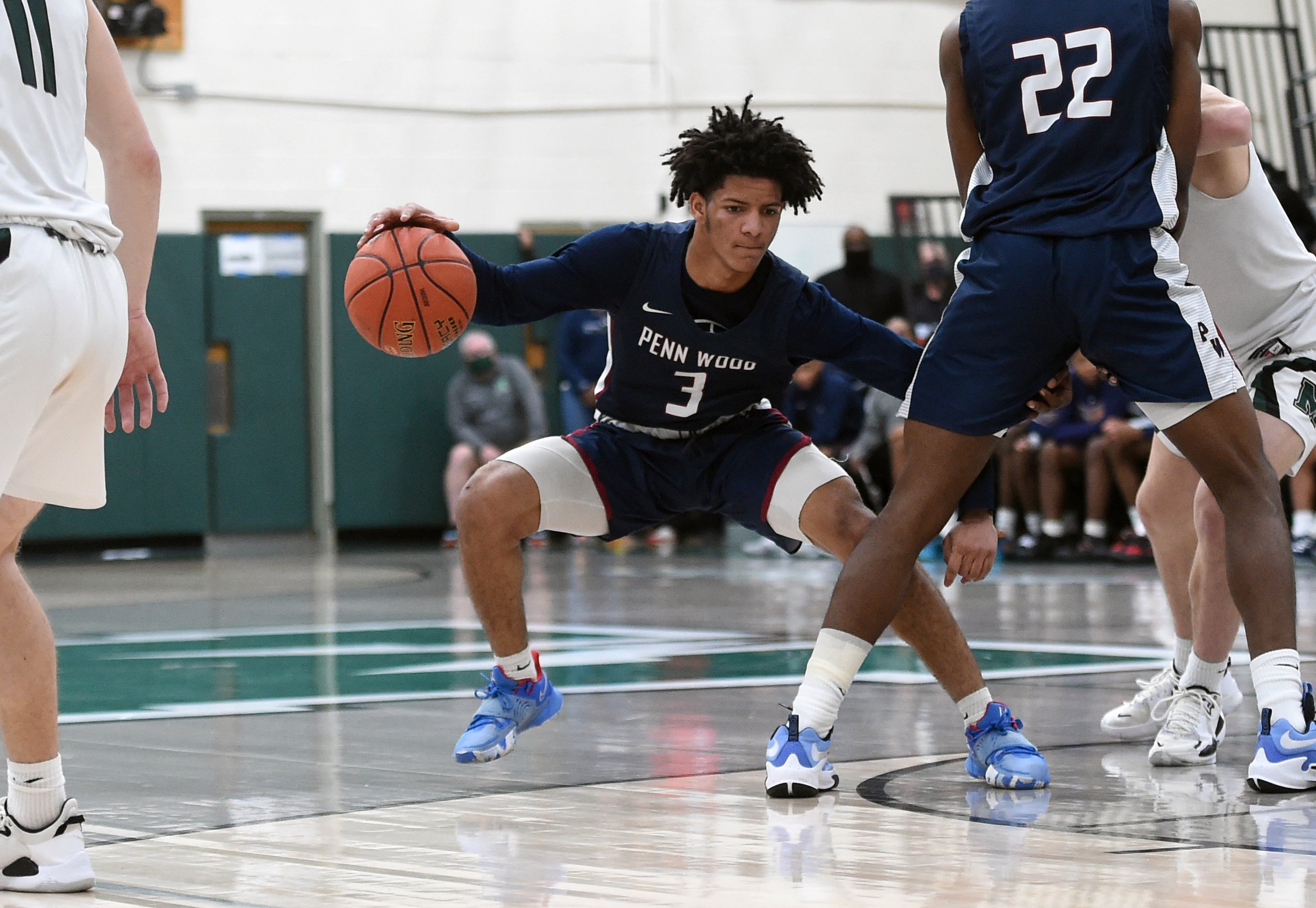 Penn Wood’s Anthony Murray dribbles in traffic against Methacton during a District 1-6A second round game at Methacton on Tuesday night. (Owen McCue - MediaNews Group)

HAVERFORD — The game was tied with a shade under a minute to go Tuesday when Anthony Murray drove the right side of the basket.

The Penn Wood guard couldn’t decide which move to use against the Haverford defense. Unfortunately, he was too far from the basket to try the Euro Step and much too elevated to slam on the brakes.

On this night the turnover wouldn’t be a problem because the Patriots got a stop and with 14.4 ticks left, Murray matched a go-ahead free throw by teammate Sahmir Massenburg to defeat the hard-charging Fords, 50-46, in the District 1 Class 6A playback round.

“I wanted to shoot but at the last moment I didn’t,” said Murray, who led the Patriots with a dozen points. “But I made up for it. One good play, one bad play.”

It was a lot of good plays for Murray and the Patriots (15-7), who have won back-to-back games in the playback round.

A few days ago, Penn Wood registered a 40-38 double-overtime victory over Spring-Ford in an elimination game. Patriots coach Matt Lindeman can use these close victories to build confidence on his team, which isn’t playing like a 17th seed. Watching Murray, a sophomore, step up late in the contest put a smile on the face of Lindeman.

“He’s the heart of our team,” Lindeman said. “He’s a young kid. He makes some young mistakes at times. But he’s really good and when we need big plays, he’s usually the one who wants to make them. He’s really important for us. We’re proud that he’s starting to mature and growing into his role. He made a couple of big plays when we needed him.”

Murray also was part of a concerted defensive effort to keep three-point sniper Googie Seidman from lighting up the Patriots as he had so many teams.

The Fords (16-5) weren’t playing the tempo they preferred in the first half and worse, weren’t spreading the floor the way they have when the outside-in game is working to perfection. Seidman had just two treys in the first half. Not coincidentally the Fords trailed, 28-18, at the intermission.

“Don’t let the shooters shoot,” is the way Murray described the Patriot game plan. “He hit a couple shots. We knew he was going to get a couple shots but not more than five. Last game he had 24 points. So, it was just like, take him out of the game and play our game.”

Seidman finished with 12 points on four three-pointers before fouling out, the last foul coming while trying to strip Murray. With a one-point lead, Murray calmly sank the first of two freebies, and seconds later, the Fords missed a shot that could have tied the game.

The Fords knotted the game twice in the final frame, Kevin Gannon making it 46-46 with a three-pointer with 24 ticks remaining. They just couldn’t get over the hump.

“We didn’t make enough plays,” Fords coach Keith Heinerichs said. “In the first half, we just weren’t running to the right spots. Our spacing wasn’t good. We weren’t getting our shots. Once our spacing improved we got better shots and we were fine. That was frustrating because we talked about it a lot, but we didn’t do it the way we wanted to in the first half. These games are tough, the playback games and the mindset. I thought both teams played pretty well. It came down to the wire and the ball fell their way on that offensive rebound and we didn’t get it. That’s the way it goes.”

The Patriots completed the scoring on a buzzer-beating runout by Evan Borward. They’re playing for ninth in the playbacks, and on Friday oppose the winner of the Tuesday playback between Downingtown West (sixth seed) and West Chester East (seventh seed).

The Fords also play Friday, albeit for 11th place. But they host the loser of the above game.

At practice this week Lindeman can point to the way the Patriots executed their defense and made clutch free throws as rallying points.

“Last game we missed a ton of free throws,” Lindeman said of the win over Spring-Ford. “We were due to make a couple tonight. I was having flashbacks to the other night. There was a little less pressure tonight. Even though it’s a good team we both were in states already. It’s not like that threat of season over or not. Haverford is really good and they’re really hard to play because they have so many guards that can shoot it. We were just trying to take their best players away as best we could. You saw late they started hitting shots. I think we just made one more play than them tonight. But they’re a hard team to play against.”

The Fords, on the other hand, can check out their ball movement and spacing while watching the replay of the setback. Heinerichs will have no problem with the upcoming pep talk.

“Just go have fun and play basketball,” Heinerichs said. “We just turned the ball over too much in the first half. I think we had six or seven in the first half that led to at least eight to 10 points for them. And that’s the difference in the game.”