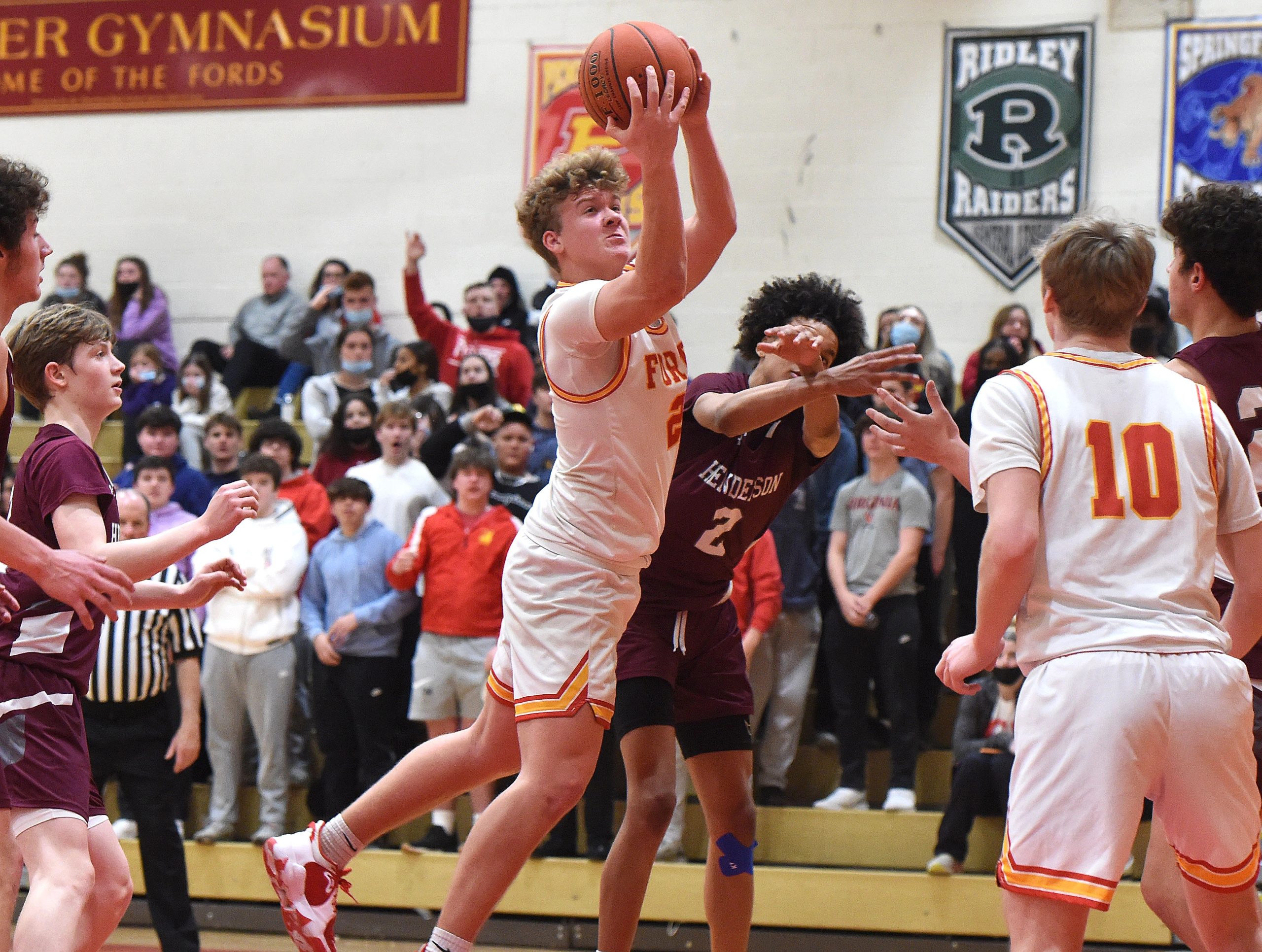 Haverford's Tommy Wright, left, falls forward as he shoots in the second half of the Fords' victory over West Chester Henderson. (Pete Bannan - MediaNews Group).

HAVERFORD — He could have settled for a verbal outline. He had the option to pick up the passion in his pre-game speech. He might have mixed in an additional film. He might have tried it all, given the straits his Haverford High basketball team would wander into Friday night.

Fords coach Keith Heinerichs, however, took the message to another level. And that would have been him, out there Thursday, running pre-practice sprints with his players, maybe huffing, perhaps puffing, but shouting out the reality with each determined stride: Lose the next one to visiting West Chester Henderson, and it’s over.

“I was just trying to get the intensity up,” said the Fords’ coach. “I wanted to make sure they wanted it.

“It wasn’t the first time I did that,” he continued, smiling. “But it was the first in a lonnnnnnggg time.”

Haverford’s J.R. Newman, right, shoots around Henderson’s Dylan Grim in the second half of a Fords victory Friday night which clinched a spot in the PIAA Class 6A tournament. (PETE BANNAN- DAILY TIMES)

By the time the Fords outpaced the Warriors, 63-41, in the playback round of the PIAA District 1 Class 6A tournament, it was clear Heinerichs’ ploy didn’t hurt. Though young Henderson hung around early, the Fords gave them 32 minutes of relentless defensive pressure to improve to 18-6 and win a spot in the state tournament.

As for their seeding, that will be determined beginning Tuesday against visiting Penn Wood, when, for a round at least, there will not be that win-or-perish pressure.

“That was big for us,” said slashing forward JR Newman, who scored a game-high 18 points. “We knew this was winner-take-all. If we win, we move onto the state tournament. If we lose, our season is over. We didn’t want our season to be over, so we had to come out with the energy we needed to win.”

As the No. 5 seed in the district, Haverford was a bit shocked to even be in that predicament Friday after falling, 46-39, to 12th-seeded Norristown in the previous round.

As much as the Fords are aware that a season can end at any time, they knew they had too strong a team for that reality to strike so quickly.

“We played with that in mind Tuesday, but we didn’t have any attack,” Heinerichs said. “I don’t want to make any excuses, but we weren’t at our best. We had a couple of guys sick and Norristown really wore us down physically. I think it woke everybody up.”

So did Heinerichs’ next-day act.

With Henderson opting for a slow-down approach, the Fords needed Brian Wiener’s buzzer-beating three-pointer to secure a 17-11 lead after the first quarter. So inspired, they kept the momentum, taking a 35-22 lead into the half.

The Warriors, however, were in no mood to have their season end, either, and were able to trim a 44-27 third-quarter deficit to 44-33 late in the third. That’s when the Fords stretched their defense and showed why they deserved that No. 5 seed.

“They are a very good team,” Warriors coach Rob Frattura said. “They had a tough match with Norristown. We’re a little younger than them, with some sophomores playing a lot of minutes. And I hope they learned from playing a hard-nosed team like that. That’s how a good basketball team plays.”

Among the intriguing sophs is Connor Fleet, who scored 11 points, and Nyle Ralph-Beyer, who chipped in with four. Soph Nelson Lamizana was injured, according to Frattura, and did not play Friday as the Warriors completed a 16-9 season.

“So I’m very excited about the next couple of years,” Frattura said. “But you can’t teach what Haverford does. They are not taught that. They just have it. They are just tough kids. You can tell when the ball is on the floor, they want it.”

By the fourth quarter, the Fords were in control, a Colin Reynolds breakaway layup inflating a lead to 56-37 and inspiring a final Henderson timeout. But Googie Seidman, who scored 10 of his 11 points in the first quarter, had sizzled enough early, Wiener was chipping in with 10 points, and Newman would execute with supreme efficiency around the basket late.

“The last game, we didn’t play with urgency,” Newman said. “But we played with urgency tonight and we got the job done. And I think we can beat any team as long as we play at our best.”