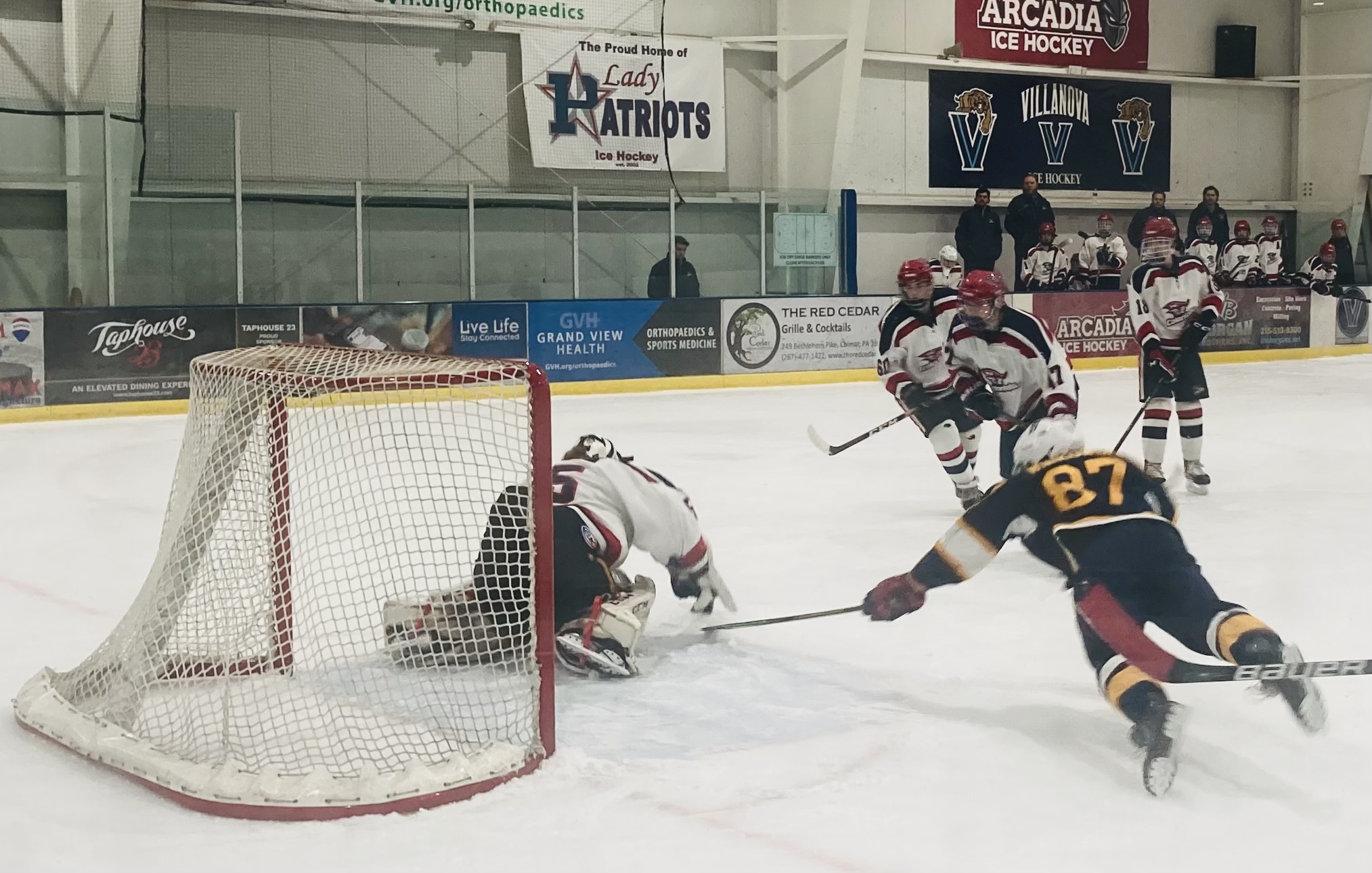 A diving Matt Winkowski of Wiss tries to get a shot past PW goalie Kolton Galie during their playoff game on Thursday, Feb. 24, 2022. (Kev Hunter/MediaNews Group)

“We played a defensive game. That’s how you beat these teams in this league – you have to play defense. We learned that throughout the season,” said the Trojans’ Nicholas Hussa. “We were getting scored on a lot and had to switch it up and play team defense.

“We tried to match their lines the whole game. And it worked out for us.”

The victory advanced the Trojans to Thursday’s final against Abington, back at Hatfield Ice at 8:30 p.m.

“We lost to them earlier in the season by one goal and we took that personally,” Hussa said of the regular-season split with the Colonials. “We wanted to play defense on them every time and make sure that didn’t happen again.”

Wiss kept PW off the board early and got that initial jump.

Ty Schiff scored less than seven minutes in, off an assist from Hussa, and the Trojans were up 1-0.

Schiff then set up William Hussa for a 2-0 advantage.

After the Colonials closed out the first with a goal by Luke Weikel (Aidan Keogh), Nicholas Hussa broke free and scored unassisted to widen the gap to 3-1 Trojans.

Kolton Galie of PW makes a stop during the playoff game with Wissahickon on Thursday, Feb. 24, 2022. Kev Hunter, MediaNews.

The two teams would split the final six goals, but Wiss maintained at least a two-goal edge for most of the way.

Said coach Ken Harrington: “We kept bouncing back. We’ve been turning it on lately and playing more as a team.”

Weikel scored for the Colonials (Dylan Novitski assist) before Wiss ran its lead to 5-2, thanks to tallies by Matt Winkowski (Griffin Lynch assist) and William Hussa (Hudson Honeycutt assist).

After Weikel set up Tim Murphy for PW to make it 5-3 after two periods, Wiss gained more breathing room on an Arthur Pounds-to-Nicholas Hussa connection, pushing it to 6-3.

The Colonials closed out the scoring with a goal by Isaac Mishkin (Weikel assist).

Michael Bonanni got the win in net for the Trojans, making 32 saves. Kolton Galie made 37 stop for the Colonials.

“I think we’re ready,” Nicholas Hussa said of the showdown with the Ghosts. “They got us by one goal in the outdoor game. We should have had them – we outshot them. We’ll see what happens Thursday. On Monday we’ll get back to practice. The job’s not finished – we gotta get back to work.”

Abington starts fast, advances past Quakertown in SHSHL American semifinals
Cheltenham turns it on in 3rd quarter, pulls away from Plymouth Whitemarsh in District 1-6A quarterfinals