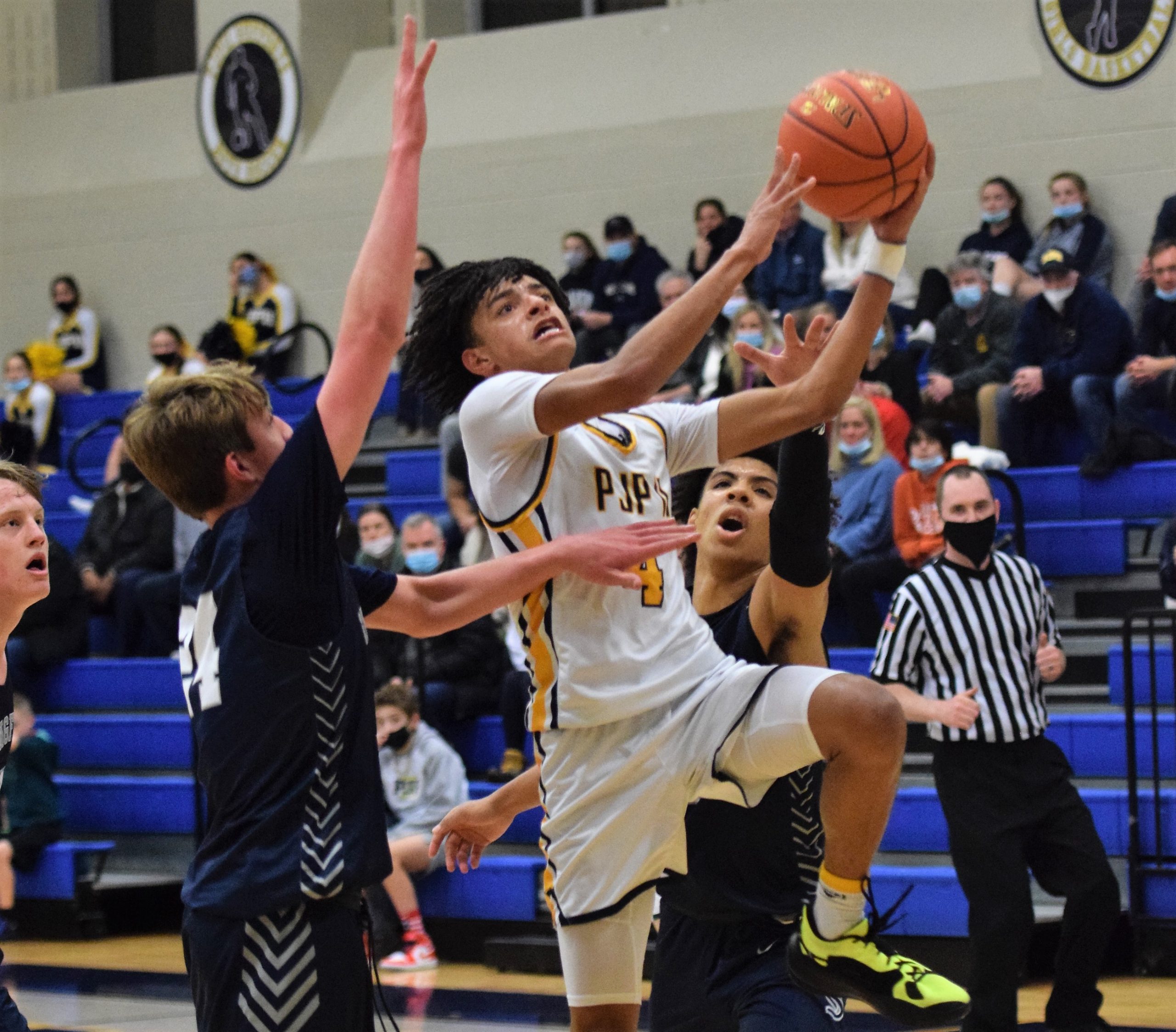 UPPER PROVIDENCE >> What was once a 12-point Pope John Paul II lead dwindled to just one late in Tuesday night’s District 1-4A boys basketball semifinal. But Jaden Workman and J.P. Baron helped the Golden Panthers get back on track for a 51-43 win over visiting Springfield Township.

PJP (14-8), the second seed, will try for its third straight district title Saturday at 4 p.m. at Harriton High School against No. 1 seed Collegium Charter, a 56-33 winner over New Hope-Solebury.

Workman scored 24, including a basket and two free throws after the Spartans (10-11) had pulled to within 44-43 with 3:15 remaining. Baron scored 14 and grabbed six rebounds and Kevin Green scored eight for PJP. Harry Rittenhouse had 10 points and 10 rebounds, Dylan McKenzie scored 10 and Ben Cooney contributed nine points and nine boards for Springfield.

“We just had to lock up on defense and get shots,” said Workman.

“In the fourth quarter when things got dicey, we moved the ball and got some good looks,”said Panther coach Brendan Stanton. “You’re lucky to have Jaden Workman and J.P. Baron out there for you.”

Pope John Paul opened its largest lead of the night at 39-27 with three minutes left in the third quarter, but the Spartans went on a 16-5 run that cut the deficit to one.

Then Workman scored on a drive, the Spartans missed a 3-point attempt and Baron rebounded and hit a jumper at the other end for a 48-43 advantage. Springfield missed two from the line on its next possession and Workman sank both ends of a one-and-one to wrap up the win with 38 seconds to go.

Springfield led 13-9 after a quarter and held its largest lead at 15-10 before PJP went on a 15-4 run for a 25-19 advantage at the half. Kyle Smythe hit a 3-pointer from the top of the circle as the visitors scored seven in a row to close to within 39-34 late in the third quarter.

Then after Baron sank three of three from the line early in the fourth for a 44-36 lead, Brett Smith banked in a turnaround jumper, Smythe knocked down a trey from the left wing and Rittenhouse scored off a pass from McKenzie to cut it to one.

“We just started forcing some quick shots,” said Workman. “They knocked down some shots and they cut the lead.”

“I think we sped up there,” said Stanton. “There was a lot of energy in the gym.”

But the Golden Panthers survived to once again move into the district final, the winner of which will advance to the PIAA Class 4A Tournament.

“It’s good to be back,” said Stanton. “The fourth in four years being in the district title, which is awesome for our seniors. They don’t know anything except being in the final.

“Collegium Charter (25-2) is a heck of a team. They definitely have some size. I’m expecting it to be a fun game.”

Workman shot 9-for-14 from the field and 5-for-5 from the line and pulled in six rebounds.

“We knew he’d have a pretty good match-up,” said Stanton. “We put him in some advantageous positions. He’s an awesome finisher.”

The Golden Panthers did not commit any turnovers in the second and third quarters and had just four in the game to the Spartans’ 12. Springfield had a 32-26 advantage on the boards.

“My seniors (Cooney, Rittenhouse and Smythe) have done everything for us, going from 0-12 to a potential district championship game” said Fusaro. “Dylan McKenzie has been our go-to. These guys have bought into the standards of the program. Our bench has been great too.”