Radnor holds off Upper Moreland in fourth, advances to District 1-5A semifinals 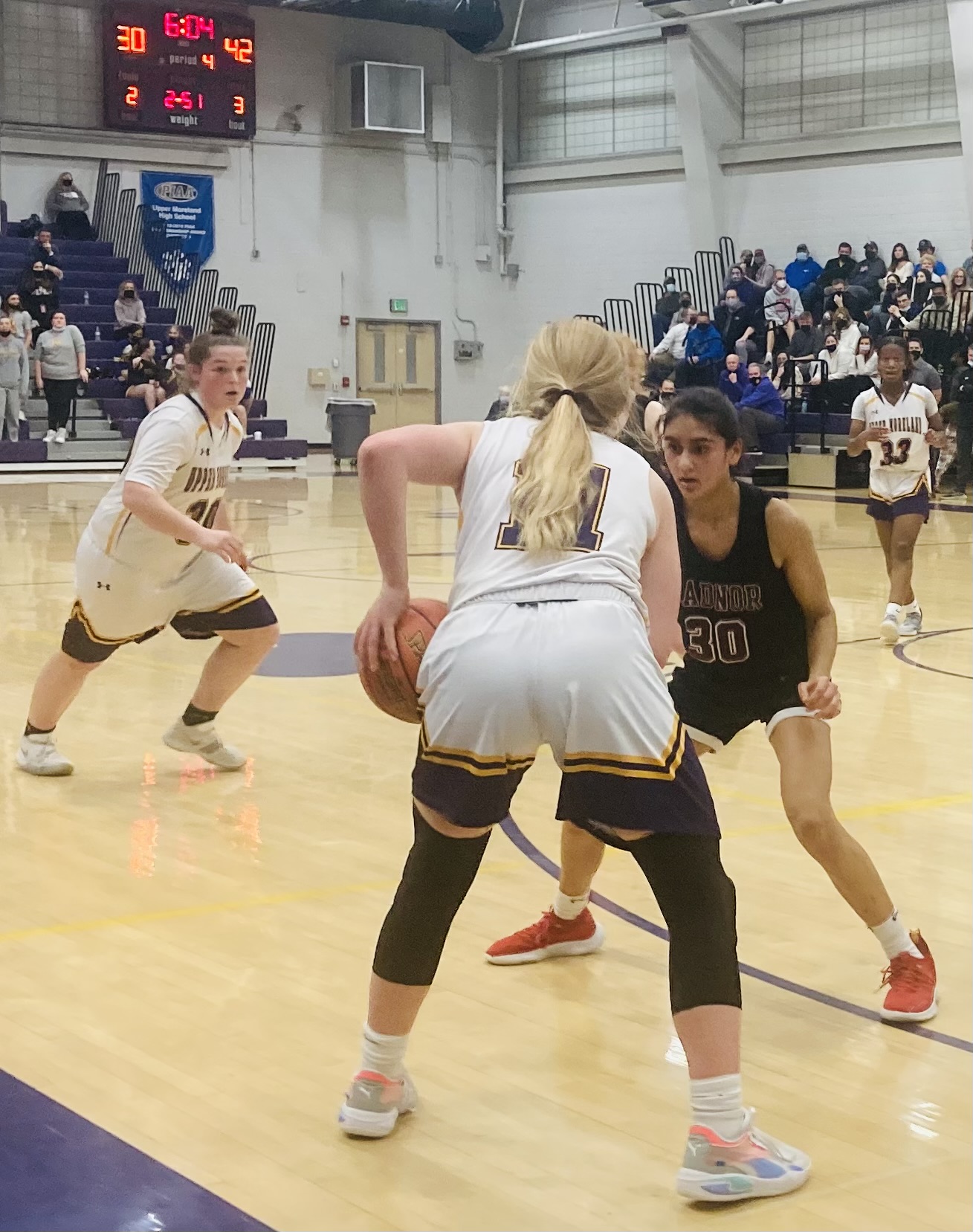 UPPER MORELAND >> On a day dubbed “Twosday,” it was only fitting there were two celebrations for the Radnor girls basketball team Tuesday night.

The first came with its thrilling 46-42 victory over Upper Moreland in the District Class 5A quarter, securing a spot in states. The second came just moments after when the Raptors learned that thanks to Villa Maria’s upset of Marple Newtown, they would be home for Friday’s semifinal contest.

“Amazing. We knew we had this game from the beginning but they scared us at the end,” Radnor’s Mary Sareen said of the Bears’ fourth-quarter comeback. “They scared us, but we pulled through. We kept playing hard. We never give up no matter what. Everyone comes through in their role and how they play. And we had no doubts it was our game.”

Sixth-seeded Radnor now gets ready for its home contest with No. 7 Villa Maria. The No. 3 Bears can still earn one of the five states spots, and will go into district playbacks Friday.

“I told the girls, our goals are not over,” Bears coach Matt Carroll said. “The only goal we can’t accomplish is to be district champs. We can still make it to states.”

The Bears came roaring back into the contest in the fourth, with a three by Kiera Coyle (10 points) pulling Upper Moreland to within 42-33 with 4 minutes, 33 seconds left.

The Bears started forcing turnovers and hitting big shots at the other end, with Mikel Lancit finding Holly Gohl underneath for two of her game-high 18 points, slicing it to 42-35.

The Bears got another stop, and then Coyle nailed another three, bringing the crowd to its feet and the score even tighter, to 42-38 with 2:40 to go.

A hook shot by Gohl made it 42-40 and Upper Moreland’s footsteps were getting closer.

“Keeping calm is very difficult but we were able to do it,” said Sareen.

Two free throws by Paige Yurchak provided Radnor some breathing room at 44-40 with 1:16 left. EmmyFaith Wood’s (12 points) pair at the other end made it a one-score game again, at 44-42 with 35 ticks left.

The Bears would have a chance in the final seconds, but Sareen got to a loose ball, was fouled, and went to the line with seven seconds left.

She calmly sank both shots, icing the game for the Raptors.

“I’ve had some foul shooting trouble recently, but I’m glad I made those two,” said Sareen, who had a team-high 14 points. “And Paige made her two. They all matter at the end.”

Radnor built a comfortable pad in the first half, with balanced scoring by Yurchak, Ava Gummel, Sareen and Ellie Davis producing a 32-18 advantage.

The Raptors led 40-29 after three and then braced for the fourth.

“Our strong first half really helped us out,” Sareen said. “When we don’t have to scramble around when we’re down, it’s much easier to play our game and play our pace. So it’s good we got the first-half lead.”

“I told the girls, whoever we play Friday is in the same boat,” Carroll said. “Whatever team is able to put (their loss on Tuesday) aside, practice hard Wednesday, watch film and get ready for Friday will probably be the winner.”