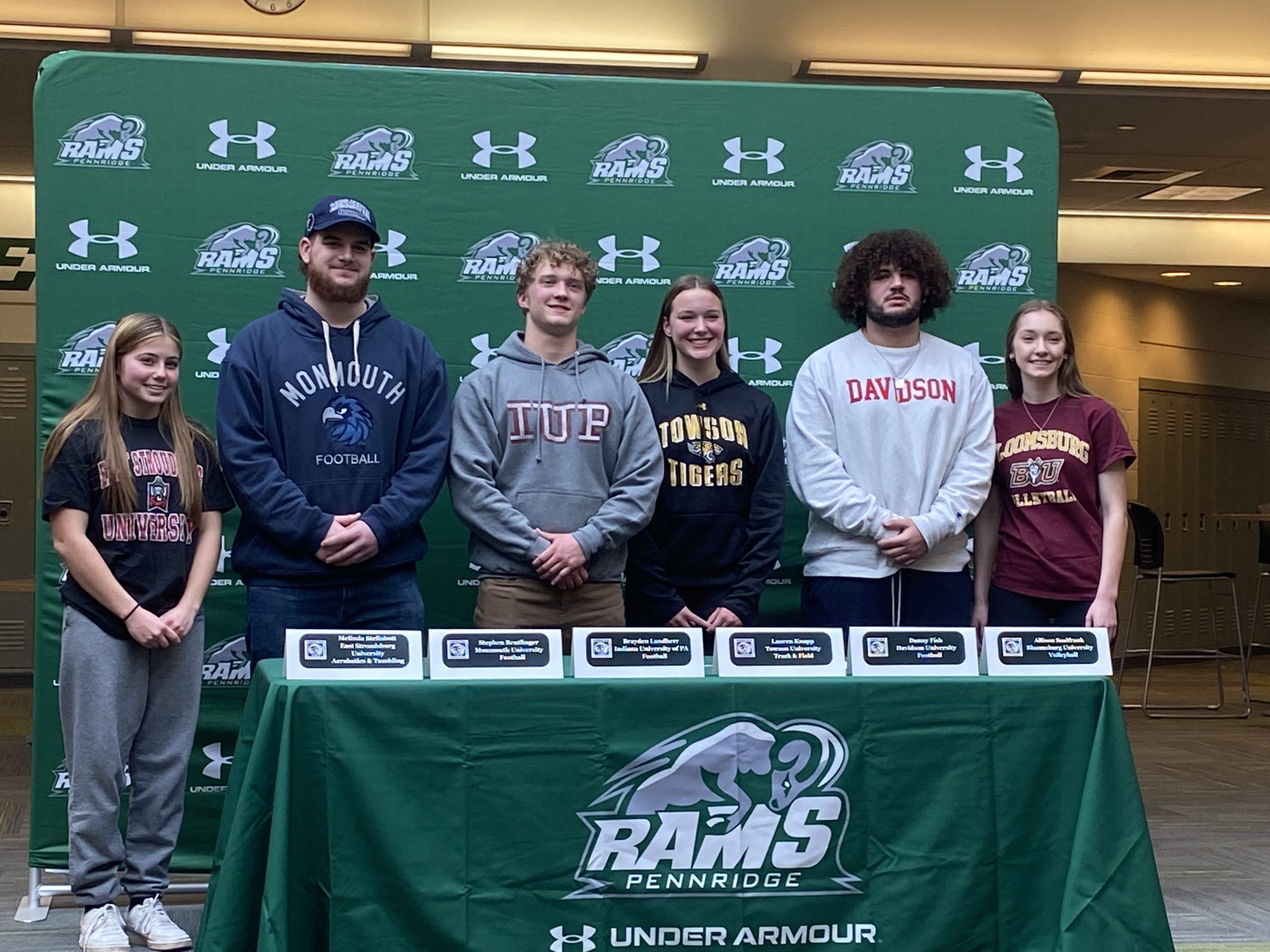 EAST ROCKHILL >> Brayden Landherr picked the skill of long snapping as a way of getting on the Pennridge varsity football team.

It is an ability that helped Landherr stand out on the recruiting scene and ultimately find a place at Indiana University of Pennsylvania.

Landherr was one of three football players and six Pennridge student-athletes honored for their college commitments Thursday afternoon at the high school.

Pole vaulter Lauren Knapp committed to Towson, Allison Saalfrank is set to play volleyball at Bloomsburg while Melinda Stellabott is heading to East Stroudsburg for acrobatics and tumbling.

Acrobatics and tumbling, a hybrid of gymnastics and cheerleading, is an NCAA emerging sport with the ESU team having its first season in 2022. Stellabott has competed in gymnastics for six years, taking up the sport after ice skating.

“West Chester has a club gymnastics (team) and I was thinking about doing that, maybe club sports at ESU,” she said. “I never thought of doing a DII sport.”

Stellabott is interested in Physical Education as a major.

“I just love sports so teaching sports I think is great,” she said.

Knapp was also a gymnast before getting a look at pole vaulting and deciding that the track and field event was for her.

“I was a Junior Olympic gymnast for nine years and I made it all the way up to Level Nine,” Knapp said. “And then I went out for the track team so I was getting a little too tall for gymnasts and I saw one of the girls pole vaulting and I was like ‘Oh my god I can do that, that’s exactly what I do now. So yeah I just saw it and I tried it and instantly it was my thing.”

“Through my club team, Philly Jumps Club, one of the older girls was jumping there already and I got the opportunity to practice with her a bunch when I was a freshman,” Knapp said. “And her and I really instantly clicked and when I was looking at schools she helped me connect to the coach and my coaches had obviously known her coach so it kind of just fell into place perfectly.”

Knapp, who took third at last season’s SOL Colonial Division Championships, fractured her tibia during a skiing trip to Italy in December but said she was cleared to go Monday and is out to better her personal best of 9 feet, 6 inches this spring.

Knapp is looking to study in Biology and Pre-Med majors, her interest in the medical field due to battling Scoliosis, having had to wear a brace from grades six through nine.

“I have Scoliosis and I was working with my team of doctors a lot, especially in middle school and I loved being there and all the med students came in too to look at my case and do a case study on me,” she said. “So instantly I clicked with them and it was just something as an athlete you’re always kind of hurt or you’re at the doctor and it’s just something that, I’ve always loved helping people so I think that that’s just the best way I can give back.”

Saalfrank was an All-Suburban One League Continental Conference first team selection at outside hitter in 2021 after earning all-conference honorable mention at setter as a junior in 2020. In college, she is set to play defensive specialist and libero.

Saalfrank, who intends to major in Early Education, was looking at a few other PSAC schools – Kutztown, Millersville, Shippensburg and East Stroudsburg – but realized Bloomsburg had what she was looking for.

“I’ve always wanted to continue my journey through volleyball and be at a good school with a good education program,” said Saalfrank, who also plays for Infinity Volleyball Academy. “And I think that Bloomsburg, it checks all of my boxes and I’m just really excited to get there and start playing.”

Fish, a two-time All-SOL National Conference selection at offensive line – second team as a junior in 2020, first team in 2021, also thought of attending West Chester but committed to Davidson, a North Carolina school known for its basketball alum Steph Curry but holds its own on the gridiron. The Wildcats won last season’s Pioneer Football League title and qualified for FCS tournament.

“So basically at the beginning of August I started to talk to the coach more and more,” Fish said.  “And throughout the season we were keeping tabs and sending him all my film stuff and after the final game then I sent him like the full year and they offered me. And then a couple months later I committed.”

Fish says playing center may be in his college future but is fine with any spot on the offensive line. Academically, he is interested in a Psychology major.

“I was really undeclared before coming into this year but then I took AP Psychology and realized that’s really interesting,” he said. “And just I could see myself doing that cause it’s something I find extremely interesting. So I’m definitely leaning towards that.”

Reutlinger Jr earned All-SOL National second-team honors at defensive line in 2021 after being named honorable mention at offensive line as a junior in 2020. He opted for Monmouth over St. Francis, Villanova and Bryant.

“My recruiting coach from Monmouth actually left and basically they got me in a contact with the d-line coach and I ended up just going back-and-forth texting him, trying to figure things out,” said Reutlinger Jr., who expects to play on the defensive line with the Hawks. “Couple days before my official visit I talked it over with my parents and over with the coach too, figuring out the situation and I just felt that was right.”

Reutlinger Jr plans to major in Accounting and is looking for a career in law enforcement.

Landherr was an all-conference first team pick at defensive back and also played running back for the Rams football team. An interest in a Finance major helped Landherr make his commitment to IUP.

“One of the things at IUP is a student managed portfolio where students in the school and the business program finance majors manage a portfolio of assets and all the profits they make go to scholarships,” he said. “And that’s something I want to be a part of.”