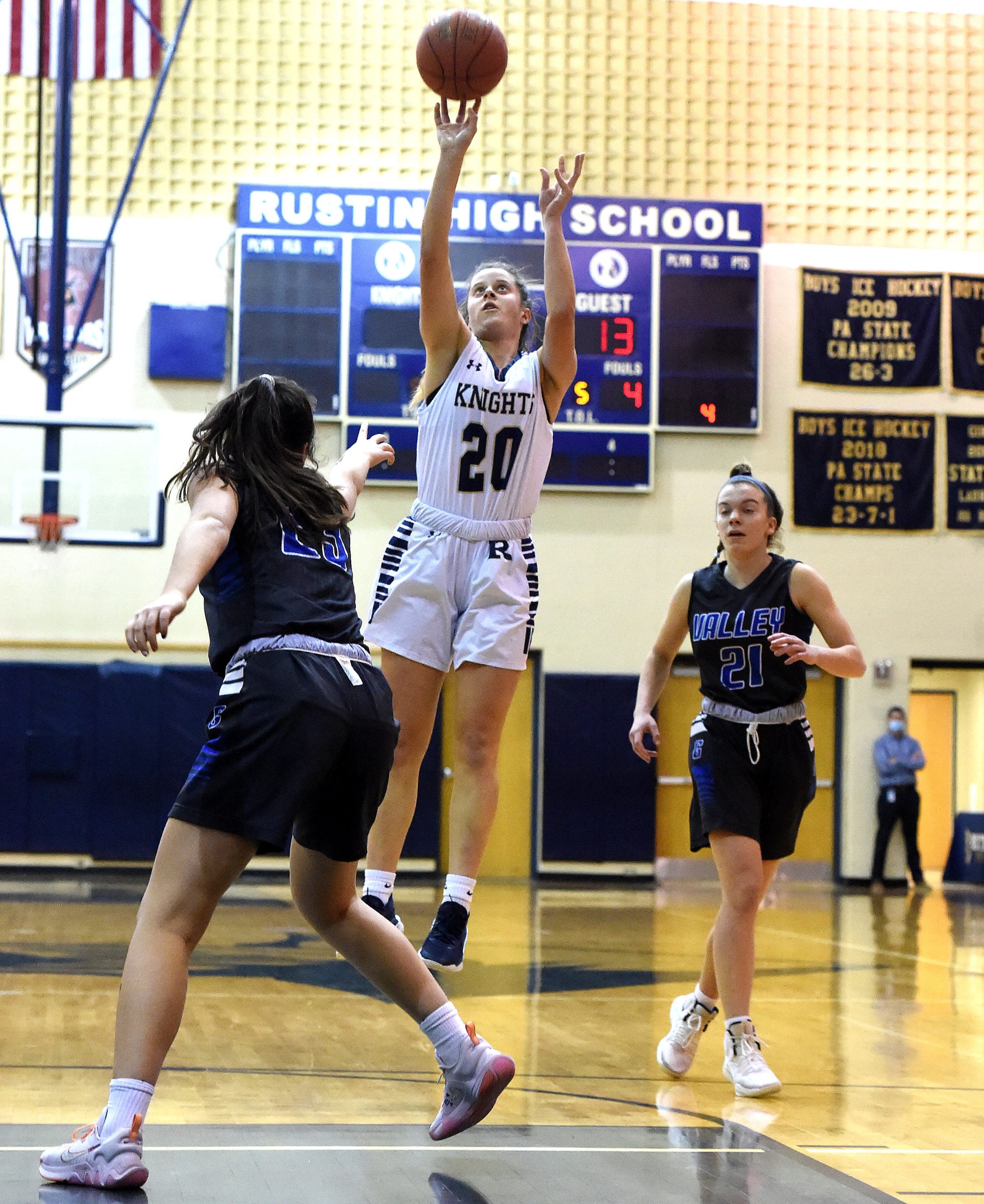 Now that league tournaments are in the books, 10 Chester County girls basketball teams take aim at one more thing in their to-do list, win a district title.
Five squads take their first steps on that road tonight as the District 1 Tournament tips off.
In Class 6A, 24 teams will vie for 12 spots in the PIAA 6A state tournament. Plymouth Whitemarsh, who comes into the postseason unbeaten at 22-0, is the top seed. Souderton (20-2) is number two, Methacton (20-2) is third, while Pennsbury (20-2) is seeded fourth. The tournament had 20 teams in the field last season after being delayed due to COVID-19.
The highest ranked local team is Ches-Mont League champion West Chester Rustin (20-4) at No. 6. The team they beat in the Ches-Mont final, Downingtown East (18-5) is eighth. They both have opening-round byes, and will host second-round games on Tuesday.
The Golden Knights look to improve on last year’s finish when they were ousted by Upper Dublin in the quarterfinals.
“All of our attention is now on Districts,” said Rustin star guard Laine McGurk. “We’re going to use this momentum to play our best and win as many games as we can.”
The lone double local contest in the first round is No. 16 Great Valley hosting 17th-seeded Conestoga. The Patriots come in at 14-8, having won four in a row and six of their last eight games. The Pioneers (13-8) have dropped two of their last three. The winner will have the task of going up against Plymouth Whitemarsh on Wednesday.
Downingtown West (15-7), the 20th seed, takes to the road to face No. 13 Upper Dublin. The Whippets will try to get balanced scoring and good defense against the Cardinals.
No. 18 Coatesville will take on Central Bucks South. The Red Raiders (14-8) make a return to the postseason, guided by the senior leadership of Danae Ellzy.
“We’ve done a good job getting ready,” said Coatesville head coach Scott Barker. “We’re healthy and the girls are excited to play.
“Danae is our senior leader and that could be great to lean on, but sometimes ignorance can be bliss and a young team can just go and play and be free.”
Barker acknowledge that C-B South poses a stern test.
“They’re very aggressive in their transition,” he added. “They’re well coached and are very good in the half court.”
The Red Raiders will be missing forward Aidan Langley.
Kennett gets a first-round rematch when they tackle No. 9 Haverford. The Blue Demons (12-7) fell, 56-44, to Haverford in the first round last year.
“We had a decent week of practice,” said Kennett coach Vince Cattano. “They’re excited to play. Haverford knocked us out last year, so we are familiar with them. I’m not sure if that’s a good thing or bad. We’ll find that out.”
According to Cattano, Kennett will have to deal with Haverford’s height advantage.
“Their size presents some challenges,” he said. “They can score the ball inside and we have to win other battles to limit the damage done inside.”
To counter that, Cattano pointed out that the Blue Demons will have to shoot well and take care of the basketball.
Over in Class 5A, perennial class power Villa Maria Academy, the 2019 District 1 champion, is set to host Upper Perkiomen. The seventh-seeded Huricanes (10-11) have struggled at times, but come in as the higher seed.
Villa will try get out on the transition and make shots from the outsie, led by guards Ella Iacone and Maura McHugh. They hope that a rugged nonleague schedule will pay dividends in the postseason. The winner will move on to face No. 2 Marple Newtown on Tuesday.
The other local team in Class 5A, Bishop Shanahan, has earned a bye in the first round and awaits the Academy Park-Harriton winner in the quarterfinals.
Lastly, in Class 4A, Collegium Charter makes its debut in district play. The third-seeded Cougars come in with a 13-8 mark and will face No. 2 Villa Joseph Marie in the semifinals on Tuesday.
Collegium relies on the impressive performance of junior DeJah Morris, who averages almost 18 points and six rebounds a game. Point guard Serenity Burgess is a very capable Robin to Morris’ Batman. She’s averaging 14 points and four rebounds per game. Junior guard Alasiah Carter has come into the starting lineup and has provided a defensive spark for the Cougars.