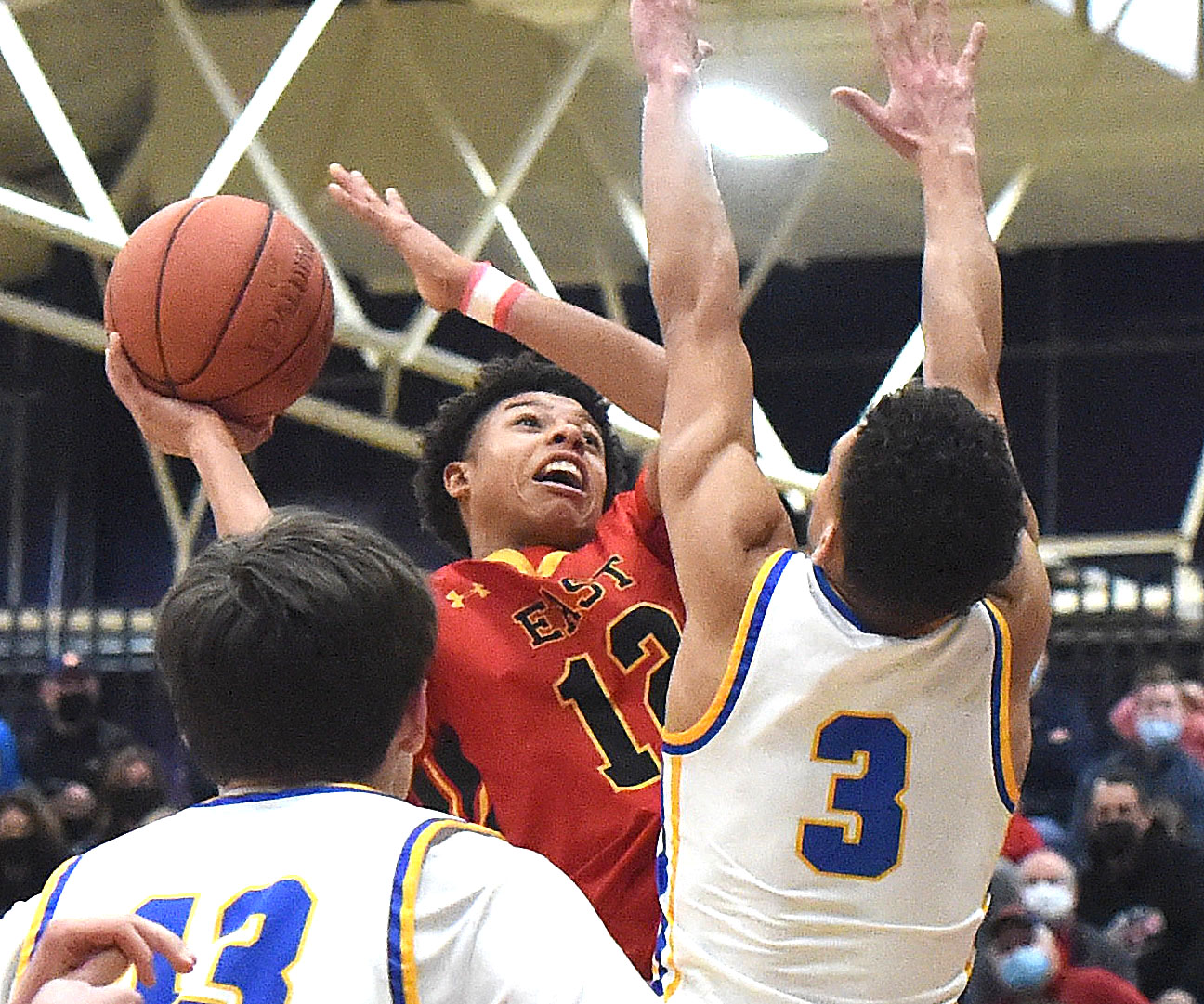 WEST CHESTER- The third time was surely the charm Tuesday night for the West Chester East boys basketball team in the Ches-Mont League championship game against Downingtown West at Hollinger Field House. Downingtown West had defeated the Vikings the two times the teams played in the regular season but a fired up Vikings squad turned the tables Tuesday night and came away with a convincing 55-48 win to claim the third straight Ches-Mont League crown for the Vikings.

West Chester East (18-6) used a box and one defense on Whippets (17-6) super star guard Dylan Blair as the Vikings Jose Ramos drew the assignment and held Blair well below his season average with the Whippets leader getting just eight points.

As a team the Whippets shot a putrid 16 for 53 from the field and settled for mostly outside shots all night.

“It was tough because he is always moving and he is a great player,” Ramos said. “But I wanted to get it done for the team and we felt all week that we would win this game. We brought a ton of energy to the game tonight and that was the difference. We have been here before.”

West Chester East sprinted out to a 6-0 lead in the games first two minutes on two baskets by Jack Kushner and one by Ramos. Kushner led the Vikings with 18 points to go along with 10 rebounds and the Vikings junior seemed to be in the right spot for every loose ball.

KJ Cochran added 13 points while Ramos contributed eight of his own plus his magnificent defensive performance.

West Chester East shot 11 for 24 from the field in the first half and took a 25-15 lead over the Whippets at halftime. Downingtown West was led by Jake Warren, who poured in 18 points, including four three-balls and Cooper Hardin who added 15 points.

But the night belonged to the Vikings as they forced 12 Whippets turnovers and only turned the ball over eight times themselves on the night. The Vikings added to their halftime lead by outscoring Downingtown West 19-15 in the third period to take a 44-30 lead after three periods.

“We just came out and played really hard,” Kushner said. “And it helped that we have been enthuse big games before. We knew we were going to twin they game. We said before the game that they were not going to get any loose balls or second shots and then Jose ddi a great job on Blair and we took control of the game. This is just a great feeling to beat them in the championship game.”

Downingtown West did not quit however and when Warren buried a three-ball from deep it was a 54-43 Vikings lead with 1:47 to play in the fourth period. But the Vikings hit their free throws and the Whippets could not knock down enough shots and West Chester East had a decisive 55-48 win and its third Ches-Mont League title in a row.

“The box and one I thought Jose did a fantastic job,” West Chester East coach Tom Durant said. “He is one of our offensive threats so we took him out of the offense a little because he had to expand so much energy on Dylan, who is a great player. Our kids played real hard and they had to because Downingtown West is a real good team and Stu (coach Ross), does a great job and they are going to be very tough in districts. But our kids really wanted this game.”