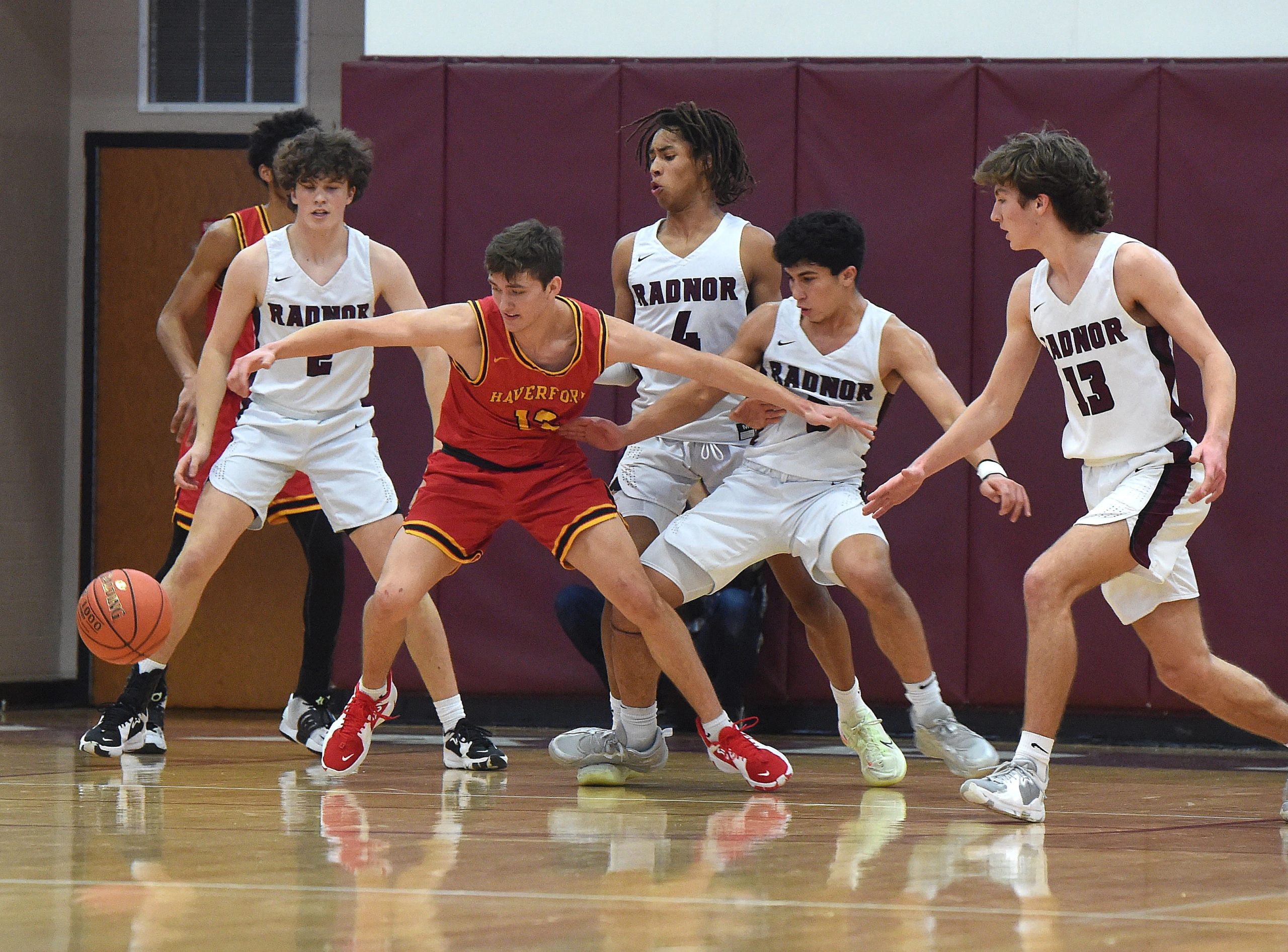 RADNOR – The mantra from the Radnor bench Saturday, as it has been most of the season, was getting to three. Three straight stops, the rallying cry goes, and you can create serious cushion on the scoreboard.

In a raucous first quarter of the Central League semifinal against Haverford Saturday afternoon, those stops eluded them. But once the Raptors dutifully ground out one, then two, then three stout defensive possessions in a row, the momentum snowballed … all the way into a Central League final.

Radnor put the clamps on Haverford over the final three quarters, riding 21 points and 14 rebounds from Jackson Hicke to a 53-38 win. Second-seeded Radnor (20-2) advances to Monday night’s final against top-seeded Lower Merion. The game is at Ridley at 7:45. The Aces routed No. 4 Conestoga, 55-33, in the other semifinal.

Radnor led, 20-17, after an opening quarter in which both offenses had the run of the gym. But Radnor’s defense adjusted more quickly and more thoroughly to grab the advantage.

“I think we just have to keep talking together, staying together and committing,” point guard Danny Rosenblum said. “We always say, three stops in a row, because our offense really feeds from our defense, and just committing to it is our gameplan.”

The first quarter stood apart from the other three, Radnor up after eight sizzling minutes. The teams shot 4-for-10 from 3-point range in the first, then 1-for-15 the rest of the way. More than half of the game’s assists (eight of 15) were fired off in the first eight minutes, amid crisp cuts and ball-sharing on both sides.

The offensive execution wouldn’t last, and Radnor’s defensive pressure was a big reason why.

“It was high-scoring, it was intense,” Hicke said. “That’s what you’ve got to expect in a playoff game. You’ve got to give it your all and leave it all on the court. Both teams did a very good job, shot well and kept attacking. It was exciting.

“But we kind of slowed it down as the game went on, played a little better defense and that led us to the win.”

A jumper by Nick Colucci put Haverford up, 23-22, midway through the second quarter. But that’s when Radnor started piling up stops, creating room for a 9-0 run into halftime, Hicke supplying the last seven.

After scoring it first 17 points in eight minutes, it took Haverford another 23 minutes to get its next 17 points, not happening until a Colucci 3-pointer with 1:09 left to play. No. 3 Haverford (17-5) didn’t score its first points of the fourth until 2:41 remained and the deficit had stretched to 15.

The credit goes to Radnor for muting any chances to generate momentum, like when Colucci and Colin Reynolds, after stealing the inbounds pass, scored consecutive buckets in the final 4.7 seconds of the third quarter. (That was half of the eight points the Fords scored in that frame).

Rosenblum was one of the ringleaders, charged with muting Googie Seidman. Fresh off seven 3-pointers in the opening-round win over Penncrest on Thursday, Seidman scored seven points in the first quarter Saturday. But he was shut out the rest of the way, not attempting a shot in the second half with Rosenblum as his shadow. Radnor’s Jackson Hicke is congratulated by teammates after a basket and foul in the first half. Hicke had 21 points and 14 rebounds as the Raptors beat Haverford, 53-38, in the Central League semifinals Saturday. (PETE BANNAN – DAILY TIMES)

“I think it just really comes from me trusting my teammates,” Rosenblum said. “If I’m running him off the line, I know my teammates have my back on the backdoor cuts. Our defense was a lot about trusting each other.”

Colucci led Haverford with 16 points, including all seven of the team’s fourth-quarter points. J.R. Newman added eight points, though on 4-for-15 shooting. After hitting on 12 of 21 attempts from beyond the arc against Penncrest, the Fords were just 3-for-13 against Radnor.

Some of that owes, indirectly, to Radnor’s scoring balance, where all five starters scored in the first half. There’s nowhere to rest on the defensive end against the Raptors, and that one-through-five pressure takes a lot out of a team’s legs, with Newman’s effort chasing Hicke all day the most prevalent example.

“They were a little worn down in the second half I think because we love to play unselfish,” Hicke said. “We move the ball, anyone can score at any time, and it’s anyone’ game on any night. So it’s really hard to defend. Every defender on that team has to be ready at any time.”

Hicke was the only one immune to offensive containment. Rosenblum had seven of his nine points in the second half, after foul trouble in the first. All seven of Charlie Thornton’s points came in the first quarter. Cooper Mueller added 10 points in fits and starts, most coming off his defensive work.

But Hicke was the constant. He ended the first quarter with a spot up 24-footer to break a tie. He added a huge and-1 in the second to punctuate his solo 7-0 run. And his work on the glass – Radnor outrebounded Haverford, 34-20 – extended possessions and kept the ball out of Haverford’s hands.

“When he plays amazing like this, it’s really fun to watch,” Rosenblum said. “And his energy feeds the rest of our team. It’s a domino effect with everyone on the team.”

Those dominoes are tumbling into a league final, no small feat for the only Class 5A team among the league semifinalists. It offers a chance to avenge one of Radnor’s losses, a 60-46 setback on Jan. 21, before the Raptors embark on the District 1 tournament, in which they are the top seed.

That first chance at a banner, particularly for a nucleus of juniors that has been playing together for years, is something the Raptors are immensely proud of.