Pennridge ramps it up, earns commanding win over rival Neshaminy 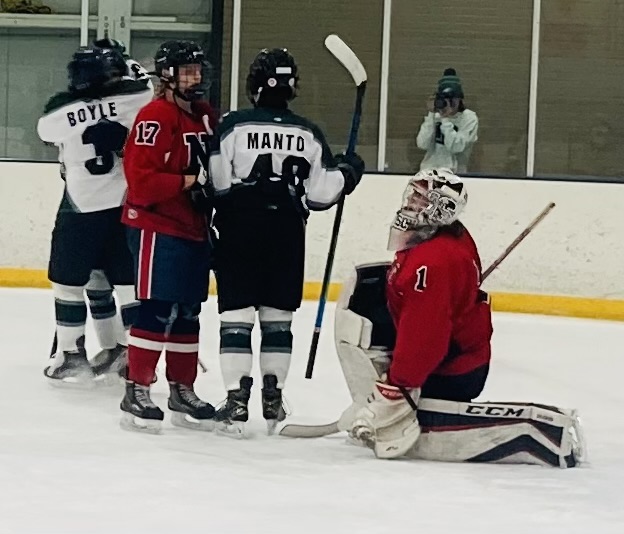 COLMAR — Instead of looking ahead, Pennridge pushed full steam ahead, skating to a thorough, 6-1 victory over rival Neshaminy Wednesday night at packed Hatfield Ice.

“I thought it was one of our most complete games, right from the start,” Rams coach Jeff Montagna said. “We had a very poor start in our last game (in a 5-3 win over Central Bucks South). We stressed that we needed to take care of that, and tonight I thought it was our best first period of the year. And overall I thought it was probably our best game.”

The Rams raised their unbeaten record to 13-0, including an 8-0 mark in the Suburban High School Hockey League’s Continental conference, and have a big showdown in the regular-season finale against Council Rock South (10-1-1, 8-0 in the National), at Grundy on Wednesday at 7:20 p.m.

Neshaminy is now 8-4-1 on the year, including a 5-3 mark in the National. The Skins skate at Grundy next Thursday, against Pennsbury at 7:20 p.m.

Ryan Pico made 41 saves for Pennridge in the win over Neshaminy on Wednesday, Feb. 9, 2022. Kev Hunter, MediaNews.

Pico provided the Rams plenty of backbone, making 41 saves and keeping the Skins off the scoreboard until Pennridge had built a substantial advantage.

Pierce McGinley, Andrew Savona and Tyler Manto all scored first-period goals to give the Rams a 3-0 lead.

Pennridge turned up the pressure against Neshaminy goalie Brian Nelson.

The Skins did cut it to 3-1 with 3 minutes, 16 seconds left in the second, as Daniel McColgan and J.J. Hathaway set up Max Gallagher, but Pennridge responded the way an undefeated team does.

“We put ourselves in a hole there, taking a dumb penalty to give (Neshaminy) a five-on-three and give them a little bit of life. But after that goal, the guys killed the rest of the penalty off and I thought they took over the rest of that period,” said Montagna.

Kevin Pico put one away for Pennridge, assisted by Manto and Ryan Schuler. It was 4-1 Rams.

“I thought that was a huge goal,” Montagna said. “It took away any momentum (Neshaminy) had.”

Goalie Ryan Pico has been a constant for unbeaten Pennridge. He had 41 saves in the win over Neshaminy on Wednesday, Feb. 9, 2022. Kev Hunter, MediaNews.

Pennridge padded its lead with a breakaway, shorthanded goal by Aeryk Lehrhaupt, making it 5-1 after two, and then scored the only goal of the third, a tally by Shane Dachowski.

“It’s been really fun,” Ryan Pico said of this 2022 joyride for the Rams. “We’ve been winning a lot, scoring a lot of goals. We’re all pretty close so it’s fun to play together.”

“Two undefeated teams playing for first place going into the playoffs,” Montagna said of the clash with Rock South. “We just wanted to get through this one and not look ahead, and now we can.”