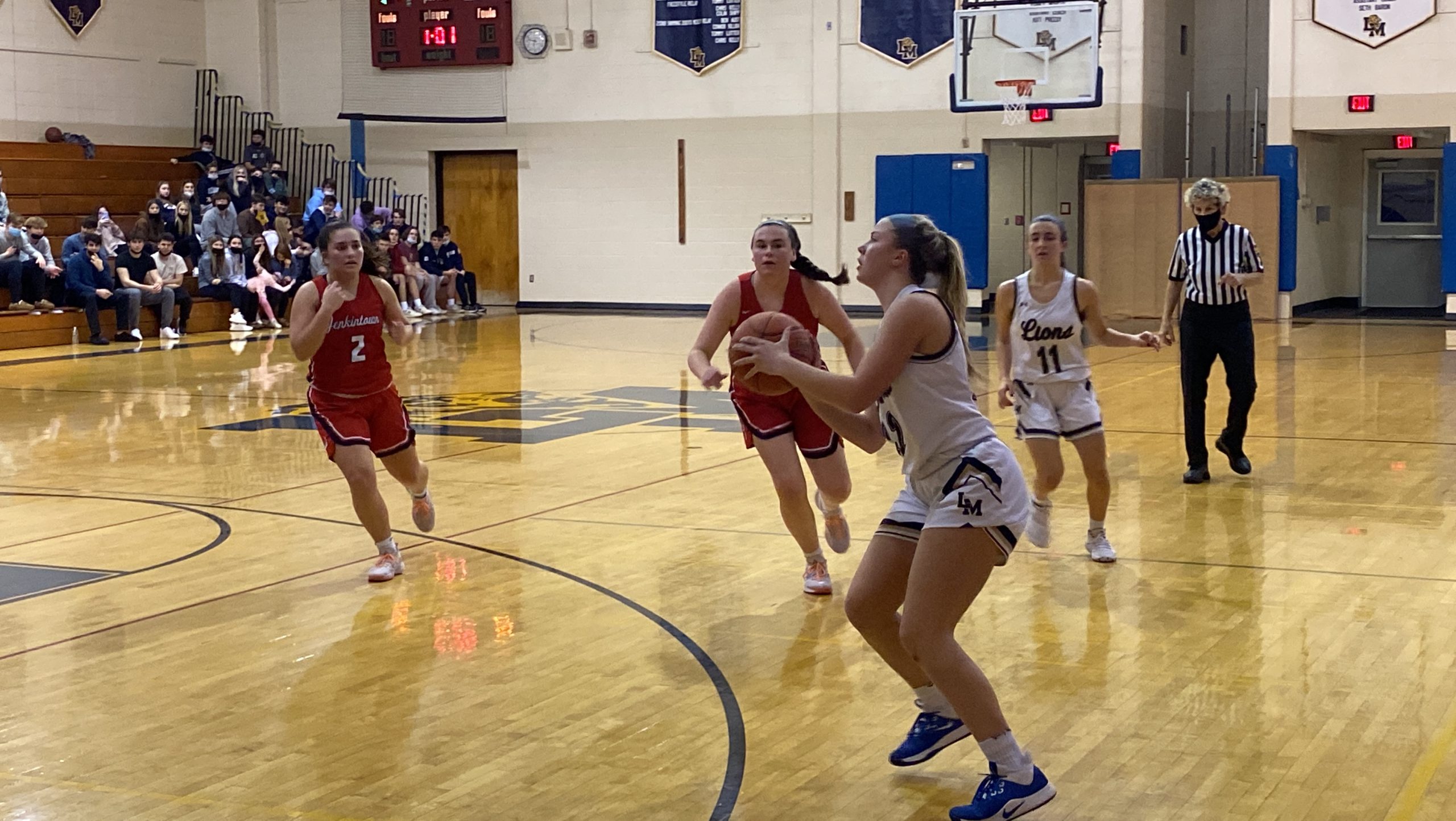 LOWER MORELAND >> Jess Dugo has been working through a shooting slump. And for the Lower Moreland girls basketball guard, there was no more opportune time to break out of it than on Senior Night.

Dugo was one of three Lions to score in double figures in Monday’s nonleague matchup with visiting Jenkintown, connecting on a pair of 3-pointers in posting 12 points as Lower Moreland used a strong second-quarter finish take a 10-point lead into halftime before holding off the Drakes to earn a 49-34 victory.

“My last game I was starting to shoot, but this game I was actually able to execute my shots,” said Dugo, one of five seniors honored before the game. “And I’m really glad my teammates were able to support me through this whole thing and they kept passing me the ball, kept encouraging me to shoot. It was a great team win all-around.”

Liz Neeld had a game-high 17 points – 11 coming after halftime – while Briana McFerran added 10 points for the Lions (9-10, 6-8 SOL Freedom Division), who capped the first half with a 10-0 run to go into intermission up 31-21. Baskets from Neeld and McFerran in the third made it 14 straight points.

“I think we just played together as a team more,” Dugo said. “Sometimes we struggle in the beginning just to get our chemistry back so I think definitely being able to play as a team more, we were able to execute better.”

The Lions pushed their advantage to as large as 17 twice early in the fourth before a 7-0 Jenkintown burst cut the margin to 41-31 with 5:01 remaining. The Drakes were down nine at 43-34 after Lily O’Brien’s basket down low but did not score again.

Tori Finnegan grabbed a rebound then found Neeld upcourt for a layup and an 11-point lead while McFerran collected the final four points as Lower Moreland ended an eight-game losing streak to its former Bicentennial Athletic League rival.  The Lions, who joined the SOL last season, claimed its first win over the Drakes since a 44-36 victory in the 2016 BAL tournament quarterfinals.

“I have so much respect for (Jenkintown coach) Jim (Romano) and his program, they are so well-coached and disciplined, I said you have to go out and win this game cause they’re not going to lose it,” Lower Moreland coach Rich Becker said. “And my seniors, they were able to get out – I have three girls that don’t play a lot, I was happy for them, one of them scored in the beginning, they did what they needed to do in the beginning and we were able to get into a rhythm in the second quarter.”

“Offensively I think we had our shots, we just didn’t put them in,” Romano said. “And I thought defensively we did pretty good and then when it was 41-31 we got it with 10 and then hopefully with five minutes left plenty of time but then we went south.”

Lower Moreland has won two of three since a four-game losing skid to sit fifth in the District 1-4A rankings but it looks likely it will be unable to qualify for the four-team playoff field. The Lions have two division contests this week, visiting Springfield-Montco 7 p.m. Tuesday then host William Tennent 7 p.m. Thursday.

Jenkintown is third in the District 1-1A rankings with the top four making the postseason. The Drakes, who have won the past six District 1-1A titles, have three more nonleague games this week, all at home with 7 p.m. tip-offs – facing Merion Mercy Wednesday, Executive Education Academy Charter Thursday then Nazareth Academy Friday.

Before districts, Jenkintown also has the BAL tournament, which was not held in last season’s COVID-shortened campaign. The Drakes had won the previous three league playoffs.

“We knew going into the season it was going to be a marathon,” Romano said. “We have young players and it’s going to be each game getting a little bit better. Lower Moreland is very, very good – good team, so we want to play good teams – we want to get ready for our league competition.”

Two Lily O’Brien free throws pulled the Drakes even at 11 with 4:24 left in the second quarter but those were the visitors’ final points of the first half.

Neeld found Jess Shein inside for a layup while Neeld scored the next four, converting on a scoop shot to put the Lions up 17-11.

“I thought Liz Neeld – one of her best games of the year,” Becker said. “I don’t know how many steals she had, she had a ton of deflections and 17 points, I think that’s a season-high for her and she was just great on both ends of the floor.”

Jenkintown trailed 25-11 in the third before a McGrath three stopped the 14-0 run while two Molly Stephenson foul shots at 5:27 had the Drakes within 25-16. But McFerran scored on a putback and Dugo drained a three, pushing the Lions’ advantage to 30-16.

“She’s been in such a shooting slump lately, she’s been so reluctant to shoot so I was happy just to see her come back and I guess you could say get her swagger back,” said Becker of Dugo. “She got the ball, she was a shooter and for me as a coach that was the biggest takeaway. She’s starting to just start playing and not thinking, she’s getting out of her head a little bit. And I thought she had a nice game.”

Walsh connected on a 3-pointer but Neeld responded with a three then made a steal, scored in transition and drew a foul at 1:28 to make it 35-19 Lower Moreland.

After another Walsh triple, a Finnegan jumper in the lane off a Neeld inbounds had the Lions up 37-22 going into the fourth.

A Dugo jumper made it 39-22 with Lower Moreland again leading by 17 at 41-24 on a basket by Neeld basket. Jenkintown proceeded to rip off seven straight – a two from O’Brien, a Walsh trey and a pair of free throws from McGrath at 5:02 – to get within 41-31.

Finnegan connected with a cutting McFerran for a layup, putting Lower Moreland up 12 before a McGrath foul shot at 3:27 then an O’Brien basket made it 43-34. But that was as close as the Drakes could get.