Boys Basketball: Lee the key to an important Penncrest victory 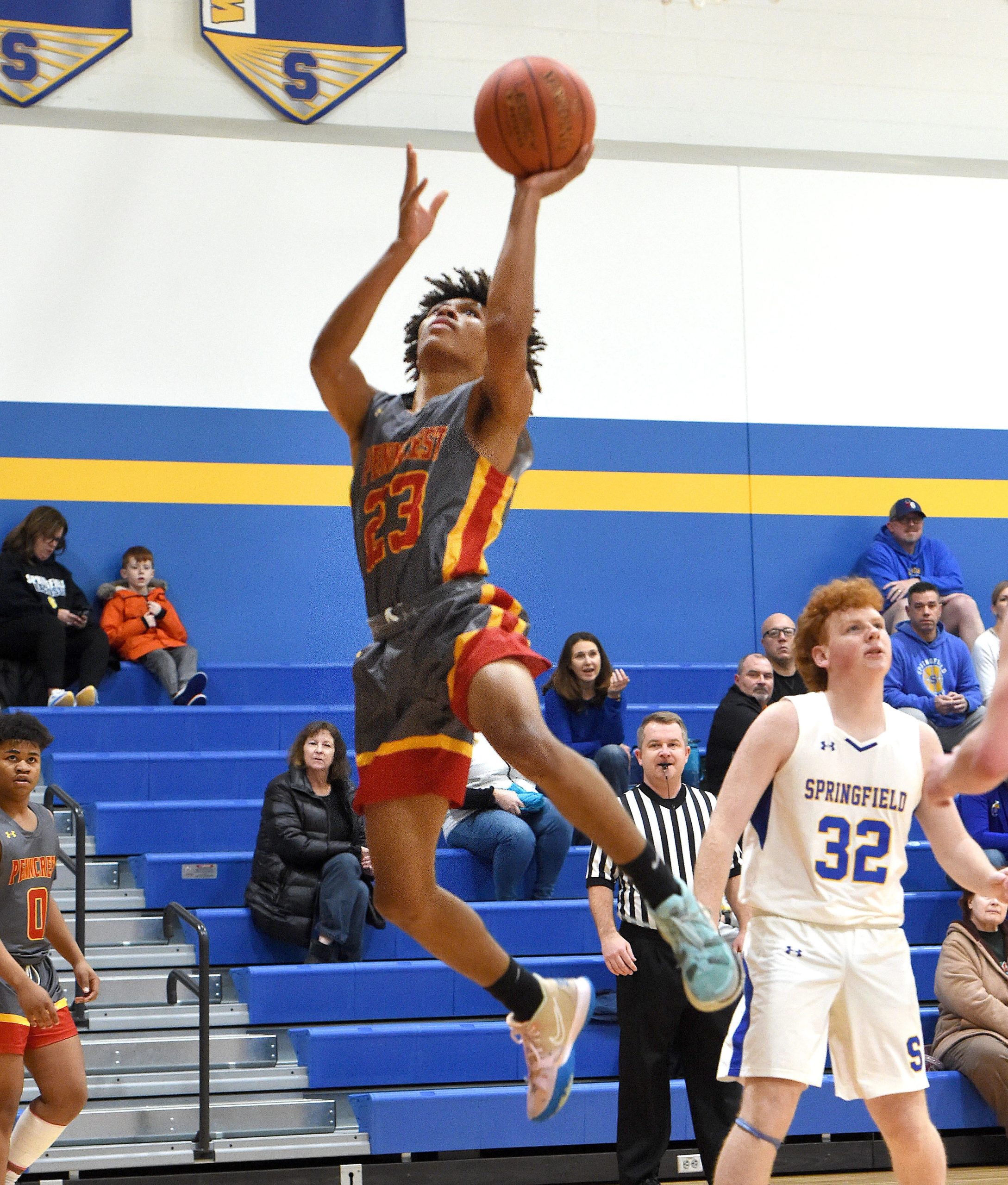 Penncrest's Saahir Lee goes up for a shot in the second quarter against Springfield Friday evening. Lee scored 32 as the Lions went on to a 48-35 victory. (Pete Bannan - MediaNews Group)

SPRINGFIELD — Without thinking, Saahir Lee walked toward the Penncrest locker room Friday night with the game ball still tucked lightly under his arm. When reminded that he still had it in his grasp, he apologetically tossed it back toward the scorer’s table with a sheepish smile.

The way Lee played Friday, he probably could’ve kept the ball, and stuck around to turn the lights out at the gym. He’d already taken care of just about everything else basketball-related on the day.

Lee was unstoppable, collecting 32 points in leading Penncrest to a 48-35 Central League victory over Springfield.

“In the warmups, I was feeling it so I just kept letting it fly,” Lee said. “I made a few in the beginning, and when they pulled us in for a timeout (coach Mike Doyle) told me, ‘just keep shooting, just keep going.’ After a while, they kept going in, they kept falling. I was shooting the exact same shot.” It took a Mike O’Donnell 3-pointer with 18 seconds left for Springfield to nudge ahead of just Lee on the scoreboard. Lee was an uber-efficient 11-for-14 from the field and 9-for-11 from the free throw line, going 8-for-9 in the fourth quarter as Penncrest (10-10, 7-8) showed no wobble in closing out the game.

The original scoring impetus came from a matchup to exploit. Springfield came out in a 2-3 zone, a wise move against a Penncrest team that isn’t always the most consistent of long-range shooting outfits. But Lee attacked the soft spot at the free throw line again and again and again. Even when Springfield shifted to a 1-3-1, his 16-foot jumper was dialed in beyond the point of the Cougars cooling him off. Largely thanks to Lee, the Lions shot 50 percent (17-for-34) from the field.

“When he’s hitting, you trust him,” senior guard Ben Stanton said. “You go to him, whoever is hot, whether it’s me or him. We know to trust that guy, and tonight was his night. So just feed him in that area and keep him going.

Penncrest also negated Springfield’s preferred plan of attack. The Cougars held a height advantage across the board, which meant lots of early attempts to post up their guards in the post, combined with the bigs passing out of the high post. But the Lions got their hands in passing lanes, caused 15 turnovers and contested enough shots at the rim to force Springfield into a jump-shooting game.

The Cougars produced points in spurts – an 8-0 run to peg back Penncrest’s 8-1 start in the first quarter; five quick points after Lee put Penncrest up five in the third – but never could sustain it.

“I think offensively, we passed up a lot of shots, including myself,” O’Donnell said. “I think we need to keep staying aggressive, because we could’ve won. We had mismatches in the post that we could’ve taken advantage of.”

The win gives Penncrest a season sweep over the Cougars and entrenches their District Class 5A playoff spot, where the Lions entered in sixth. A top-four bye might be beyond them, but teams five through eight host first-round games in the 12-team tournament. It deals a lethal blow to the playoff aspirations of the Cougars, who entered 28th in the Class 6A rankings, where 24 teams make the field. Springfield travels to West Chester Henderson Saturday and hosts Radnor next Tuesday.

Stanton scored six points for Penncrest, as did Chase Wilson. He and Garrett Whtifield combined to shoot 3-for-6 from 3-point range, a solid percentage for the Lions’ support shooters. Quinten Perilli supplied eight rebounds.

O’Donnell was Springfield’s only offensive outlet in the second half. He scored all six of the Cougars’ fourth-quarter points and 15 of the 20 they scored after the break. He also added five steals. Mike Hoey scored six points.

But Friday was all about Lee, guiding Penncrest to its third consecutive win. After struggles early in the season, things have started to jell at just the right time.

“The confidence is great now,” Lee said. “We like to try to keep it low and stay locked in. We don’t want to get too locked in, and it’s only one game so anything can happen. Upsets happen all the time, guys get injured, some people can get COVID, so we try to keep our composure when we play like this.”

Marple Newtown 55, Harriton 46 >> Matt Gardler led the way with 13 points, and the Tigers preserved the win with a 14-for-15 performance from the free-throw line.