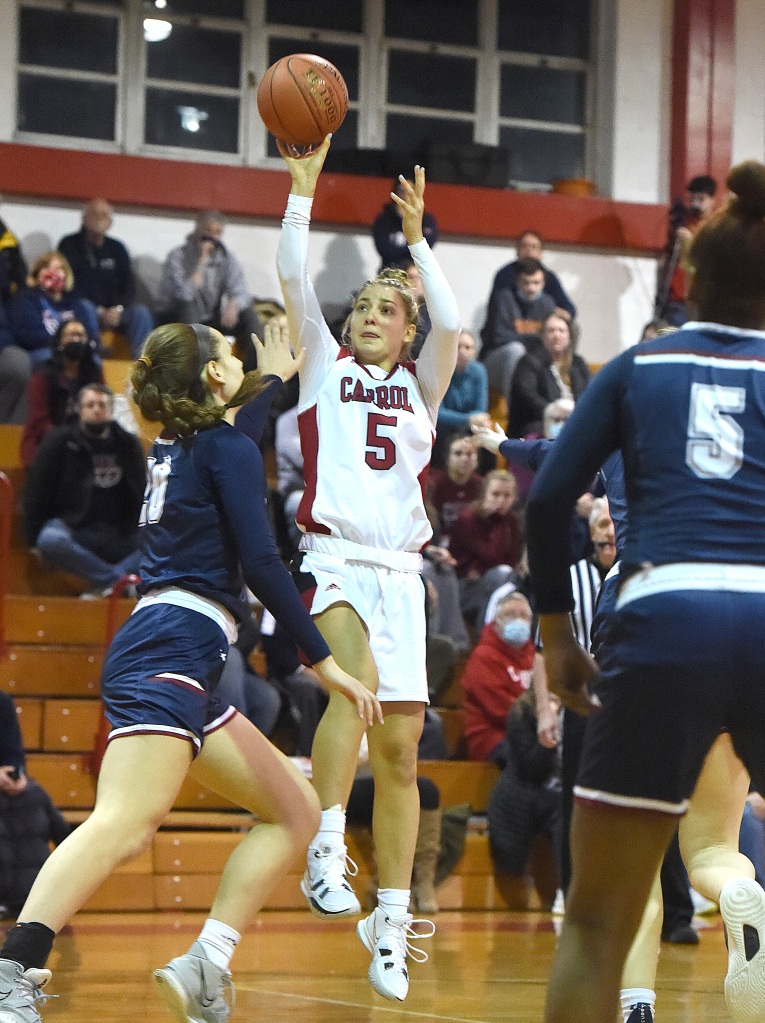 RADNOR — Archbishop Carroll was prepared to make a statement Tuesday.

In a game that should determine the No. 1 seed in the Catholic League playoffs, the host Patriots won the battle of the top two teams in Delco … and maybe the best squads in the entire region.

Even better, with their convincing 49-39 victory, the Patriots remained unbeaten in the league with a 7-0 record.

This was an absolute must-have for the Patriots, who too often of late have been overshadowed by O’Hara and Archbishop Wood in arguably the state’s top league for high school girls basketball.

The Patriots stymied the Lions, forcing 14 turnovers. O’Hara’s best players, seniors Maggie Doogan and Sydni Scott, were limited to a combined 13 points on 4-for-15 shooting from the field. The total points were the fewest scored by O’Hara since its season-opening, 41-39 loss to St. Mary’s (Calif.).

“They’re such a great team, and we have such a great rivalry with them,” said Carroll senior guard Grace O’Neill, who scored five of her 15 points from the free-throw line in the fourth quarter. “I’ve played with Maggie Doogan since the fifth grade and I’ve played against a lot of these girls over the years. It was a big game for us.” The Patriots had five takeaways in the fourth quarter. The game changer came on back-to-back possessions. Meg Sheridan picked off a pass in the frontcourt and scored on a breakaway lay up to give Carroll a 34-28 lead. Seconds later, Taylor Wilson intercepted a pass and hit two foul shots to extend the lead to eight. Wilson then scored from inside the paint to make it a 10-point game.

“We were practicing so much for this game and preparing really hard,” said the junior Wilson, who scored eight of her 15 points in the final stanza. She was a perfect 7-for-7 from the charity stripe. “I think it really showed tonight. … We bumped their cutters a lot and I think that’s what helped so much.”

“I think they did do a good job trying to take time off the clock, but we were bumping their cutters and being physical with them,” said O’Neil, who is bound for Drexel. “I think our plan for this game was to be aware of their top scorers, make Sydni take some deep shots and cover Maggie in the paint. That’s something we were really aware of and focused on.” Archbishop Carroll defenders blanket Cardinal O’Hara’s (44) Maggie Doogan in the first half of their Catholic League game. The Patriot’s went on to a 49-39 victory. (PETE BANNAN – DAILY TIMES)

The Lions couldn’t find a rhythm offensively until it was too late. Bridget Dawson hit a 3-pointer, and freshman Molly Rullo made a basket to trim the Carroll advantage to 42-36. With 1:09 to go, Annie Welde made a triple to get the Lions within four, but the Patriots scored the final six points to seal the win.

Welde led the Lions with 11 points, five points, two assists and one block. Rullo chipped in nine points and Doogan finished with seven.

“I think it was a gut check for us,” said Doogan, the Richmond-bound forward and reigning Daily Times Player of the Year. “We were coming back at the end, but we couldn’t execute the way we wanted to. It is what it is and now we have to get ready for Lansdale on Thursday.”

Archbishop Wood 80, Bonner-Prendergast 28 >> The Vikings ran up the score against the Pandas, who trailed 32-1 after eight minutes. Ryanne Allen led the way for the reigning Catholic League champs with 20 points.