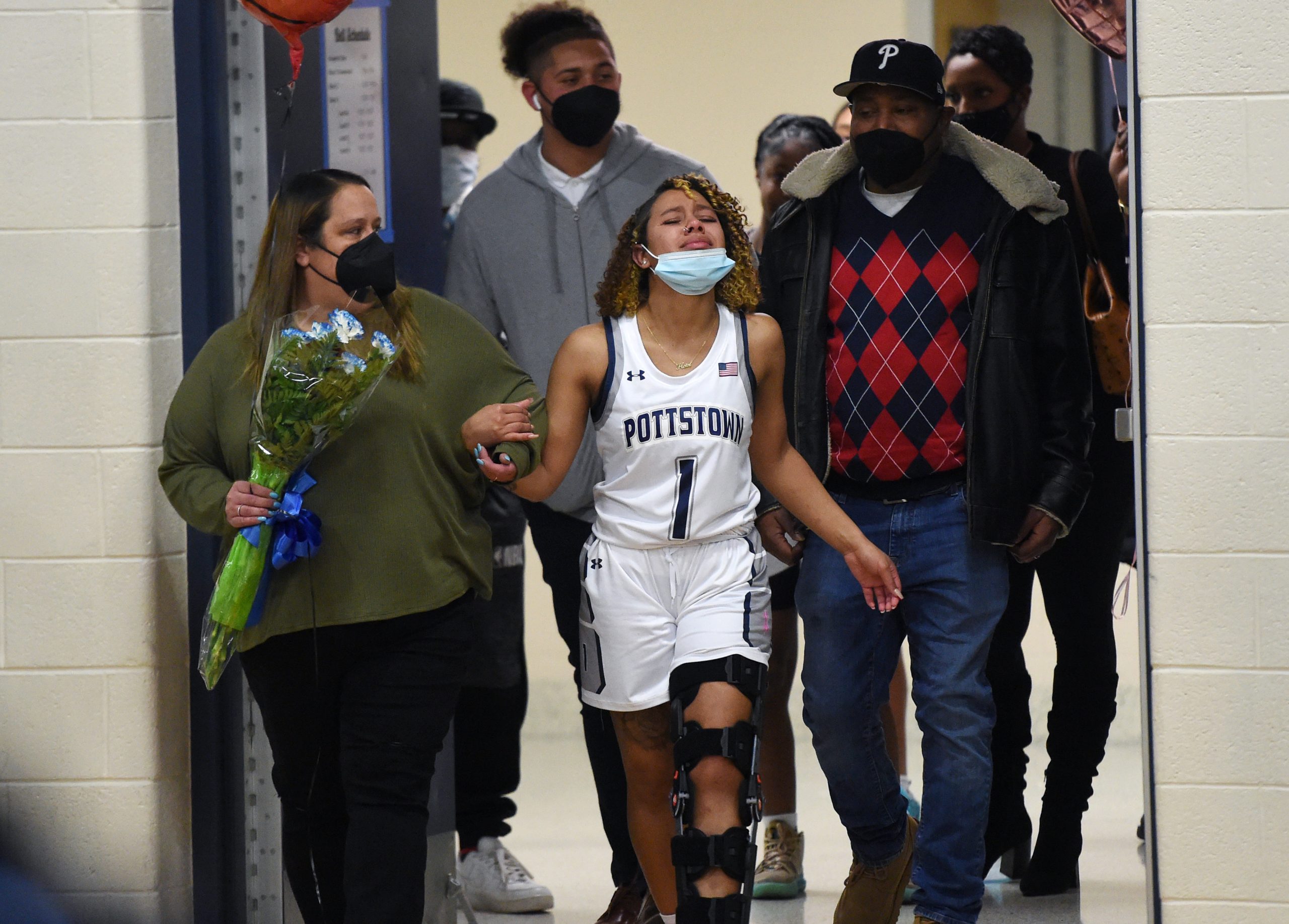 Pottstown senior Calista Daye and her family walk on the court during a pre-game ceremony before the Trojans’ Senior Night win over Pottsgrove on Thursday. (Owen McCue - MediaNews Group)

But for the Pioneer Athletic Conference’s leading scorer, an assist to start the contest was the highlight of Thursday’s Pottstown victory.

Watson passed up court to classmate Calista Daye for an easy layup to open the third game of a crosstown tripleheader.

It was Daye’s first start and basket of the season – her only one, too.

Wearing a brace on her injured left leg, she was promptly subbed out and greeted with applause from those in the gym.

The Senior Night moment provided a brief opportunity for the two four-year varsity contributors to share the floor after Daye went down with a torn ACL prior to the 2021-22 season.

“It brought some positivity to me just do it one time. Two points for the season,” Daye said.

Watson and Daye have played together since eighth grade and both were contributors at the varsity level as soon as they got to the high school.

Last season was a breakout campaign for Daye as she averaged 11.6 points and 6.3 steals per game as a junior. She and Watson were supposed to team up in the Trojans’ backcourt this winter to help Pottstown compete for a Frontier Division title.

After becoming the Pottstown girls soccer team’s career leading scorer in the fall, Daye tore her ACL in the basketball team’s first scrimmage, dashing those dreams.

“I was going through it, still am,” Daye said. “But I just got surgery and now I’m working towards playing in college.”

“It hurt,” Watson said.”I need her on the court. She’s a big part of the whole team.”

Watson, Daye and fellow senior JoJo Lamarre were freshmen when coach Madison Morton took over the program four seasons ago.

The Trojans (5-13, 2-9 PAC, 2-6 Frontier) haven’t met the expectations they had in the preseason, but Thursday night’s victory gave them the first sweep over the Falcons since 2010-11, which is something the Class of 2022 can deservedly hang its hat on.

“There were more than that in the beginning, but those are the three who worked with us, battled through me and I battled through them,” Morton said. “We found a mutual respect to the point of their senior years. I was just so proud all three of them got to here.

“Losing the three of them, that’s going to be a big blow to the program for sure.”

Daye decided to stay a part of the team even after her injury. She shows up to not just games but also practices.

She was emotional during the pre-game Senior Night ceremonies, tearing up as she walked onto the court with her family.

“This is my team,” Daye said. “I’ve been playing with them since ninth grade. I have to stick with them until the end.”

Morton approached Pottsgrove coach Mike Brendlinger before the game about getting Daye a chance to score one final basket for the Trojans.

The veteran coach obliged, noting how important it is to do things for players who are ‘dedicated to the program.’

“Not having Calista, getting the injury early on in the very first scrimmage, that sort of altered our season a little bit, no fault to her,” Morton said. “But the fact that she’s still here as a teammate supporting her team, that’s why we were really happy. And thanks to Mike and Pottsgrove for the gimme layup and giving it back to them. I know that meant a lot to Calista and her family to be in the book.”

There were highs and lows to Thursday’s events for Daye.

She appreciated the celebration of her career and the opportunity to take the court with her teammates one more time, but she also knew it put some finality to her time as a Trojan.

“I feel like its end, but I’m trying to stay positive and have a positive outlook and support my team at the end of the day,” Daye said.

Watson, who scored 29 points in Thursday’s win, has had one of the best careers in Pottstown history. She became the 12th girls player to reach the 1,000-point milestone in a loss to Phoenixville Jan. 15.

As part of the pre-game ceremony, Pottstown athletic director Justin Baker gifted Watson a decorated 1,000-point ball in recognition for her accomplishment.

Watson’s big night against Pottsgrove pushed her to 1,169 career points — the sixth most in Trojans history.

“It was exciting knowing what I accomplished in the four years,” Watson said.

Morton contacted the other members on the 1,000-point list and had many of them recognized in person along with Watson before Thursday’s contest.

Former coaches Joe Masleh, Joh Cherneskie and Chris Jackson were also there for the celebration. Morton was on staff with head coach Masleh and Cherneskie during Pottstown’s first PAC title in 1997.

“It was awesome that so many of those female Trojans came out tonight,” Morton said.

“Unfortunately the program’s been down for the last number of years, both the boys and the girls at times. You get past a few generations and people tend to forget that Pottstown girls and boys basketball used to be very formidable.

“We had a lot of young kids here tonight, a lot of middle school kids, the youth program. I need them to see that there are people who have come through this program that are very successful that went on off to college and continued their success.”

The Falcons (0-14, 0-9 PAC, 0-7 Frontier) fell just short of picking up their first win Thursday. Pottstown jumped out to a 17-7 lead at the end of the first quarter, but the Falcons tied the game 24-24 at halftime on a three by Aaliyah Freeman.

Freeman scored 19 points in the game, including eight in the fourth quarter. She scored with 1:17 left to pull Pottsgrove within one, 40-39.

Ella Smith made a steal to give the Falcons an opportunity to take the lead, but they turned the ball over and Watson, who had all eight of her team’s points in the final frame, put the game away when she broke the Falcons’ press and scored the final points of the game.

“We just had that slow start, and you’re kind of fighting from behind,” Brendlinger said. “They did the things they needed to. The only thing we didn’t do very well was rebound. We gave up too many second- chance opportunities. But we came up with some big baskets and some of the girls made some nice plays.”