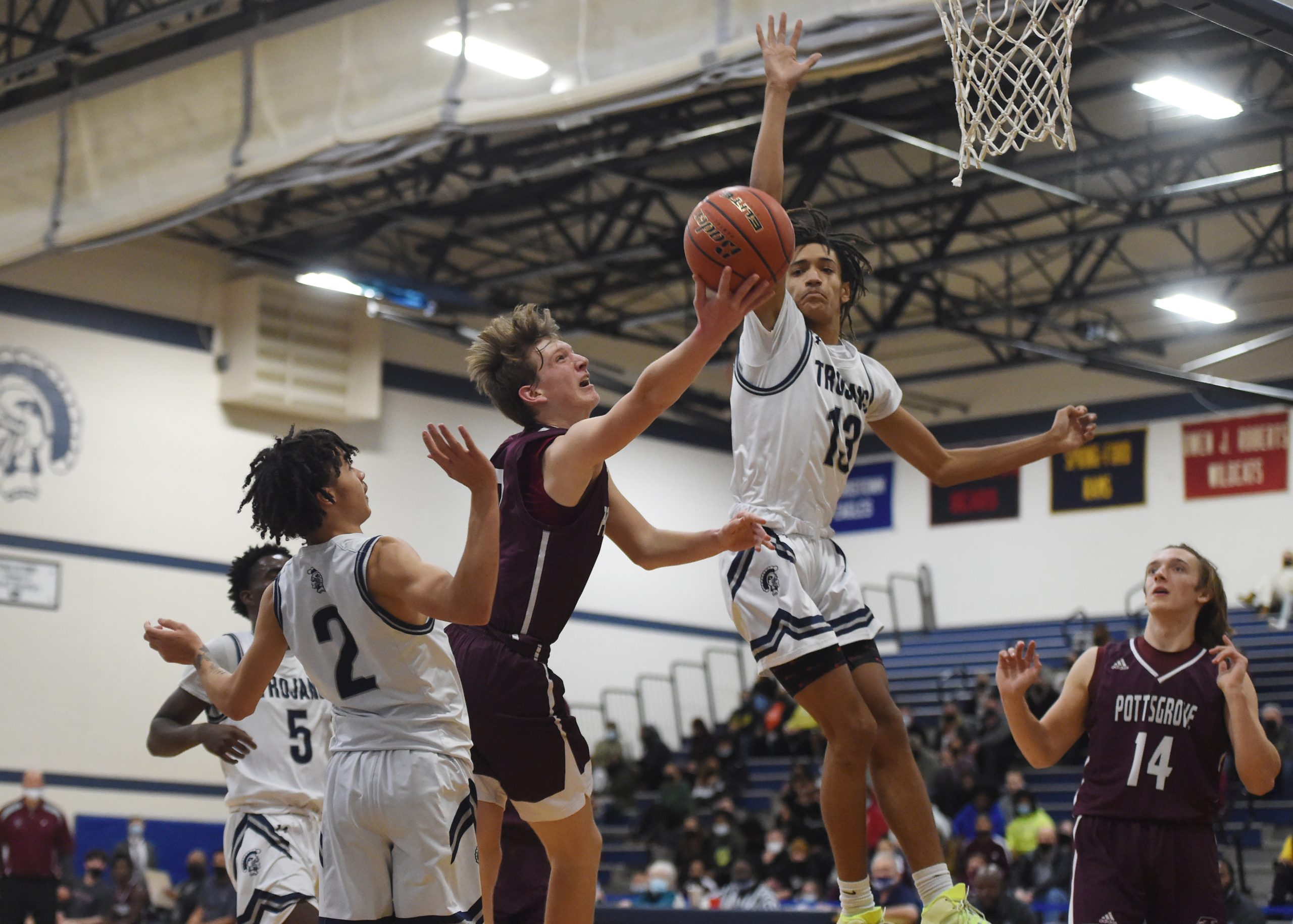 The Trojans’ defense frustrates opponents into mistakes and take advantage on the other end.

That was the case through three quarters Thursday against rival Pottsgrove, but not so much in the fourth as the Trojans saw a 16-point lead trimmed down to six with less than a minute to go.

With the game slipping out of their grasp, Pottstown returned to its strength. A steal by sophomore Sadeeq Jackson led to a fastbreak score by senior Gage Sibley to put the game away in a 63-54 PAC Frontier victory for the Trojans.

“We just try to come together as team on defense,” Sibley said. “Hustle, go for all the extra balls, extra rebounds all that. That’s how we try to win the games, intensity and effort.

“It kind of seemed like they were coming back,” Sibley said. “They weren’t missing many threes. They hit two back-to-back. It was a big steal, huge steal and big layup.”

Junior Ty Elliot-Moore led the way with 23 points, Sibley scored 16 and Jackson had 14 in the win. Sophomore Nadhir Ward had 16 and sophomore Mohammad Mohammad had 11 for Pottsgrove.

Led by Sibley they jumped out ahead 19-11 after the first quarter. He combined for 22 first-half points with Elliot-Moore to give the Trojans a 29-21 lead at the break.

Until a big fourth quarter for Pottsgrove, Pottstown’s defense was the key to the difference on Thursday. The Trojans held Falcons’ leading scorer Gabe Rinda, who scored 23 points in the first meeting, to just three points on Thursday.

“I feel like we were just ready for this game,” Elliot-Moore said. “We were locked in. The hype was up, motivation, all that. And we practiced for like three days on defense to guard him because he had all the points last time.”

The defense also led to offense for Pottstown, including two fastbreak slams from Jackson, who came in averaging 15.3 points per game in seven contests this season.

Pottstown built its lead up to as many as 16 points in the third quarter, grabbing a 44-28 advantage with 2:06 to play in the third.

Pottsgrove put together a last-ditch effort in the fourth, trimming Pottstown’s lead to six, 60-54, with 54.3 seconds left, but the Trojans’ defense came up with enough stops in the clutch to walk away with a rivalry win.

“We lost the last one by two and we definitely should have won that game,” he added. “We definitely came out harder and wanted the win.”