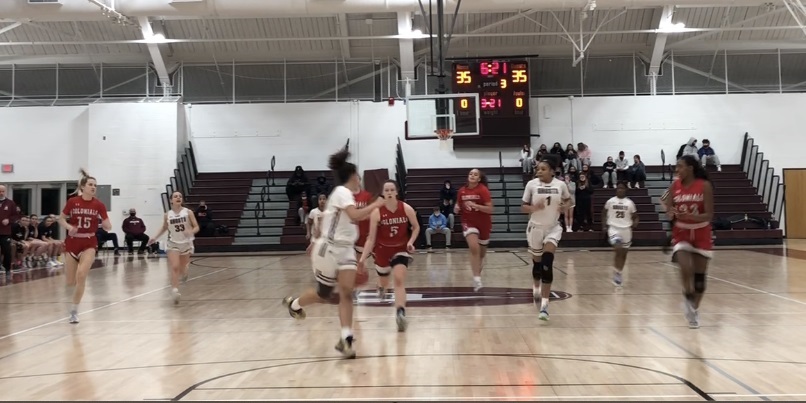 Plymouth Whitemarsh's Kaitlyn Flanagan (5) lead the break with Lainey Allen (33) while Abington's Cire Worley (1) and Jaida Helm (21) get back on defense during their game on Thursday, Jan. 27, 2022. (Andrew Robinson/For MediaNews Group)

Slowing down, especially against Abington and especially in the Ghosts’ gym, is hard to do.

For a half on Thursday night, Plymouth Whitemarsh was showing how true that can be as the normally poised and controlled Colonials were anything but despite landing a big right hook of a start in their clash for first in the SOL Liberty Division. PW is an experienced, mature team and had a couple factors in its favor walking off the floor at halftime but only if it could slow itself down.

That poise showed through as PW set its pace, found its advantages and withstood a fired-up Abington effort to collect a 64-57 win to stay unbeaten on the season.

“Their pressure defense was insane in the first half,” Colonials guard Abby Sharpe said. “The biggest thing, I felt like I was playing 1,000 miles per hour so I needed to take the ball, start seeing the floor and figuring out the next move instead of just catching and dribbling. Slowing ourselves down and staying calm is what we adjusted to in the second half.”

The game, which had been originally slated for Dec. 23 before an Abington shutdown postponed it, was one both squads had circled after their stellar starts to the season. PW (17-0, 12-0 division) and the Ghosts (14-2, 10-1) had combined for 30 wins between them and both feature several Division I caliber players but also contrasting styles.

While the Colonials have a really strong press defense, they are their best playing a more controlled pace, working the ball around and going inside to use their size advantage. Abington thrives off its chaos, pressing almost the entire game with wave after wave of small, scrappy and tenacious guards swarming to the ball and trying to force errors.

Early, Abington couldn’t handle the pressure though with turnovers on its first four possessions spotting PW a 10-0 lead. The Ghosts took the shot and got going, closing within four at the first quarter break, then taking a lead midway through the second.

‘“I think that was expected of us, we’ve already played this team several times in the past, so we knew the pressure was coming,” Abington junior Cire Worley said. “We didn’t get too far ahead of ourselves, we just had to back up a little bit, but it was our plan all along to figure that out.”

Worley was tremendous, scoring a game-high 33 points and her assist to Jaida Helm on a 3-pointer gave the Ghosts a 26-23 lead with five minutes left in the first half they stretched to 31-25 on Worley’s own trey at the midpoint of the frame. Both Worley and Helm picked up three personal fouls in the first half, incidentally both of them helping fuel a 6-0 finish by PW that tied the score 33-33 at the break.

For Colonials senior Jordyn Thomas, who only attempted one shot in the first half, it was a chance to start anew. She and classmate Lainey Allen, the Colonials’ 6-foot-1 and 6-foot-2 inside duo, took the opportunity to capitalize inside after the break.

“I needed to find myself and put that work in down in the post because that’s where we could put points on the board and possibly win the game,” Thomas, a Jefferson commit, said. “I knew I had to get in there and work.”

Senior Kaitlyn Flanagan, PW’s Holy Cross-bound point guard, was the right person to help slow the pace more to the Colonials’ liking. Flanagan started the third quarter with three straight assists to Thomas and Allen, with Erin Daley then assisting a fourth straight score inside.

Taking a cue from their floor leader, the rest of the Colonials calmed down and when they did get in trouble, they got the ball to Flanagan who continued to navigate the persistent pressure with a steady hand. Flanagan had eight points and six assists, but there’s no stat to chart the amount of energy she expended escaping traps, eluding double-teams, swerving an incoming help defender and still finding the next open player.

“Our guards finally slowed down a step, it was like, when you get it over halfcourt, just rock it back in triple-threat for a second and let our posts get there. That’s all due to the Abington style, makes you think you have a layup, then you take the extra step and extra dribble and three kids come in to take the ball from you.”

Sharpe, in the midst of a break-out season, tied her career high with 21 points and had one of the game’s biggest shots when she buried a 3-pointer on the left wing to cap the Colonials’ tide-turning third quarter run.

Worley didn’t hesitate to say her team is one that won’t quit until the final whistle and despite her four points being the only four Abington got in the third, the junior and the Ghosts opened the fourth on a 7-4 spree. Two technical fouls on the Ghosts, each following a made basket in the final quarter, did quell some momentum, especially with Sharpe connecting on three of the four free throws PW got as a result.

“We have to realize we’re faster than a lot of teams we’re playing and we’re going to have energy when they don’t. We can keep our composure by remembering we still have energy so when we make a big play, just do it again.”

Helm was the only other Ghost in double figures with 10, but Worley was already looking forward to the teams’ rematch at PW on Feb. 8.
Thomas had all eight of her points in the second half, adding 13 rebounds while Allen had 18 points and 11 rebounds and Daley added nine rebounds in a strong team effort on the glass, which also contributed to PW setting the pace in the second half.

“I feel like this was a good game for us and we needed this,” Thomas said. “I think most of all, it was a really big confidence boost for us. (Archbishop) Carroll, that was a big game we really wanted to win and did, so I think we brought that energy with us. This shows we’re here to keep going and we’re here to go all the way.”