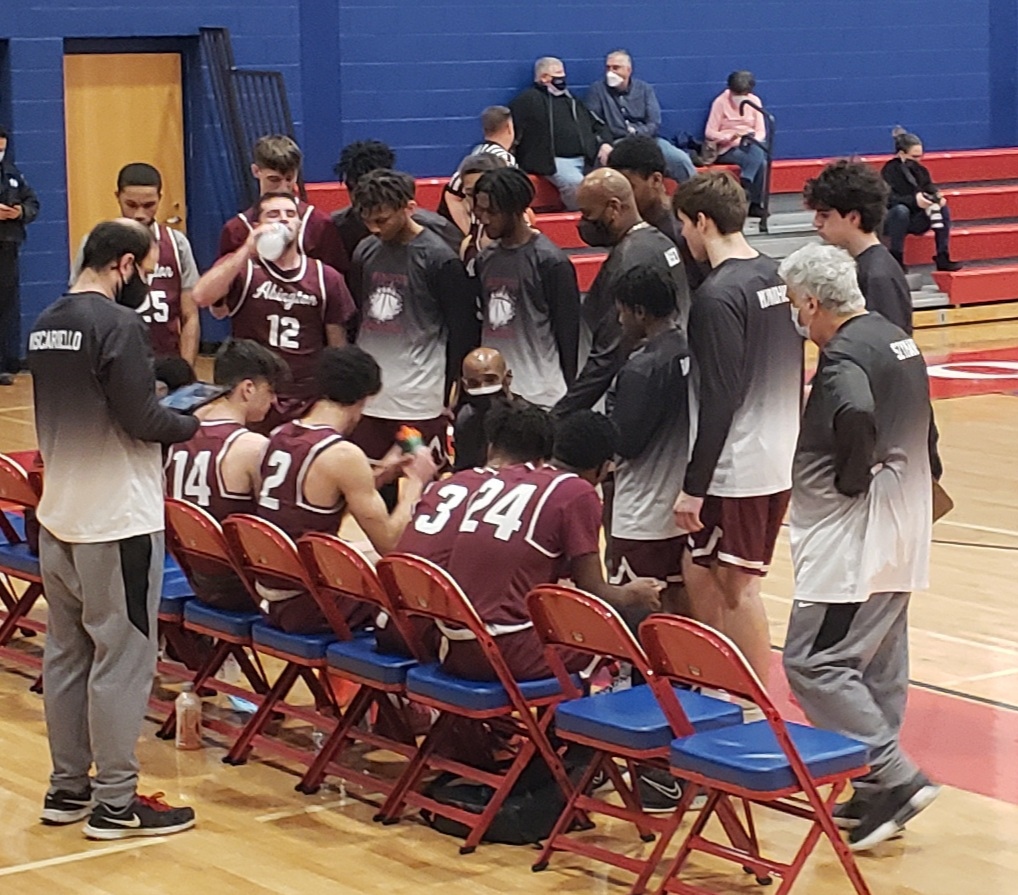 The senior shot 6-for-7 from long distance in the game with the biggest shot coming in the middle of the third quarter.

After Kahjel Morris hit back-to-back threes to cut into Plymouth Whitemarsh’s seven-point lead, Scutt buried a corner three in front of the Abington bench and was fouled. He made the free throw to put the Ghosts ahead by three and they led the rest of the way, holding off a late Colonials rally in a 72-67 Suburban One League Liberty Division win at Plymouth Whitemarsh High School.

“Fhenyx Scutt stepped up,” Abington coach Charles Grasty said. “He’s been shooting the ball really well the last couple games and in practice a lot. A lot of it right now is confidence and he’s getting that confidence and he’s knocking it down. I think he had six threes today and that’s what we expect from him. He’s a senior and he’s a very good shooter. I definitely thought we got the momentum when we hit a couple threes.”

The 10-0 run on three possessions gave Abington (9-6, 8-3 SOL Liberty) a 38-35 lead, their first since 18-17 early in the second quarter. Morris hit the first three when PW’s defenders were focused on double-teaming Derrius Lucas in the paint and denying an entry pass to 6-foot-6 center.

“We saw that they wanted to help out on Derrius,” Grasty said. “(Morris) is a great shooter… he can really knock it down. He hasn’t been shooting a lot in the games just because of the way our season has been going, but you know what, now he has a lot of confidence and hopefully he can keep this team going.”

Morris hit his second three from the top of the key before Scutt put Abington ahead with a catch-and-shoot triple from the left corner.

The Ghosts added one more point to their advantage to take a four-point lead, 49-45, to the fourth.

Plymouth Whitemarsh (11-6, 8-3 SOL Liberty) only made two three-pointers in the game – both by Jaden Colzie in the fourth quarter to get within three.

The first came with four minutes left to get PW within 59-56. Abington responded with a three-point play from Morris, a Lucas basket and a Connor Fields free throw to extend the lead to nine, 65-56, with 2:17 to play.

The second capped off a 7-0 run with just under 17 seconds left. After Marshall Baker and Colzie made layups to get within six, Colzie missed a three but Trey Jones grabbed the offense rebound. He got the ball back to Colzie, who buried the second attempt to make it 70-67 with 16.9 to go.

Abington senior Jimmy Marino split a pair of free throws to make it a two-possession game and Plymouth Whitemarsh was unable to score on the ensuing possession. Fields grabbed the rebound and went 1-for-2 from the line to make it 72-67 in the final seconds.

“(PW) made us blink,” Grasty said. “They just kept coming, they just kept bringing pressure, turned it over some, credit to them. They made some shots, got back in it, cut it to three. It was always a ballgame all throughout. I thought we made some key passes at the right times… It may not have led us to a basket, but at least it relieved the pressure and that’s what we were talking about.”

“You don’t let people walk in your house and drop 72 points on you in an important game,” PW coach Jim Donofrio said. “You don’t. That’s not the standard you’re working hard to achieve. We’re better than that, at least we like to think we’re better than that. At some point, there’s an extra five percent in these kids and they don’t quite know what that feels like yet. We have to get that extra five. They’re not selling out. They’re getting blocks instead of offense fouls. Why? Because they’re blinking, because it might hurt. We don’t have a 6-foot-11 shot blocker. That’s the difference between 10 points in the game.”

Lucas scored nine of his 21 points in the second half. After scoring six points in the first quarter, Lucas picked up his third foul halfway through the second. He scored six more points in the third before hitting four clutch shots to help the Ghosts stay ahead in the final quarter.

“Early on, picking up fouls was hard,” Lucas, who grabbed nine rebounds, said, “but coach told me get back on the court and we’re going to need you. I just tried to give my team everything I have to give us that boost. PW was coming in on a win streak, it was a big win for us. I knew we needed it.”

Abington jumped out to a 16-13 lead after the first quarter behind eight points from Scutt.

“In the first quarter there’s an opportunity to maybe put 18 points up,” Donofrio said. “We’ve been working on jump-stopping like crazy and pump faking. We jump-stop and pump fake hyper as if we are afraid to get contact. Then it’s a no-call.You have to toughen up.”

PW scored the final basket of the first quarter to start a 14-2 run that resulted in a 25-18 lead. Colzie and Baker each had six points in the second quarter while Taji Hubbard had four to build a 33-26 halftime advantage.

Five different Colonials scored in double figures. Colzie led the way with 16 while Zende Hubbard and Qudire Bennett each had 14, Baker 12 and Taji Hubbard 10.

Donofrio believes his team will learn from Thursday’s loss and be better for it in the final weeks of the regular season and, hopefully, the District 1-6A playoffs.

“We have to use this to get that much more serious,” he said. “They’re really happy-go-lucky guys and happy-go-lucky people are wonderful, but unfortunately if you’re happy-go-lucky and you decide to walk into a really competitive world, you’re going to get stung a lot until you either toughen or get out of that world.

“We’re not sure of ourselves yet. We’re rolling in and missing point-blank layups. You’re not ready for primetime guy. I think they can get there if time doesn’t run out. This has to be a catalyst for that. This has to hurt a lot. When we’re rolling, we can be as good as anybody around. I just don’t know if we have enough time to win and stay intense enough to keep improving.”