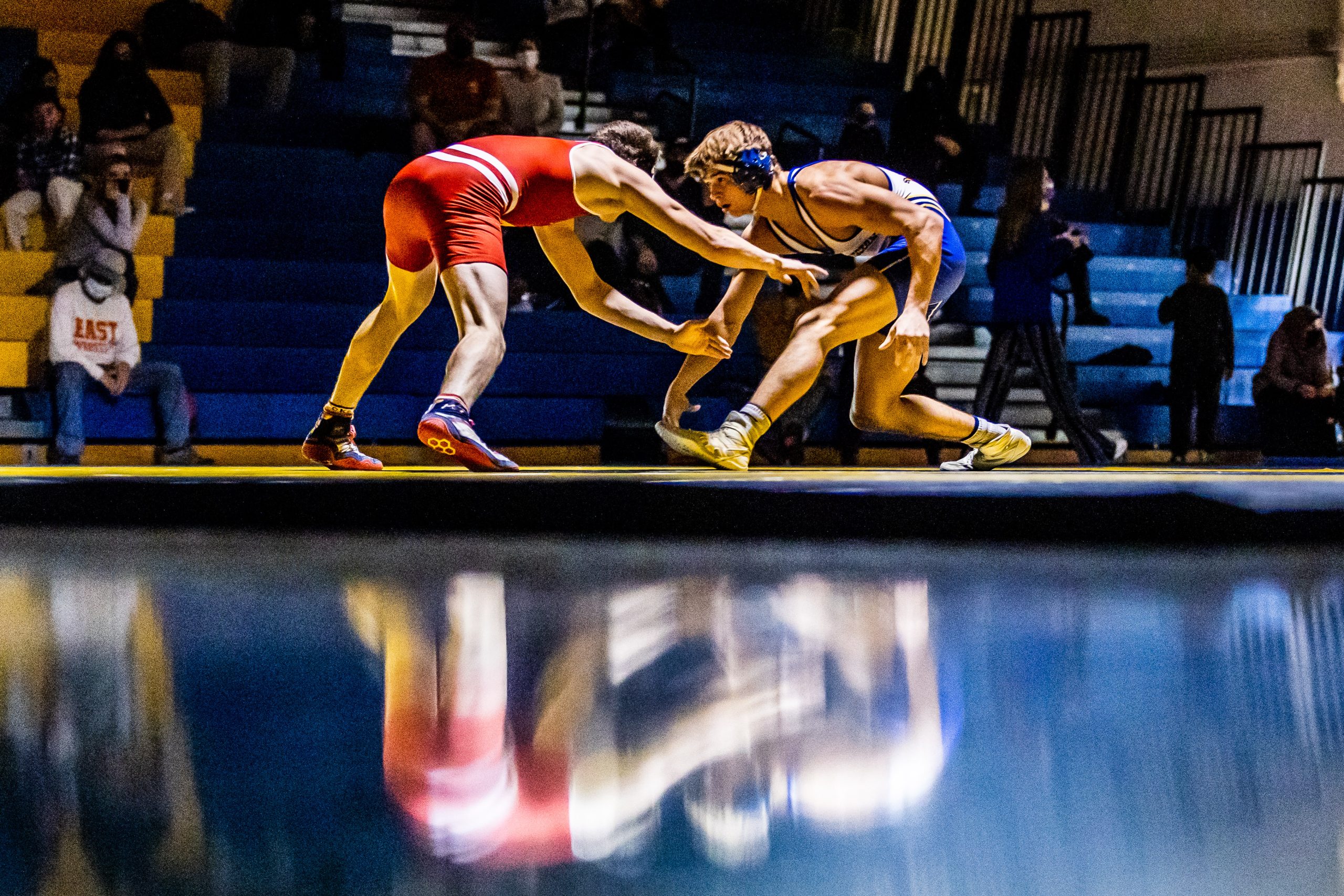 After missing out on the Ches-Mont Championships last year because of the pandemic, the league wouldn’t let winter weather completely ruin the fun this year.

The tournament, originally slated to happen Saturday, is postponed until Sunday, with a start time of 10 a.m. at Oxford High.

Since District 1 eliminated league tournaments as a postseason qualifier ahead of the 2019 postseason, the Ches-Mont has continued the tournament during the regular season to find out who’s who when the American and National Divisions collide.

West Chester Henderson has won the last two team titles, and after the tournament was cancelled last year due to the pandemic, the Warriors are considered the favorites once again.

The tournament will run straight through, and the top six will be awarded medals. In an effort to fill as many 12-man brackets as possible, some weight classes have double entries from teams.

Here’s a look at the 13 weight classes:

Per usual, six of the nine wrestlers are freshmen in this bracket. Downingtown West’s Chase Sigle is currently ranked No. 5 in District 1 (on pa-wrestling.com) and is the No. 2 seed. His biggest threats appear to be on the top half of the bracket. Top-seeded Cole Haines from Unionville has 20 wins, and if he reaches the semifinals, he’ll see either Henderson sophomore, Ryan Schalleur, and Sun Valley’s feisty freshman, John Deorio.

Coatesville’s Andrij Szczesniuk arrived with little fanfare — maybe because people were afraid to spell or pronounce his name — but he has been a welcomed freshman for the Red Raiders. He gets to introduce himself to the league as the No. 3 seed, and has Unionville’s Mason Coursey on his side of the bracket. Sun Valley sophomore, Timmy Kearney, is the top seed as a returning regional qualifier. While this weight lacks star power, there are a lot of solid wrestlers with some experience that should make for a fun consolation bracket.

There are three undefeated wrestlers in this tournament, and two of them are in this bracket. Oxford’s Cannon Hershey is 18-0 and the No. 1 seed as a two-time state qualifier, and Sun Valley’s Shane Holefelder is 17-0 is No. 2. Hershey is making his season debut at this weight, dropping from 126. Henderson’s Carmen Cortese is on Holefelder’s side, and up top, with Hershey, are some motivated underclassmen, such as Kennett’s Kane Lengel and Downingtown West’s Kevin Bernhard.

Hershey’s drop makes this weight a bit more wide open, though Henderson’s Max Jackman has the best resume and sits as the No. 4 seed. Great Valley’s Brandon Son is up top with Jackman as the No. 1 seed. Oxford’s Reiland Canaday is now at this weight and is the No. 3 seed after wrestling 132 and 138 all year. Coatesville’s Malik Lavalais is down low, with Canaday.

A clash of styles may happen in the finals here, if Henderson’s Billy Wilson and Oxford’s Austin McMillan meet. Wilson is long and always look for an opportunity to clamp someone in a cradle while McMillan is more compact would love to roll around and see who ends up on top. McMillan would likely first have to get through Sun Valley’s Danny Kearney, who’s having a bounce-back senior season. Great Valley’s Tim Matthews is the No. 4 seed, up top, but Henderson’s freshman, Hunter Delaney, is the No. 12 seed as a double entry, and he just might put himself in a spot to face his teammate, Wilson, in the semis.

Downingtown West’s Dom Findora is the only returning state medalist in the tournament, so he’d have been the heavy favorite no matter who was at his weight, but when West Chester East’s Max Parnis bumped up to 145, Findora is left with an unsung bracket. Henderson’s Matt English and WC East’s Jefferson Cooper should duke it out to find Findora in the semis, while Coatesville’s Evan Seagreaves and Sun Valley’s David Voghel are the No. 2 and 3 seeds, respectively.

As previously mentioned, Parnis bumped up for this tournament, but caught a tough break getting seeded fourth. That means he’s on the same side as Henderson’s top seed, Palmer Delaney, as well as Downingtown East’s Noah Pagaduan, who moved from New Jersey and is 5-0 against Ches-Mont foes. On the lower half, Sun Valley’s Alex Gamble-Williams is No. 2 and Kennett’s Tyler Maier is No. 3. Unionville’s Jackson Roberts is looking to go out with a bang, as a senior, and West’s Jordan Barry is hoping to make a name for himself, as a sophomore, and they are both on the bottom half.

Unionville’s Topher Tryon gets his first taste of the league tournament, as a junior, and is the top seed. He should reach the semis, where he’ll likely see either No. 4 Ryan Loraw of Downingtown East or No. 5 Garrett Landon of Avon Grove. Landon defeated Loraw, 7-1, Wednesday. Kennett’s Josh Kochersperger is having his best season, as a junior, and is the No. 3 seed, but he’d have a tough task getting past No. 2 Brett Patton of Henderson. Great Valley’s Nick Mort is also on Patton’s half of the bracket.

There are only four wrestlers with winning records here, as the depth begins to wane in the back half of this tournament. Kennett’s Josh Barlow is a 20-match winner and the top seed, and he likely sees Unionville’s Andrew Julier, to reach the finals. On the bottom half, West Chester Rustin’s Ryan Corp hopes to settle in at this weight, having made his debut here, Wednesday. He’s the No. 2 seed, while WC East’s Rhys Holvey is No. 3.

For the second weight in a row, Kennett claims the top seed, with Darrale Barrett, a returning state qualifier, setting himself up as the one to beat. Downingtown East’s Connor Huntoon hopes to challenge him as the No. 4 seed. Second-seed, Chris Yanko of Rustin, gave this weight a try, Wednesday, and pinned No. 3 seed Ryan O’Leary of Unionville. Rustin has yet to figure out exactly who will go where for the postseason, but Yanko figures to be favored to see Barrett in the finals.

With Yanko at 172, Rustin’s Marek Seaman is the top seed here, as a returning state qualifier. He’s 4-0, having won three at 189 and the other at 172. One of his wins was against the No. 2 seed, Chase Thompson of Sun Valley. Thompson has a win over No. 3 Jeremy McKinney of Oxford, and they appear destined for a rematch in the semis. There are a couple of youngsters with potential, here, with No. 4 Matt Luton of Coatesville and Downingtown East’s Tommie Grizzanti. West Chester East senior, Tyler Sbur will do his best to hold them off.

Kennett’s third and final top seed is sophomore, John Pardo, who is 22-2. He has not been challenged a ton this season, but should find one in the finals against West’s Mason Hale, who’s bouncing back from an uninspiring sophomore campaign. Hale is the No. 2 seed and is on the same side as Sun Valley’s Anthony Laird. Henderson’s Wyatt Hampton and WC East’s Jacob Sbur have split two matches this season, and they could break the tie in the quarterfinals, if the seeding holds.

The big boys should make for a competitive bracket, with seven of 11 entrants being double-digit winners. West’s Troy Mack got the top seed with 24 wins. He and Kennett’s Bailey Shindle appear to be a on a collision course to meet in the finals, but there are some roadblocks for both. Henderson’s Liam Keevil, the No. 3 seed, is stingy and could slow Shindle down, and Rustin’s Anthony Meadows is a good athlete at a higher weight after not wrestling last season. Coatesville’s Dylan McGuire is the No. 4 seed and wants to avenge a pin by Mack, Wednesday.