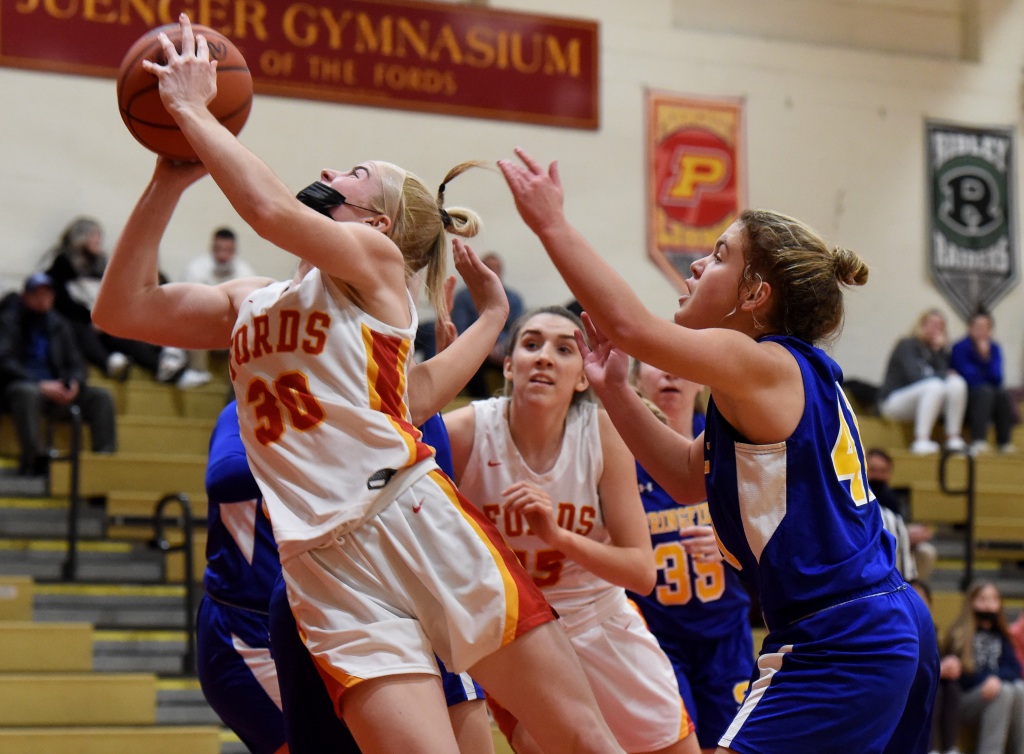 HAVERFORD — Emma Rowland and the Haverford girls basketball team spent a lot of time practicing their foul shooting this week. The Fords have been inconsistent in that area this season.

“Two practices ago, all we did was practice our foul shots,” said Rowland, a senior guard. “If we missed, we ran.”

A trot around the gym seems like the appropriate penance for a missed freebie, especially a team intending to make a run at a Central League championship.

It had been a long while since Haverford (or anyone else, for that matter) had beaten the Cougars. Prior to Friday, they had won 25 consecutive Central League games dating to the start of the pandemic-shortened 2021 campaign.

Williams ensured that streak wouldn’t extend another day. The senior guard was 5-for-6 at the free-throw line in the fourth quarter as Haverford claimed a 33-28 victory at Juenger Gymnasium.

“I’ve been working on free-throw shooting a lot, probably for about an hour the last few practice, so I stepped up to the line with a lot of confidence and I was really ready to put them in,” said Williams, who got all of her points from the charity stripe.

This was a signature win for the Fords (10-4), who have tough losses against Conestoga, Marple Newtown and Radnor this year. Their battles with Springfield in recent years were close, too. Last season, for instance, the Fords fell on a buzzer-beater by Alexa Abbonizio.

“For the seniors, we have not won against Springfield and we were preparing for this game for weeks now,” said Rowland, who scored a team-high seven points and grabbed eight rebounds. “It means so much to us that we finally overcame our weakness.”

It wasn’t pretty, but the Fords accomplished their mission Friday.

In typical Haverford-Springfield style, the defenses came to play from the jump. The opening quarter featured more combined turnovers (six) than total points (four). Springfield point guard Mia Valerio made two free throws and one field goal. That was all … for both teams. The score was 4-0 Cougars.

Haverford trailed 7-0 before it cracked the scoreboard with a Sky Newman free throw 5:14 before halftime. Aniya Eberhardt made a runner with 4:11 left for Haverford’s first field goal.

“We knew the shots were going to start to fall,” Williams said.

Haverford’s Maddie WIlliams and Springfield’s Kaitlyn Kearney sprawl on the floor for a loose ball during the first half of their Central League game at Haverford’s Juenger Gymnasium Friday evening. (PETE BANNAN – DAILY TIMES)

Junior forward Caroline Dotsey, who had five points and 16 rebounds, made a foul shot in the waning seconds to put Haverford up 11-10 at the break. The Fords never relinquished the lead.

“We were trying our best because they always play us man-to-man every year and we were trying to figure out when they were going to press us,” Rowland said.

The full-court press came in the second half. Haverford did a good job breaking it and keeping from committing too many turnovers. Williams and Rowland were the ones fighting off pressure from Springfield’s guards and getting the ball beyond half court in 10 seconds or less.

“That’s what we were focusing on most because we can get a little frantic when we see two girls coming up,” Rowland said. “It was really important for us to take our time and keep your head up court.”

Springfield’s Mia Valerio, right, makes a move during the first half a Central League game at Haverford.

Anabel Kreydt (five points, 14 rebounds) and others did an excellent job of double-teaming Dotsey, who is one of the top low-post players in the Central League and the Fords’ top offensive weapon. Every time Dotsey got the ball, two or three players flocked to her. She missed her first nine shots from the field, but made a lay up with 3:20 to go in the fourth to extend Haverford’s lead to 26-21.

Penncrest 59, Upper Darby 37 >> The Lions shot the ball well in the first quarter and jumped out to a 21-6 advantage. Bailey Garrison netted 14 points and Kathryn Harding tallied 13.

“I feel we did a really nice job handling the press but just had no luck with the ball falling for us tonight,” UD coach Nick Liberio said. “I feel we played our best game of the year limiting our fouls, turnovers and handling the press really well. Though we had our chances, we struggled putting the ball in the basket. Credit to Penncrest as they shot the ball at a high level and played up close  pressure defense.”

Marple Newtown 51, Ridley 40 >> Nikki Mostardi poured in 17 points for the visiting Tigers, who overcame a 17-8 deficit after one quarter to win their eighth straight game.

Kyla Carney led the way for the Green Raiders with 13 points. Kailyn Bell and Amirah King had six points each.

Lauren Goldberg and Maryella Gill had five points each for the Panthers.