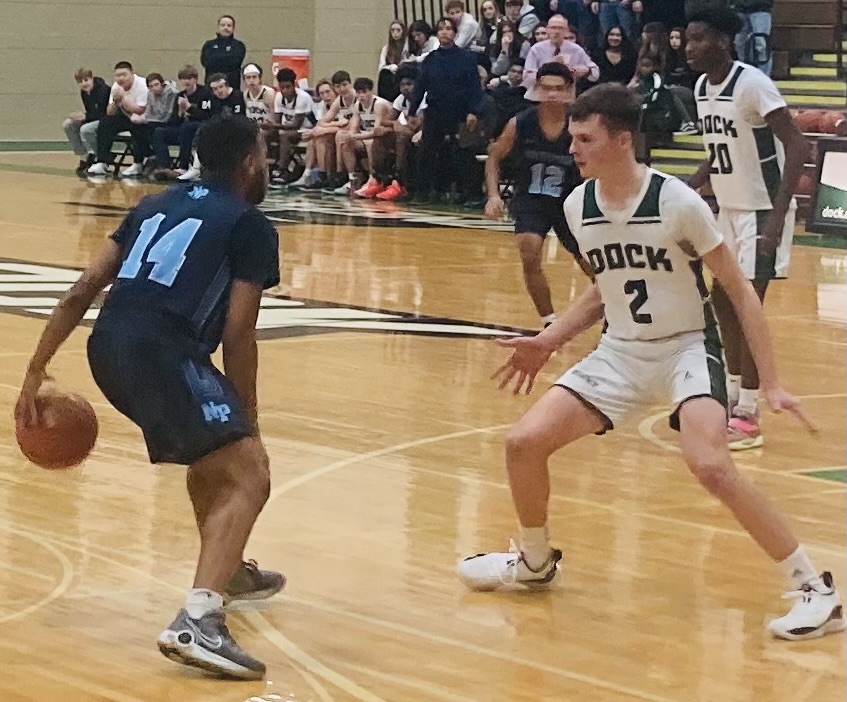 TOWAMENCIN >> A 14-0 hole didn’t diminish the Knights on Saturday.

They just got out their shovels.

“We just put our heads down and kept going,” said junior Ryan Deininger.

North Penn overcame its early deficit to crosstown rival Dock, battling back for a satisfying 59-56 victory in a non-league contest that pushed the Knights back to .500.

“I wanted to win. Coming out of halftime, I felt great,” said Deininger, who scored 16 of his team-high 17 points in a big second half. “We had been struggling in the fourth quarter all year. Today we flicked a switch and started playing great.”

“This is huge, man,” Deininger said of the win. “It puts us back to .500, and it’s gonna be big for getting into the playoffs.”

After trailing by two at the half, the Knights pushed ahead in the third, layups by Deininger providing leads of 34-32 and 36-34. Deininger had eight points in the quarter, and the Knights would maintain a two-point edge heading into the fourth.

Five different players contributed points in the final frame and many offered other contributions. Terhan Wright scored off a rebound to make it 41-38 North Penn, and Deininger’s three with four minutes to play put the Knights ahead for good, 46-44.

Norman Gee and Ryan Zeltt each hit a three for North Penn and Deininger’s three-point play with just under a minute to go stretched the lead to 57-49.

A pair of threes by Nathan Lapp, who had the game high with 20 points, brought the Pioneers closer, but Mario Sgro’s foul shots with a second left seemed to put it out of reach at 59-56.

Amazingly, Dock’s Tomir Johnson managed to get a decent shot off, throwing full court, but the ball bounced off the back of the rim, and North Penn had held on.

“Just proud of the way we responded,” Knights coach John Conrad said of the comeback. “The kids played tough and went through a lot of adversity today. Defensively, we did a much better job (as the game went on). We had a string of games where we lost five out of six, with it just coming down a couple mistakes in the fourth quarter. I thought the last two nights (including Friday night’s win over Council Rock North), we’ve played better down the stretch.”

Dock was in control early.

Hoyt Bultje (15 points) and Lapp were getting to the basket, and a jumper by Lapp put the Pioneers further in front.

By the time Tomir Johnson scored in transition and Lane Bergey buried a jumper, the Dock lead had grown to 14-0.

But then the Knights began to chip away.

A free throw by Wright gave North Penn its first point with two minutes left in the first quarter. Milind Pulugura hit a three and Wright added a basket to trim the margin to 14-6 after one.

The Knights continued their push into the second quarter, with a layup by Gee and a three by Eric Sava drawing NP closer.

Tomir Johnson hit a three for the Pioneers to regain some of the momentum, and Tony Martin’s weaving drive through traffic provided a 26-24 edge at the break.

But North Penn got it done in the second half, the defense provided by Zeltt stabilizing things down the stretch.