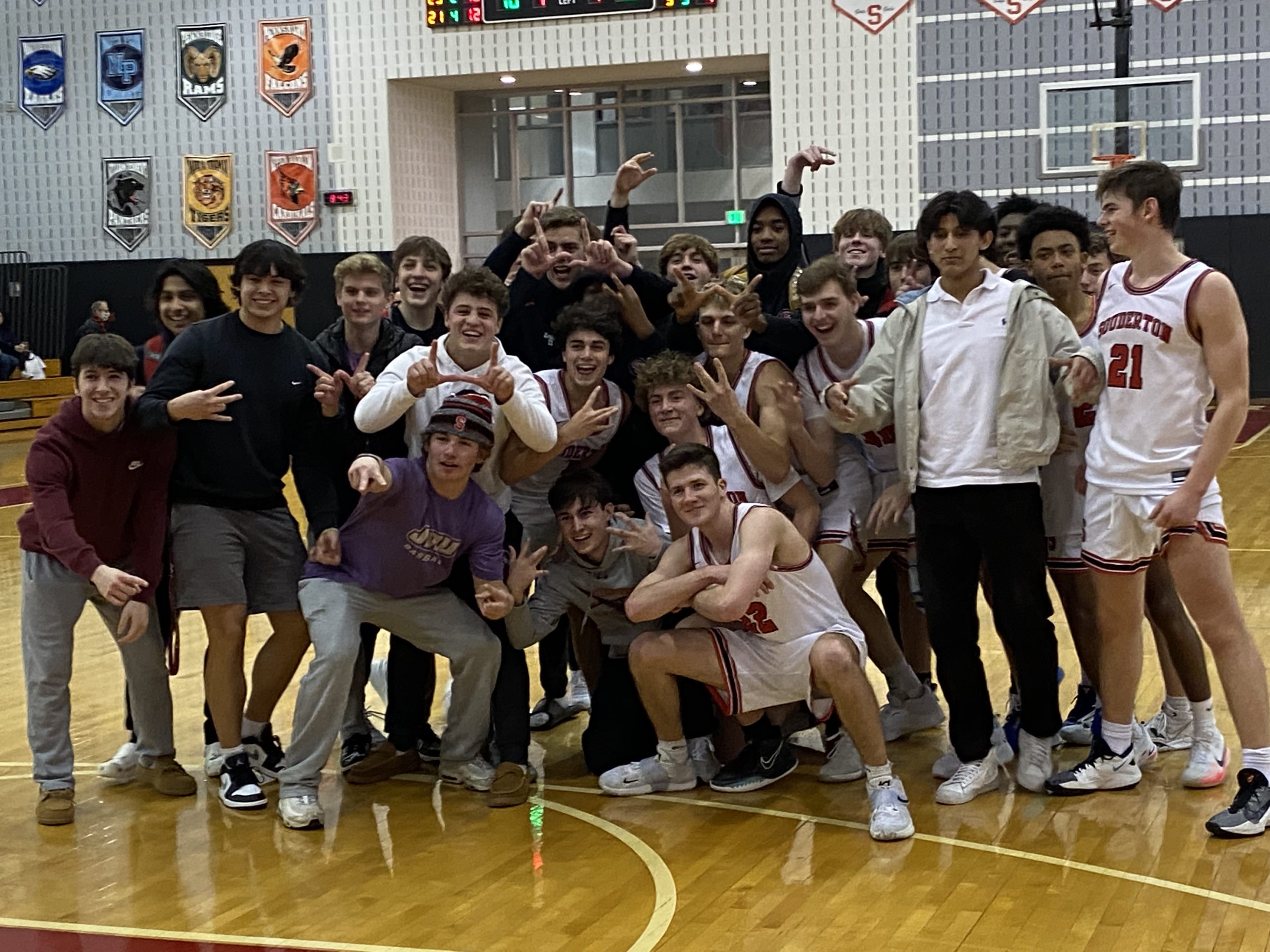 FRANCONIA >> The Souderton boys basketball team erased late deficits in both the fourth quarter and overtime. The Indians avoided having to do it again by never trailing in the second extra session.

“Our coach is like this is our house, we’re not going to let some other team come in here and take it to double overtime and win it – there’s no way.” Souderton senior Jay Bonnet said. “So I think him hyping us up and giving us good plays to run and it gave us good energy going into the second overtime and I think that’s why we took over.”

Down four in the final minute of regulation, the Indians rallied to take a one-point lead but a free throw from visiting Council Rock South with 1.8 seconds meant Friday night’s Suburban One League crossover contest required four more minutes.

With Big Red behind 49-46, Levi John’s clutch 3-pointer forced a second overtime, where the junior drained another three to give Souderton the lead for good. The Indians scored the period’s first 10 points, pulling away to outlast the Golden Hawks and earn a 60-54 victory.

“I was coming off the confidence of the first made three to send it to the second overtime so I was like I’m just going to shoot it again, it’s another good looking shot,” John said. “It gave us the confidence to get Jay dunk later in the overtime and then we just took the game from there.”

BOYS #BASKETBALL: @souderton_bball’s @aleksjsmith finds Levi John for a 3-pointer from the right wing for a 52-49 lead in double overtime vs. Council Rock South. pic.twitter.com/MXId8tJp4N

Bonnet’s breakaway one-handed slam put the home side up 57-49 and was the final two of his game-high 24 points – 10 of those coming in the third – as the Indians (10-5, 5-5 SOL Colonial Division) stopped a two-game skid. Aleks Smith added 14 points while John scored all 10 of his points after halftime.

“That was definitely the craziest game I’ve ever been in,” Bonnet said. “We had a lot of chances to give up and we didn’t – we weren’t losing that game, there’s no way. So really proud of my teammates for helping me pull that one through.”

Gavin Holloran recorded 13 of his team-high 19 points after the break for CR South (7-8, 3-7 SOL Patriot), which lost its third straight. Shane Dawson finished with 12 points.

“It was definitely a good win,” said Bonnet, who made four 3-pointers. “We’ve had a couple games where we haven’t been hitting our shots in some games, our defense has been lacking but we really worked on it in the past couple practices and we came back and I think we played so good tonight. It was great.”

BOYS #BASKETBALL: @souderton_bball’s @JayBonnet1 with the breakaway one-handed slam to give Souderton a 57-49 lead over Council Rock South in double overtime. Bonnet finished with a game-high 24 in the Indians’ 60-54 win. pic.twitter.com/I5t1SLpZP8

Souderton led 37-30 after three quarters but Council Rock South started the fourth with a 9-1 run, Matt Robinson’s 3-pointer at 4:10 putting the Golden Hawks up 39-38 for their first lead since 8-6 in the first quarter.

A Bonnet free throw tied things at 3:49 but South’s Shane Dawson drove baseline and found Holloran in the lane for a basket and a 41-39 advantage. Holloran then made both ends of a 1-and-1 with 52.2 seconds left to push the lead to four.

The Indians were called for a travel at 37.3 seconds but got the ball back after a South midcourt turnover – Bonnet driving to the net, scoring and drawing the foul at 32.6 seconds. He converted the 3-point play to pull Souderton within 43-42.

“I saw the ball on the ground and I saw, I think someone dove for it when I was going to grab it, I picked it up and I was like I got to take this to the hoop,” Bonnet said.

South threw away the ensuing inbounds pass, the ball collected by Smith with Big Red calling a time out at 29.5 seconds. Smith banked in a shot down low off a Chris Towsen assist and was fouled with 16.2 seconds left for a 44-43 lead.

Smith could not complete the 3-point play, Dawson rebounding the missed free throw to give South a chance to win in regulation. Stock was fouled on a shot inside with just 1.8 seconds left – he hit the first from the line but was off on the second and a jump ball on the rebound was ruled after the buzzer.

Anthony Burns scored and drew a foul – he did not make the free throw – to have Council Rock South leading 47-46 in the first overtime. Two Matt Robinson foul shots at 2:29 put the Golden Hawks up three but John knocked down the tying three from the left corner off a Towsen assist.

“Chris drove and he found me corner, it was a great pass right in the hands,” John said. “It was cash.”

BOYS #BASKETBALL: @souderton_bball’s @aleksjsmith banks in a shot off a @ChrisTowsen assist & draws the foul to put Souderton up 44-43 with 16.2 seconds left 4Q vs. Council Rock South. pic.twitter.com/k966etPwlQ

CR South had the final look in the first OT but its 3-point try went long.

In double OT, Smith kicked a pass out to John on the right wing and the junior buried a three for a 42-39 Souderton lead.

“Aleks he was going inside all game so he had three people on him I think and then he knew he had to pass it out because he’s going to get triple teamed so he hit me and I was just ready for it and I just made it.”

A Towsen free throw with 1:17 left put the Indians up four with Towsen hitting a pair at the line at 59.0 seconds for a 55-49 advantage. After Bonnet’s dunk, another two Towsen foul shots at 24.1 seconds made it a 10-point margin before a Dawson basket ended the run.

In the second quarter, a Holloran jumper off an offensive rebound knotted things at 15 before the Indians scored the next seven on a James Blair 3-point play at 3:19 and baskets from Smith and Bonnet for a 22-15 lead.

A Robinson jumper had South down five before a Shaun Purvy free throw at 8.5 seconds made it 23-17 Big Red at halftime.

BOYS #BASKETBALL: @souderton_bball forces a turnover and @JayBonnet1 drives to the hoop, scores & draws the foul. He made the free throw for the 3-point play to pull Souderton to within 43-42 of Council Rock South with 32.6 seconds left 4Q. pic.twitter.com/CDtNEy5yJN

Bonnet put Souderton up 30-21 in the third with a 3-pointer but Holloran answered with a trey. Another Bonnet triple made it 35-37 Indians before a Holloran 3-point play at 1:50. Bonnet scored on a drive to give Souderton a 37-30 edge going to the fourth.

Baskets from Dawson and Robinson sliced South’s deficit to three. After a Smith free throw at 6:30, Holloran drove baseline and found Stock in the lane for two. Robinson’s three off a Holloran assist had the Golden Hawks leading 39-38.

A Bonnet foul shot pulled Souderton even at 3:49 but Holloran put South back ahead 41-39 with his two free throws at 52.2 seconds putting the visitors up four, their largest lead of the night.