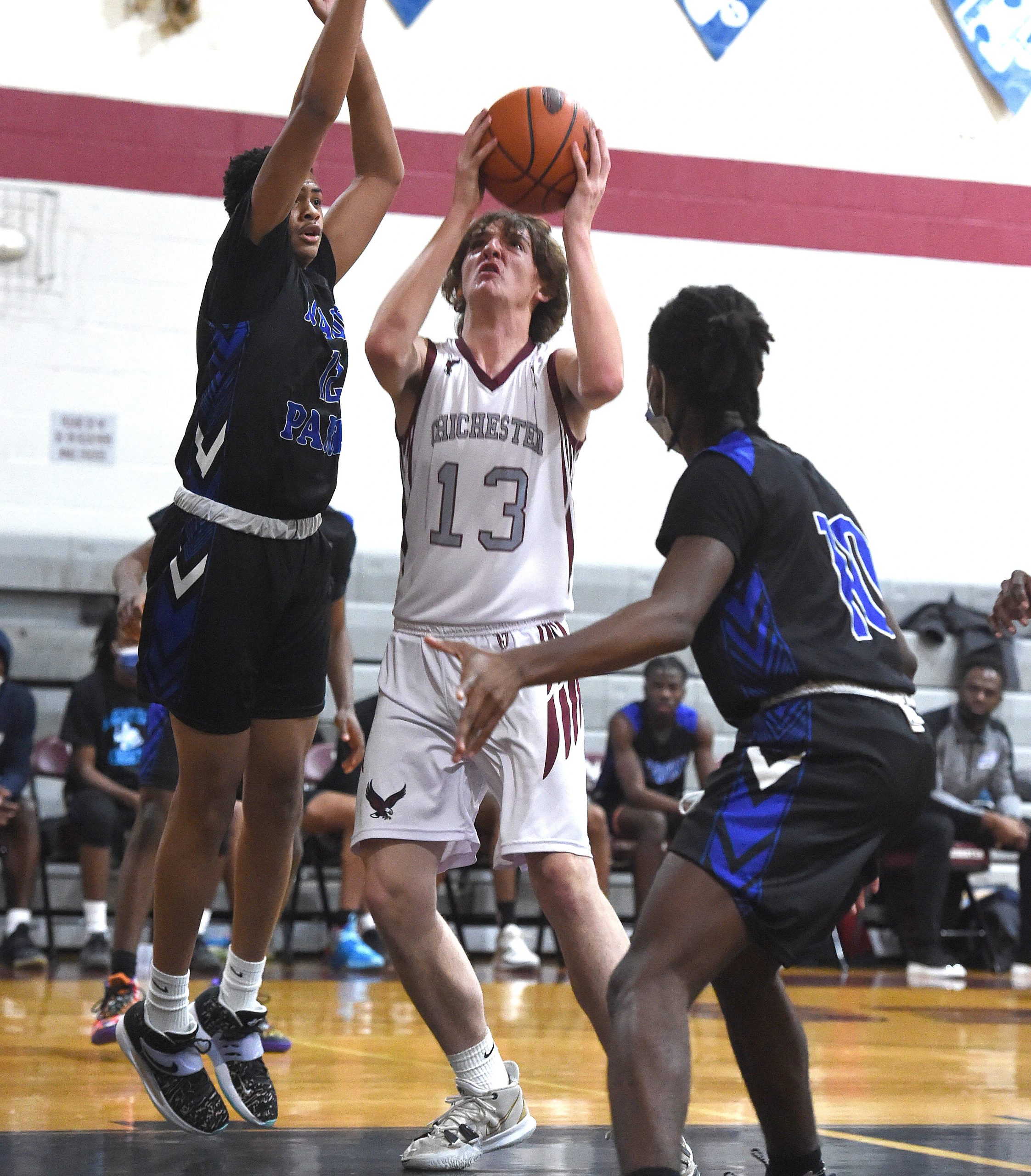 UPPER CHICHESTER — Vince Wildrick felt the pressure and knew just how to react.

It was a rare frantic possession by Chichester in the second quarter Thursday night against Academy Park. The ball found its way to Wildrick near the top of the lane, where he’d been camped all night in the soft middle of a 2-3 zone that Chi eventually forced the Knights to abandon. When his man overplayed him on his right, Wildrick dug into his bag of tricks, hitting his defender with a spin move and banking a left-handed shot off glass and in.

It was an early sign that everything was going the way of Wildrick and Chi.

Behind a pair of 15-2 runs in the first half, Chichester created early distance on the way to a 68-30 rout of a green Academy Park side. Widrick’s role in Chi’s patient and thorough dismantling of AP showed in that roll to the glass and in so many smaller instances on the night.

“That’s one of my go-to moves,” Wildrick said. “If they’re pressuring me, I go by and drop step. It’s one of my favorite moves. I just felt the pressure, I felt them overplay me, step through and it’s just natural.”

Wildrick was 6-for-7 from the field, including 4-for-4 from inside the arc. He hit a pair of triples for Chichester, which shot north of 50 percent (24-for-43) from the field. His willingness to take the open looks given to him was just one component of Chi’s comprehensive effort, and it’s something Chi coach Clyde Jones has harped on from one of his veteran leaders all year.

Chichester’s Eddie Swinton goes for a layup in the first half of a 68-30 win over Academy Park Thursday night. (PETE BANNAN – DAILY TIMES)

“If I can get it up, they want me to shoot it no matter what,” Wildrick said. “If I knock one or two down, the confidence shoots right up, and I’m pretty confident before the game anyway.”

“When Vince hits 3s, we’re going to win every game. That’s my opinion,” point guard Maz Sayed said. “Vince is a good shooter. I want him to shoot every game.”

Wildrick and his teammates earned their open looks. Rebounding was a big reason, as was a 2-2-1 three-quarter-court press that forced 11 turnovers but more importantly turned up the pace on a young AP team and forced rushed shots. It meant the Knights, who start two sophomores and are short on varsity experience not having a season in 2020-21, never settled into an offensive rhythm, trailing 15-2 out of the gate.

With the ball, Chichester is committed to making the extra pass. It had 15 assists on 24 made baskets. With Wildrick and Isaiah Diggs, they got players into the middle of AP’s zone and were able to kick out to the wings, keeping AP’s defense moving. Combined with Sayed and Eddie Swinton (team-high four assists) making smart decisions on the ball, they committed just eight turnovers.

“We need to keep having good ball movement because if we put up the first shot, it lets teams get out and run,” Sayed said. “If we get ball movement, we can get easier buckets.”

Sayed scored 14 points, including 12 in the first half, to go with five rebounds and three helpers. Diggs added eight points, able to blow by defenders on the bounce. Zaiyin Keys hit three 3-pointers in the first half to tally 11 points. Swinton scored five points.

“We’re a long team, so that’s how we get our stops,” Sayed said. “That three-quarter press helped us win the game.”

Foul trouble in the first half kept AP from pressing in the full-court, coupled with a chippy game featuring five technical fouls where tempers were perpetually close to boiling over, even with a second-half running clock. Najee Shaw added five points for AP. Jamir Anderson scored three points to go with three assists and two steals.

Wildrick and Sayed are two of three juniors who start for Chichester, though both have gotten playing time since their freshman years. Sayed was the team’s second leading scorer last year, behind 1,000-point man Josh Hankins. As a group, much of the current crop of Eagles has played together since fifth grade.

It breeds trust, which makes for an impressive product when it all comes together.

“ In practice, that’s what we emphasize,” Wildrick said, “taking our time, passing up the good shot for a great shot.”

Chester 81, Interboro 59 >> Larenzo Jerkins scored 22 points and added 17 rebounds as the Clippers overturned a one-point halftime deficit with 51 points in the second half. For Jerkins, both totals are career highs.

Breilynd White tallied a career-best 16 points. Terrence Cobb provided a big boost off the bench with 12 points for the Clippers (7-3, 3-0).